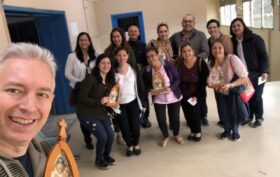 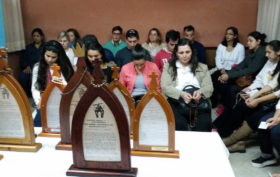 PARAGUAY, by Maria Otilia and Héctor Fleitas • The IPS Mission takes place on first Saturdays at Social Security Institute (IPS) Central Hospital. It begins with Fr. Martín Gómez commissioning Eucharistic Ministers, and Rosary Campaign missionaries. The several people who are involved in this apostolate go through the building’s eight floors taking the Eucharist, visiting the sick, and their relatives with the Pilgrim Mother.  When the priest participates, he administers the sacraments of anointing of the sick and reconciliation. The mission concludes with praying a Holy Rosary in the chapelRead More