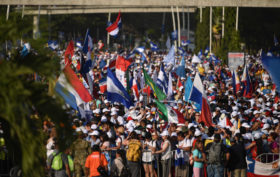 “I am the servant of the Lord. May it be done to me according to your word” – Opening Mass of the WYD

WYD PANAMÁ, Maria Fischer • “We thank God for hosting the first World Youth Day where Mary – “the star of evangelization” – has been proposed to you as a model of courage and courage, who was available to fulfill God’s plan , for the one who had chosen her and whose response is the motto of this WYD: “Behold the handmaid of the Lord, let it be done to me according to your word.” During the opening Mass of the World Youth Day (WYD) Panama 2019, the local Archbishop,Read More

A year of miracles for refugees with San Egidio

ITALY/EUROPEAN UNION, by Álvaro Real, vía Aleteia.org • 700 people have been taken in during the last year, thanks to the humanitarian corridor made possible by the San Egidio Community.  This is a record number if we take into account the statistics of refugees being taken into European Union countries. This initiative has made it possible to take in more refugees in 2016 than those taken in by the 15 countries of the European Union. This project has had unprecedented success after just one year in existence, and allows refugeesRead More