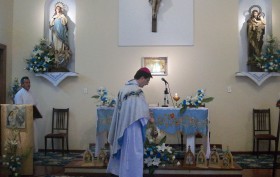 ARGENTINA, Sr. M. Esther and Cecilia Mata • On 8 December, the hospital oratory that is close to the Belgrano Shrine was re-opened. A picture of the Blessed Mother and the Divine Mercy along with the Unity Cross are also there. A little bit of history The oratory of Pirovano Hospital was born at the hands of Mary’s Volunteers as mature fruit of the 20 January 1992 Jubilee. At the beginning of that year, leader and founder of the Mary’s Volunteers, Mrs. Raquel Sáenz Valiente, asked Mery Lenon to take chargeRead More 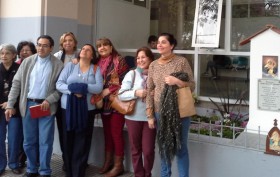 Argentina, Tucumán, by Silvia Sibay • Almost ten years ago, on September 8, 2005, three Schoenstatt Father novices made one of the legacies of their stay at Tucumán a reality: the construction and the blessing of a Wayside Shrine of our beloved Blessed Mother at Padilla Hospital, the place where they were carrying out their social work practicum. The pioneers: Joaquín, Claudio, and Manu sowed the seed. Today two of them are Schoenstatt Fathers: Fr. Claudio Martínez Felmer (Chile) and Fr. Manuel López Naón (Argentina). When they had to leave,Read More