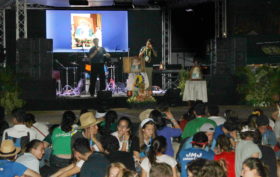 WYD2019 PANAMA, Maria Fischer • Does someone speak Spanish? Yessssss! Of course. Portuguese? Yessss! English? Yesss! Does someone speak Italian? “Yessssss!” shouted Pamela Fabiano the only Schoenstatt representative from Italy along with the Brazilians and Germans close by her that also shouted. On the night of January 23rd, the day of Pope Francis’ arrival in Panama, hundreds of Schoenstatt young people, parish neighbors, and many other people were in the square beside San Francisco de la Caleta parish for the Schoenstatt Marian Festival at WYD, to share their love forRead More 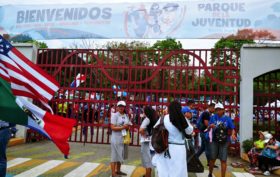 All of Panama is celebrating

WYD2019 PANAMA, Maria Fischer Upon landing and arriving in Panama from San Jose, Costa Rica, a gigantic poster up in the airport read: “Pope Francis, all of Panama joyfully welcomes you.”  WYD is felt, heard, and experienced in this small Central American country filling up with pilgrims from throughout the world to celebrate this encounter of God’s young people with the Pope. — Indeed WYD was already being felt at the San Jose airport – with a large group from Guatemala, others from Canada, Colombia, Brazil, and Germany. While theyRead More