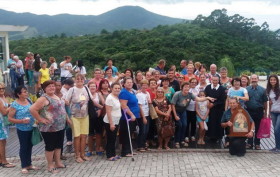 BRAZIL, Sr. Rosequiel Fávero and the schoenstatt.org team • Since June of last year, the Schoenstatt Family in Brazil began to see an “old dream” coming true: the Schoenstatt Shrine at Santa Catarina! God showed through the donation of land and a house at Biguacu in Florianópolis, where he wanted the Shrine of the Mother and Queen of whom so many in this state love. Since then, work groups have been created and the Schoenstatt Family throughout the state has been working materially and spiritually for the construction of theirRead More 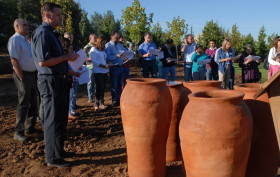 CHILE, Schoenstatt Pastoral Tierra Escogida Shrine of Talca by María Magdalena Prieto • After twenty-four years, Talca’s Schoenstatt Family will have our Mother and Queen’s Shrine.She will establish herself in this “Tierra Escogida.” This shrine will be consecrated on Saturday, 19 March 2016, and Diocesan Bishop, the Most Reverend Horacio Valenzuela Abarca’s will be present. Tierra Escogida Schoenstatt Shrine is located in Talca, capital of the Maule Region in central Chile, a place eminently suited for agriculture and forestry; it is famous for its excellent fruit production, vineyards and wines.Read More