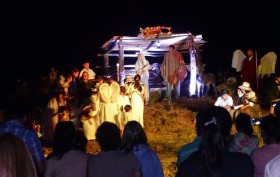 ARGENTINA, Fr. Alan Sosa • The Schoenstatt Family from San Luis is in the process of conquering their future Shrine. There is already a large wayside shrine, and it was the goal for youths’ walk in November. The grounds are already part of the family’s awareness.   On Monday, 7 December, a live manger pageant with traditional figures and music was held on the grounds. On 6 January, the kings arrived on horseback. Since the bishop decided that the grounds for the future Shrine be a place for the MarianRead More 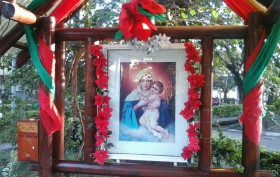 ARGENTINA, by Mima Cardona and Maria Fischer • As is customary a few days before Christmas, a Holy Mass was celebrated, and there was a “live manger” scene at Chaco’s Resistencia Hospital in preparation for Christmas. A detail: the baby girl, as the baby Jesus, is the Blessed Mother’s miracle through the prayers offered for her by all the Movement’s missionaries when she was seriously ill at the pediatric hospital… Original: Spanish. Translation: Celina M. Garza, San Antonio, TX USA. Edited by: Melissa Peña-Janknegt, Elgin, TX USARead More