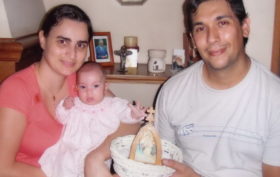 What did the Blessed Mother do to stay in their home?

ARGENTINA, Martha Liotti • It all began on 13 January 2010, when Florencia Yasmín was born, at twenty-eight weeks, weighing 1.350 grams, and she was placed in an incubator. That same day, she received a visit from the Schoenstatt Pilgrim Mother in the modality of at-risk babies and children, and her parents consecrated to her Immaculate Heart. Two months of silent waiting went by marked by days and nights of farewells, which were always painful. Florencia grew healthy with no difficulties, and finally she was released weighing 2,300 grams. AtRead More