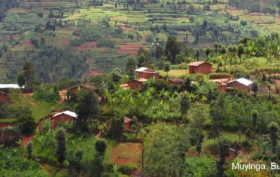 BURUNDI, Diomede Mujojoma • The Lenten Action Commission from the Mount Sion Gikungu Shrine in Burundi visited Muyinga prison on 23 July 2017. They took along donations of clothes, 350kg of rice, 65l of palm oil, 140kg of maize meal, 35kg of sugar, 50kg of salt, 72 tubes of toothpaste, bread, ham and Fanta to give to the prisoners. The delegation headed by Félix Naishakiye, the vice president of Lenten Action Commission, left Bujumbura in two vehicles at 7.30 in the morning. They were late in arriving because they didRead More