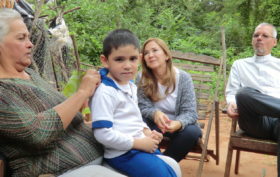 Posted On 11.08.2016In Mother of Tuparenda House, Projects, works of mercy

I am society… challenged to act

PARAGUAY, by Susana Stanley • The phone rang.  My sister-in-law told me that my nephew had been assaulted two blocks from his house!  I asked the usual questions:  Is he okay? Was he hurt?  He was not hurt, and then she told me about the assault.  Two boys, one about age 12 and the other 17 stopped him, and at gunpoint, they demanded his cell phone and wallet.  He gave these to them and ran home where he called his mother.  They went to the police station to report theRead More

Posted On 27.02.2016In Mother of Tuparenda House, Projects, works of mercy

Casa Madre de Tupãrenda: Sorrow that turned into a dream… is becoming a reality

PARAGUAY, Fr. Pedro Kühlcke • – Hello, Pepito! Are you in jail again? Too bad! Why? –Yes, Fr. forgive me! I was out for four months. However, I did not find work anywhere, I did not have support from anyone; you know my family chaos. Temptation was stronger, and I failed again. The sorrow: A short time after his release, he is in jail again Almost two years ago when we became aware that the Blessed Mother wanted to send us to such an existential periphery like a jail forRead More
12