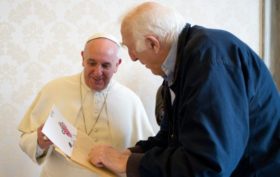 FRANCE, via www.aica.org • The funeral of Jean Vanier, the founder of L’Arche who died on May 7, was held in the small community of Trosly-Breuil, north of Paris on the afternoon of Thursday, 16 May. The mass, celebrated with great simplicity, was presided over by the Archbishop of Rennes, Pierre d’Ornellas. — The Pope encouraged the L’Arche communities to continue in the footsteps of Jean Vanier. Pope Francis sent a message in which he encouraged the L’Arche communities to “continue to be places of celebration and forgiveness, compassion andRead More 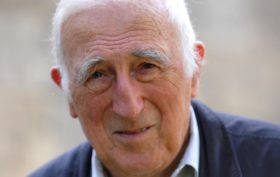 FRANCE, Editors of schoenstatt.org, with material from AICA • In the early hours of 7 May 2019, the Canadian philosopher and theologian, Jean Vanier, founder of the L’Arche communities that serve people with disabilities and their families, died at the age of 90. — On his flight to Macedonia Pope Francis was informed about the death of Jean Vanier and prayed for him and the entire L’Arche community. After meeting Jean Vanier in March 2014, the Pope described him as “a man who smiles and encounters others”. Active and enthusiasticRead More