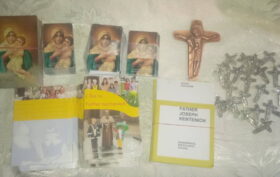 UGANDA, Maria Fischer with Jean de Dieu Ntisumbwa • It is 70 km from Nakivale parish in the largest African refugee camp, where Burundian refugee Jean de Dieu Ntisumbwa, lives, to the post office in Mbarara and the post box of the Catholic parish of Mbarara, which he can use to receive parcels. Due to corona, there is no taxi and no public transportation system. But Jean de Dieu urgently wanted to go to Mbarara to pick up the parcel that had arrived from Schoenstatt… — So, he took hisRead More 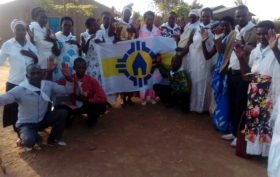 UGANDA, Jean de Dieu Ntisumbwa/Maria Fischer • What do we expect of a French-speaking Burundian Schoenstatt member obliged to flee to Uganda, an English-speaking country, to do there? Found Schoenstatt, what else? Jean de Dieu Ntisumbwa, a refugee from Burundi since 2015, works in the Nakivale parish, archdiocese of Mbarara, where Schoenstatt began on October 30, 2016. Meanwhile, there are seventy active members. The only problem: no MTA pictures, no Unity Crosses, no Schoenstatt books in English.— The Nakivale parish gathers a multi-national group of people that have taken refugeRead More