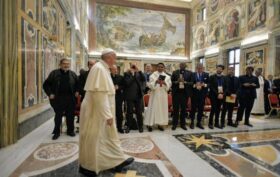 VATICAN/PARAGUAY, Maria Fischer • They had met before, and at that time it also had to do with serving young prisoners. It was in July 2015 on the banks of the river at Asuncion when Fr Pedro stood on a podium with Pope Francis and a young prisoner from the Youth Prison in Itaugua. Now Pope Francis and Fr Pedro Kühlcke have met again in the Vatican at the close of the International Congress on “Integral Human Development and the Catholic Prison Pastorate” for regional and national leaders of theRead More