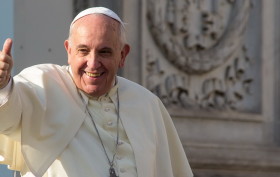 Posted On 16.06.2015In Church - Francis - Movements, Francis - Initiatives and Gestures

Francis to open a homeless domitory near the Vatican

By Editorial Team • The website, ANSA, reported that Pope Francis will open a homeless shelter near the Vatican. The structure, which will provide 30 beds, was located after searches and inspections at the intersection of Via dei Penintenzieri and Borgo Santo Spirito. The renovation is still in progress at the site. Over the past months, Pope Francis has had public showers installed and a barbershop set up at the Vatican for the homeless. At the showers, every “homeless pilgrim” received a package with a towel, underwear, soap, deodorant, toothpaste,Read More 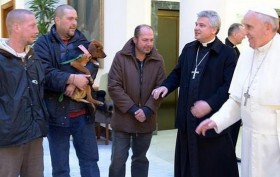 “A way to prepare for the Pope’s visit: his poor arrive before him”

Pope Francis has invited a group of homeless people from Rome to go to Turin to pray before the Holy Shroud, which will be on exhibit in the city until June 24, the Vatican newspaper, “L’Osservatore Romano” confirmed. Pope Francis wanted to offer these pilgrims, without resources, the opportunity to participate in this event.He financed the trip for two buses for those who often live and sleep beneath the columns of Saint Peter’s Square and its surroundings. He did it through the management of the Vatican almoner, Konrad Krajewski, whoRead More
12