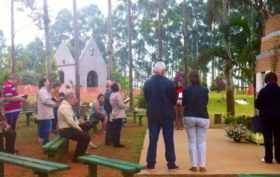 BRASIL, Melissa Rossatti • Bags of cement, shovels, sand, bricks and many rosaries… Early in the morning, that was the scenario for those passing by the grounds of the future Schoenstatt Shrine in Caieiras, in Brazil’s state of Sao Paulo. During the last month, the Caieiras Schoenstatt Movement gathered every morning to offer the rosary as a family. The initiative was called “Heroic May” and the presence of the Family members at an early hour was guaranteed with loyalty and much prayer: 31 days of prayer and devotion in whichRead More 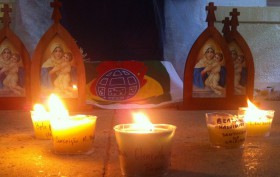 May this mission bear much fruit in the city of Ibiúna

BRAZIL, Boys’ Youth of the Southern Region • Generation Missionary, Everything for the Queen! Guided by this motto and regionally divided into three groups: South, Southeast, and Parana, the Schoenstatt Boy’s Youth of Brazil carried out the 2016 Christ Tabor mission. Here is a report of the 2016 Christ Tabor Mission in Ibiúana, Sao Paulo: The city of Ibiúna/SP received a very special visit on 16-23 January. Following the year’s theme: Missionary Generation, all for the Queen, forty-four missionaries, with joy and the zeal characteristic of those whose hearts areRead More