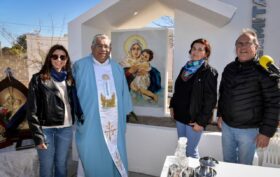 A new wayside shrine in Hernando

ARGENTINA, Claudia Echenique / María Fischer • On the afternoon of Monday, August 15th at 3:00 p.m., the Mass and inauguration of the wayside shrine of the Blessed Mother of Schoenstatt took place in Barrio Alberdi (at the crossways of Entre Rios and Soldado Giraudo) in the city of Hernando, Province of Cordoba. The wayside shrine has a beautiful mosaic of the Mother Thrice Admirable of Schoenstatt, made by local artists. — The mayor of Hernando, Gustavo Bottasso, other officials, members of the Schoenstatt Movement and of St. Joseph’s Parish,Read More