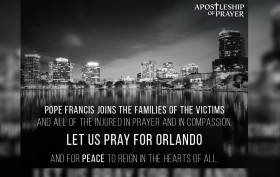 Pope’s pain and horror over the Orlando massacre

MASACRE IN ORLANDO – COVENANT SOLIDARITY • “The terrible massacre that has taken place in Orlando, with its dreadfully high number of innocent victims, has caused in Pope Francis, and in all of us, the deepest feelings of horror and condemnation, of pain and turmoil before this new manifestation of homicidal folly and senseless hatred,” was the statement of the Holy See Press Office Director, Fr. Federico Lombardi SJ, released on 12 June, following the attack on a nightclub in Orlando in the United States, in which 53 people diedRead More