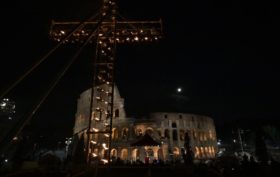 Lord Jesus, help us to see in your Cross all the crosses of the world

POPE FRANCIS, editorial team • At the end of the Stations of the Cross at the Roman Coliseum on Good Friday, Pope Francis said a heartfelt prayer in which he asked the Lord to help us to see his cross in all of the world’s crosses. — It is an invitation into reality, into the concrete, to connect the news found in the newspapers with what is also experienced around the cross of Christ, to put names and images into each line of this prayer, which emerges from faith andRead More 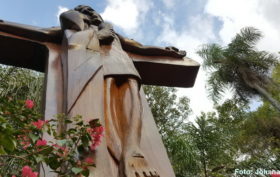 O Christ, abandoned and betrayed even by your own…

FRANCIS IN ROME • At the end of the Stations of the Cross on Good Friday at the Colosseum in Rome, where the first Christians were martyred, Pope Francis turned to the people who were present and prayed a long and heartfelt prayer of reparation for the sins that humanity and the even the Church have committed against Jesus on the cross. Complete text of Pope Francis’ prayer: O Christ! Abandoned and betrayed even by your own and sold for next to nothing. O Christ! Judged by sinners, handed overRead More