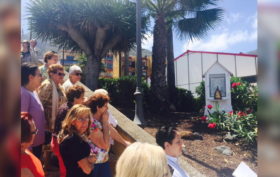 Posted On 11.08.2016In Campaign, Connecting Schoenstatters

TENERIFE/AUSTRIA, María Dolores Fernández Lapuente • María Dolores Fernández Lapuente is an Argentinean physician, currently living in Austria, who previously lived in Tenerife, Spain, where at that time, a wayside shrine of our Mother Thrice Admirable of Schoenstatt was blessed.  The name of the shrine is “Desciende María” [“Mary, descend”] located in Bajamar and found on the shrines and wayside shrines’ map. In addition to the wayside shrine, the Pilgrim Mother is also already traveling in Tenerife. The first Tenerife Pilgrim Mother on pilgrimage Dolores relates:  The first Pilgrim MotherRead More