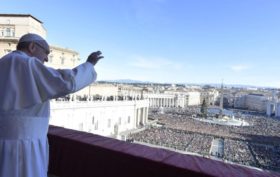 Christmas – a message of fraternity

POPE FRANCIS – CHRISTMAS MESSAGE 2018 • Sitting around the table at the jewellery workshop of the Brothers of Mary in Schoenstatt in the afternoon on Christmas Day, a Paraguyan, a German who lived in Chile for nearly 25 years, an English woman who was born in India, and a half-Latina German woman, we spoke about how to translate “fraternity.” Or rather, we were talking about Pope Francis’ message and about inculturation, internationality, internationalization (of the Schoenstatt communities, the place of origin) and the international mission of schoenstatt.org and itsRead More 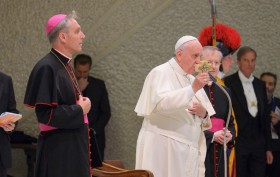 VATICAN, VIS/M. Fischer • Contemplation, service, fraternity – three aspects of priestly life that Pope Francis proposed to the participants in the general chapter of the Schoenstatt Fathers. The new Superior General, Fr. Juan Pablo Catoggio – whom the Holy Fathers knows personally and very well from Buenos Aires – along with the members of the General Chapter were received in audience by the Holy Father, Pope Francis on Thursday 3 September. At the end of the meeting the Pope gave three recommendations to the Schoenstatt priests. “Firstly, accompany andRead More