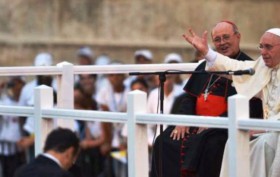 Dream that with you the world can be different. Dream that if you give your best, you are going to help make this world a different place

POPE FRANCIS IN CUBA – MISSIONARY OF MERCY • The Pope left the cathedral in Havana and went to the Félix Varela Cultural Centre, where thousands of young people were waiting for him under a heavy rain. Catholics, members of other faiths, non-believers….and Francis once again improvised, this time around two concepts: dreams and hope. Complete text of Pope Francis at the Félix Varela Cultural Centre You are standing up and I am sitting. How rude! But you know why I am sitting; it is because I was taking notesRead More 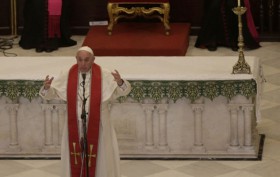 FRANCIS IN CUBA – MISSIONARY OF MERCY • On the second day of his visit to Cuba, Pope Francis improvised an address to the bishops and the religious, calling for “poverty and mercy.” Taking up the theme of the sermon in the Mass, from disinterested service instead of service of the other and also of one’s own misery, he emphasized the service that many missionaries had carried out in the Caribbean island. He thanked them for this service, particularly toward the little ones, the neediest. “There are pastoral services whichRead More