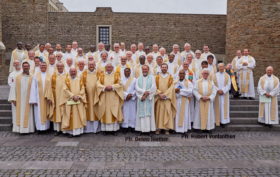 New leadership for the International Federation of Priests

SCHOENSTATT COMMUNITIES, schoenstatt.org editorial staff • On Thursday, 22 August 2019, the feast of the Queenship of Mary, the International Schoenstatt Federation of Priests chose new leadership when Father Alejandro Blanco (La Plata/Argentina) was elected General Secretary. Other members of the International Secretariat are Father Hubert Vonlanthen (Switzerland) and Father Benno Riether (Germany). — Rector Egon M. Zillekens, who had represented the Community in the General Presidency for ten years, did not stand for election. For some years now, the Federation of Priests’ international leadership has been deliberately called theRead More