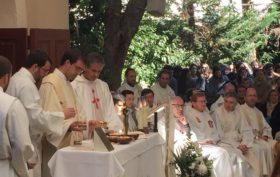 Free and brave, faithful witnesses to serve others

SPAIN, Juan Zaforas and Maria Fischer “We could stay in these common places, our clichés, but they do not touch the essence of our priesthood.  When do they become real?  When do they enter the hearts of those called?  When do they really enter your heart?” asked Fr. José María García in the homily during Fr. Eduardo Segura Bueno’s first Mass, on 4 November 2018, in Madrid’s Schoenstatt Shrine.  He was encouraging him and all to be “free and brave, faithful witnesses to serve others.” — The day after Fr.Read More 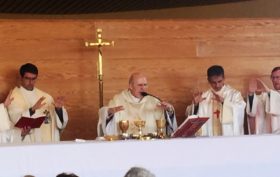 Fr. Eduardo’s ordination to the priesthood: walking with everyone

SPAIN, Juan Zaforas • On 3 November 2018, a young man was ordained as a priest in Pozuelo Schoenstatt Shrine. I have known this young man since he was a boy because he was my son’s friend son who we always called Edu and is now Fr. Eduardo. —   Cardinal D. Carlos Osoro ordained him, and in his very personal homily, he made him see what is now expected of him, to be transparent in Jesus Christ for all men/women, and he insisted on the all without looking atRead More