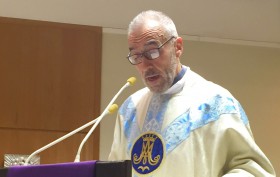 30 years of Fr. José María García’s Priesthood – Celebration at the Shrine of Madrid

SPAIN, Miguel Lasso de la Vega • On Monday, 7 December, a Mass was celebrated in Madrid’s Serrano Shrine for Fr. José María García’s 30 years of priesthood. Memories and expressions of gratitude were shared. Thirty years at the service of the Schoenstatt Family and the Church, thirty years since Fr. José María García Sepúlveda gave his yes to be Christ’s shepherd, placing himself unconditionally in Mary’s hands to be a loyal and faithful instrument. This is what was celebrated with him on Monday, 7 December, at Serrano Shrine, withRead More 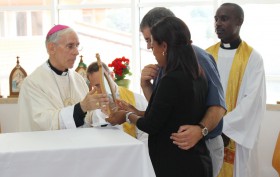 “It is not ‘Belmonte’; it is ‘Bellisimo Monte!`” National Encounter of the Schoenstatt Movement in Italy

ITALY, Belmonte, Rome, María Fischer • “It is not ‘Belmonte’, it is ‘Bellissimo Monte'”, Fr. João José from Angola said smiling. He learned about Schoenstatt when he studied German at the Kreuzberg Institute in Bonn and when he returned to Rome – where he studied Church history at the request of his bishop – he contacted Belmonte to offer his priestly service and become more attached with Schoenstatt in Rome. On September 6, he participated in the national encounter of the Schoenstatt Movement in Italy at Belmonte. Like every year,Read More