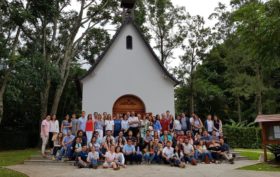 “Times like this one are extremely enriching.” Retreat for Costa Rican engaged couples

COSTA RICA, José Alejandro Martínez and Anelena Hueda • The second Retreat for Engaged Couples was held Sunday, 21 October, at the Family of Hope Shrine in San José, Costa Rica. In spite of being in the midst of the rainy season, Divine Providence gave us a splendidly sunny day, providing thirty-three young engaged couples the opportunity to attend Sunday Mass as well as participating in Fr. José Luis Correa’s jointly organized talks. He is the Schoenstatt Movement Adviser in Costa Rica, and for couples that belong to the EngagedRead More