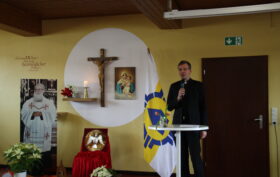 GERMANY, Sr. M. Louise Schulz via schoenstatt.de • In January 1967, the founder, Fr. Joseph Kentenich (1885-1968), visited the Schoenstatt Family from Fulda and gave them important impulses. Today, the Schoenstatt diocese of Fulda also meets each January for mutual exchange and common orientation, this time with Bishop Dr. Michael Gerber. The communities of the Schoenstatt Movement presented their current projects – which was not only informative for Bishop Gerber, but also for the many Schoenstatters in the hall itself. —  “Dietershausen – a Schoenstatt Center with vitality!” “Dietershausen –Read More 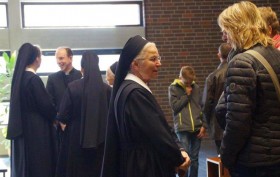 GERMANY, Sabine Merdes and María Fischer • “Dietershausen is facing its most sorrowful time since many decades – this coming Sunday the first Sisters of Mary will be leaving and the whole village is shocked. … Now it is certain and you can read it in the local newspapers…” That was the initial reaction at the beginning of October when the news reached the media and the Schoenstatt Family in the diocese of Fulda. As a result of combining provinces, the current provincial centre of the Schoenstatt Sisters of MaryRead More