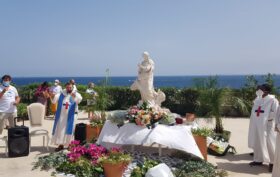 SPAIN, Maria Fischer • “In this difficult moment, Mother of Mercy, “Madre, Ven” [Come, Mother in Spanish]. The image of Our Lady of Ephesus arrived from Ephesus (Turkey) in Valencia to visit the sick, elderly, prisoners, and religious communities. — Thus reads the note from Ainhoa Clavel from COPE in Valencia. A Pilgrim Mother has been traveling through Spain since May and people come from their homes to greet her, give her flowers, offer her rosaries, hymns, and prayers. A phenomenon in a country that has a high number ofRead More 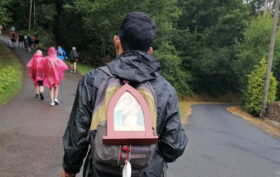 SPAIN, Luis Ortiz/mf • Luis is a Venezuelan citizen who had to flee, but he found a Pilgrim Mother image at the refugee accommodation where he was staying and became her missionary by taking her to people on the street, to refugees … On 11 July, he fulfilled his dream of reaching Spain and doing the Camino of Santiago de Compostela. He relates his encounters with other pilgrims … And with the Pilgrim Mother who goes through the streets of Spain with the slogan: “Come Mother”. Only now that heRead More