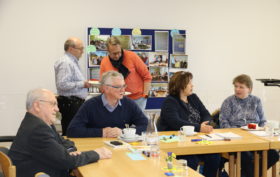 “Around the Table” – Leaders and Business People for Ten Years

GERMANY/SWITZERLAND, Maria Fischer • It was almost at the end that the words were spoken that describe these ten years of IKAF, and at the same time the next year’s programme and challenge: Around the Table. With these words Fr Kentenich described his concept of communication. “Around the Table” – that is the new name for the biennial meeting of leaders and business people prepared by the International Kentenich Academy for Leaders (IKAF). — Around the table: Fr Kentenich developed this concept already in the founding period and applied itRead More 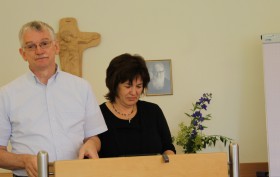 GERMANY, Maria Fischer • “Caught!” was clearly written in Margit R’s face when Gertrud and Norbert Jehle spoke very practically and graphically about “listening and looking” on Saturday, 27 June, during the Jour Fixe for leaders at Memholz, Germany. These are decisive elements of observation when dealing with colleagues. The little, practical exercise during which Margit R’s face showed she had been caught, gave rise in other participants to a whole palette of emotions from “This can’t be happening!” to a smiling, “It really is my turn!” The exercise consistedRead More