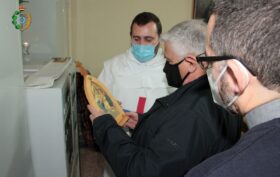 SPAIN, Portal of the Diocese of Cadiz and Ceuta • Since the beginning of the pandemic, a Schoenstatt Pilgrim Mother, “Mother Thrice Admirable,” known as the “Mater,” has been living under the same roof as more than 1,200 prisoners in the Detention Center of Botafuegos, Algeciras. — The Pilgrim Mother accompanies all the religious celebrations and catechesis that take place in the prison chapel. During this time, Our Lady has accompanied the liturgies in many departments, and a large number of prisoners have even received her in their cells toRead More