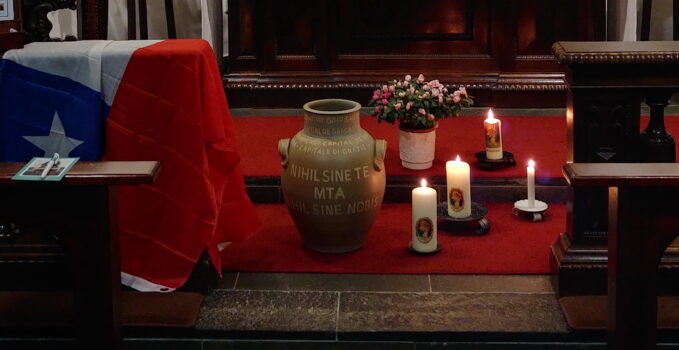 I simply turned off towards Frankfurt on the motorway instead of Cologne one day on the way from work. It is February 18th, Covenant Day, and my cell phone has loaded so many people and intentions that it urgently needs to go to the Original Shrine. This spontaneous pilgrimage to the Original Shrine brings two surprises: The blessing with the Blessed Sacrament at 6:00 p.m. at the end of the Adoration and a new, large jug with the inscription “Capital of Grace” in many languages.— 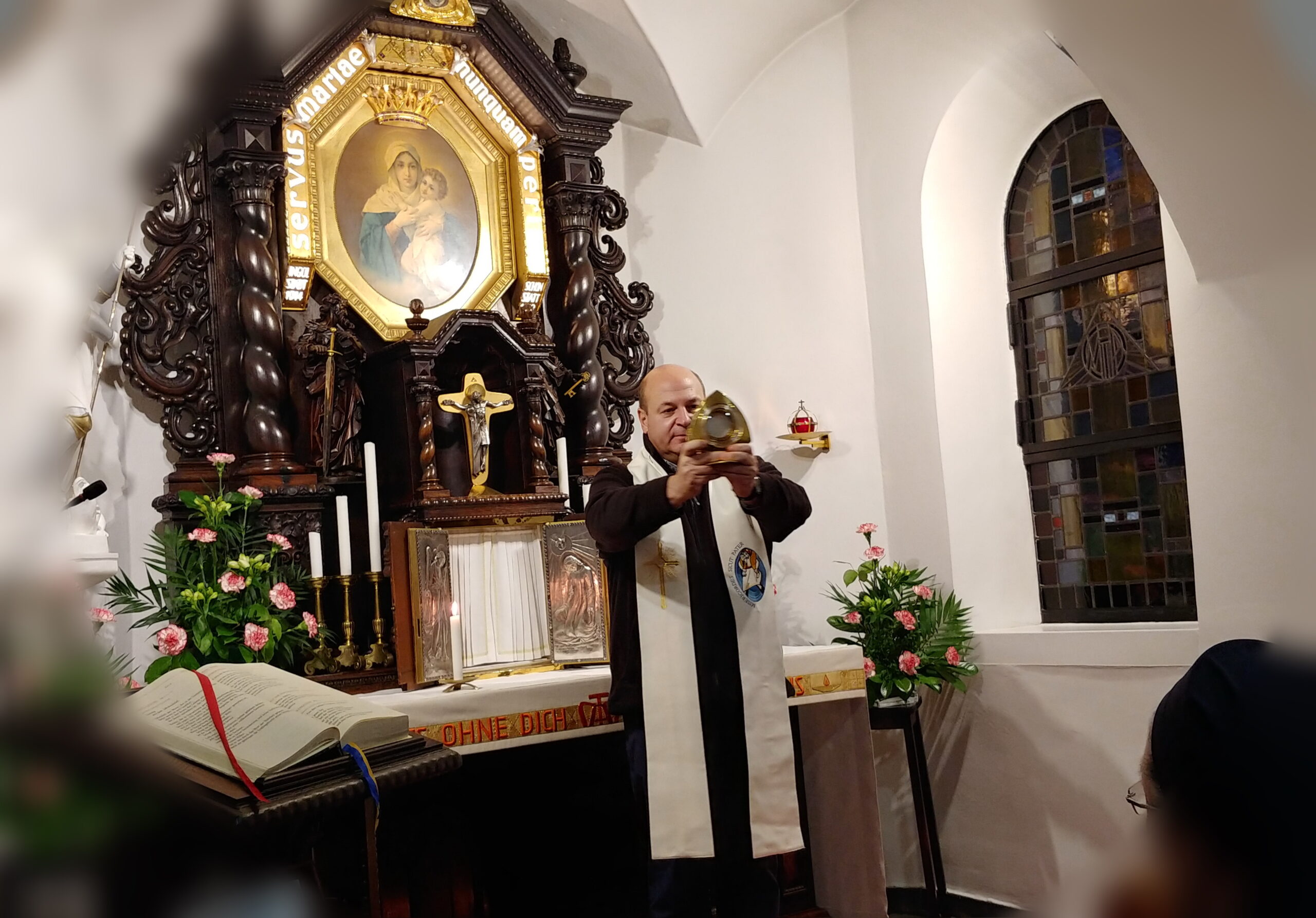 Many years ago the jug was created in Austria as a symbol for the life process Capital of Grace. Already the process “Capital of Grace” is pictorial and was consciously chosen by Father Kentenich from the economic life and is one of the “essentials” of Schoenstatt: unlike other places of pilgrimage and grace, in every Schoenstatt Shrine – from the Original Shrine to the Heart Shrine – the personal, creative, active and decisive participation is undisputed. “Deposit”, so to speak, into the account of the MTA, so that she can then distribute with full hands. To others. To everyone. Or to the one who, at this very moment, needs all the available capital of grace. The theology behind this is well-founded and orthodox, the image of the capital of grace is understandable to everyone who deals with bank accounts, credit cards and money transfers. So everyone.

Such a pictorial expression is not yet enough for sensory people, and so, from the box with slips of paper to colourful “Capitalarios” in South America and woven baskets in Burundi to the jug inspired by the gospel of the marriage at Cana, images were created again and again for this process of active participation, in which nothing is too small and nothing too large to give and to call upon the entire concentrated power of the Capital of Grace for it. 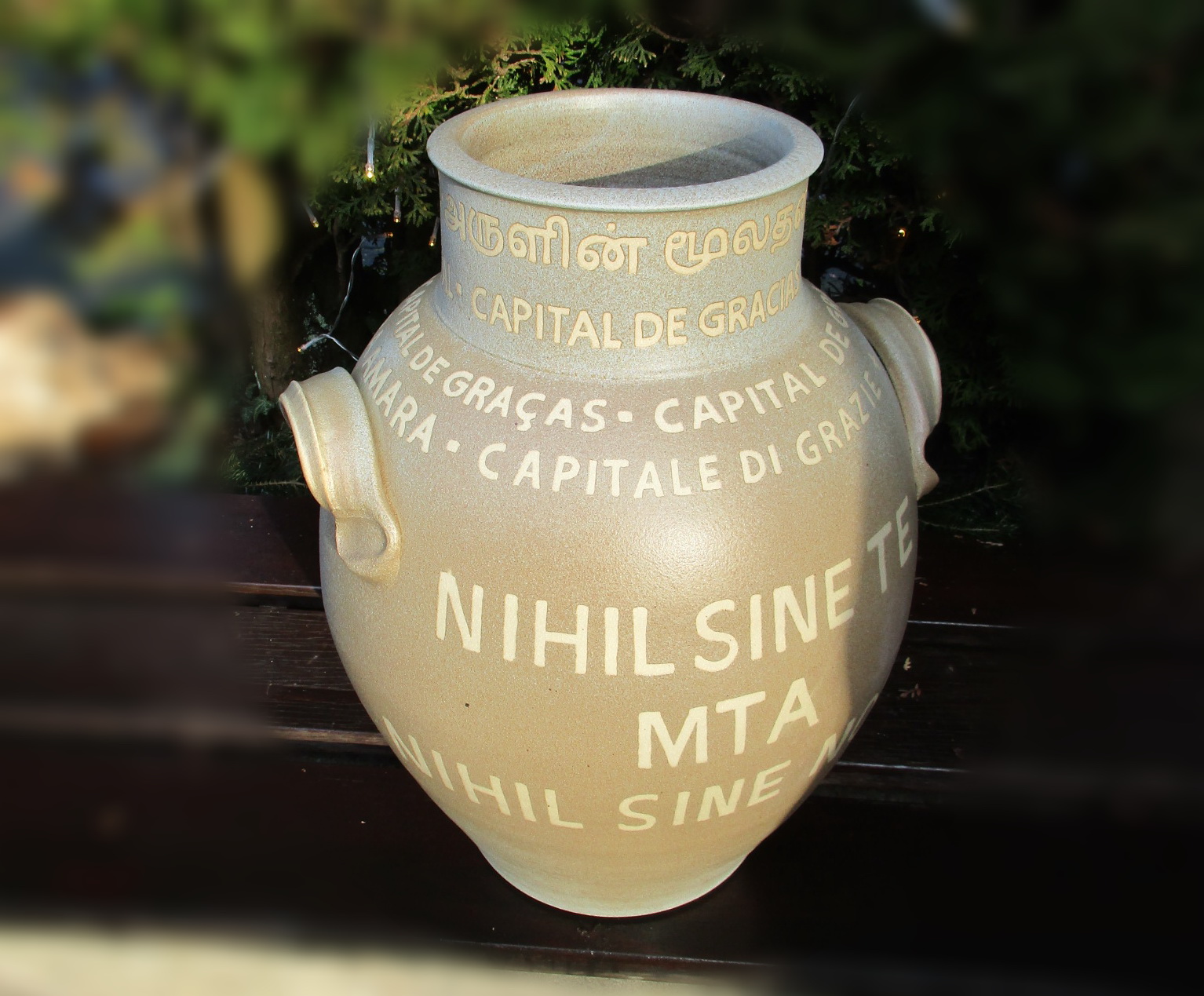 The new jug. It says on it in eleven languages: Capital of Grace. Photo: Weweler

Now, at the front of the altar of the Original Shrine, there is this beautiful new jug with an inscription in several languages: Capital of Grace.

From the Christmas greeting from the Rector of the Original Shrine, Father Pablo Pol, which was also distributed on schoenstatt.org, it was already known that the previous jug was broken:

“Something very special happened a few weeks ago. The jug that contains the letters, petitions, offerings, in short, the entire Capital of Grace of the Original Shrine, was broken. As you can see in the photos, the letters that arrived with petitions to the Blessed Mother from all over the world were placed with great enthusiasm and the jug could not withstand it…it simply broke.”

Short question to Father Pablo Pol and the answer:

“We had the new jug for the Capital of Grace made because the previous one was broken. The new one was made in Hilgert and the idea was to write the word ‘Capital of Grace’ on it in several languages to emphasize its internationality.” 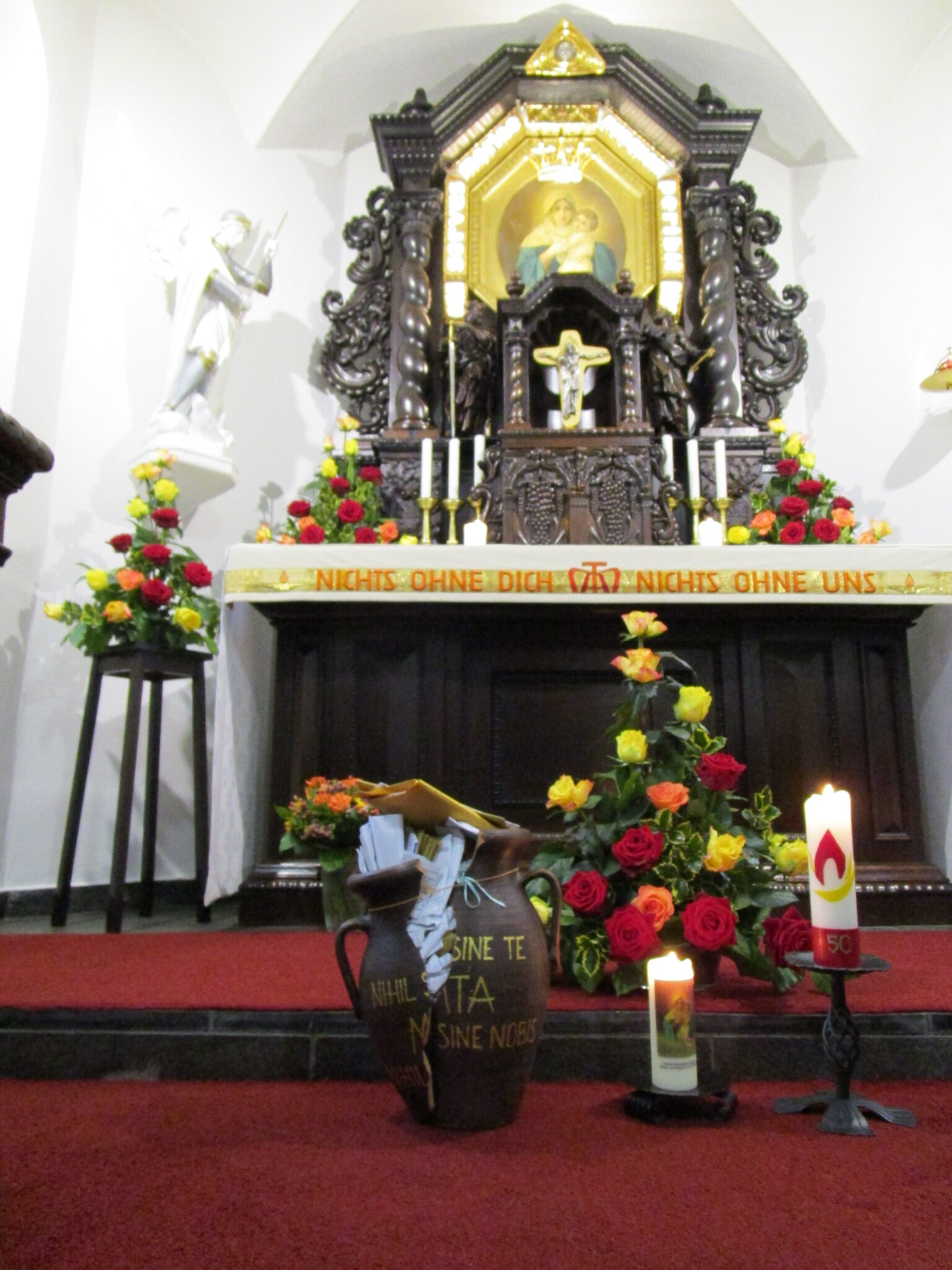 Bernadette and Norbert Weweler, the sacristans of the Original Shrine, reported:

“Yes, with the jug, that was quite a story. The “long-standing jug” had already been broken and glued again, so a Polish group of pilgrims had once donated a new, relatively light and thin-walled jug. However, the jug had fallen over and got a slight crack. But first of all it still held…

Then one evening a group of young people from Paraguay came. They had their own time in the Original Shrine after the evening blessing. And they had collected a great deal of Capital of Grace, and they had brought it in bundles. Yes, they had played beautiful music and each group came forward individually and placed their bundle of Capital of Grace in the jug. Finally the last participant came forward and put her bundle in the jug, which was already well filled with Capital of Grace. Then something was added, everything was to be put into the jug. The music was just coming to an end… – when the jug burst in half with a powerful audible “bang”. Completely surprised, the giver of the Capital of Grace looked into the camera… -A beautiful picture – the pitcher overflowed and could no longer contain the amount of Capital of Grace… -The group was of course devastated at first, wanted to confess what had happened the next morning. -But Sr. Vanda from the sacristy team immediately recognized the beautiful picture: “The jug could not contain the amount of Capital of Grace…!

This message then went out into the world with Father Pablo Pol’s Christmas greeting:

…I would like to invite you to let us share the sign for a few moments: That the Capital of Grace is overflowing in the Shrine! What a great joy for the Blessed Mother that her children throughout the world take seriously the request of the Founding Document: “Bring me diligently contributions to the Capital of Grace? (18.10.1914) 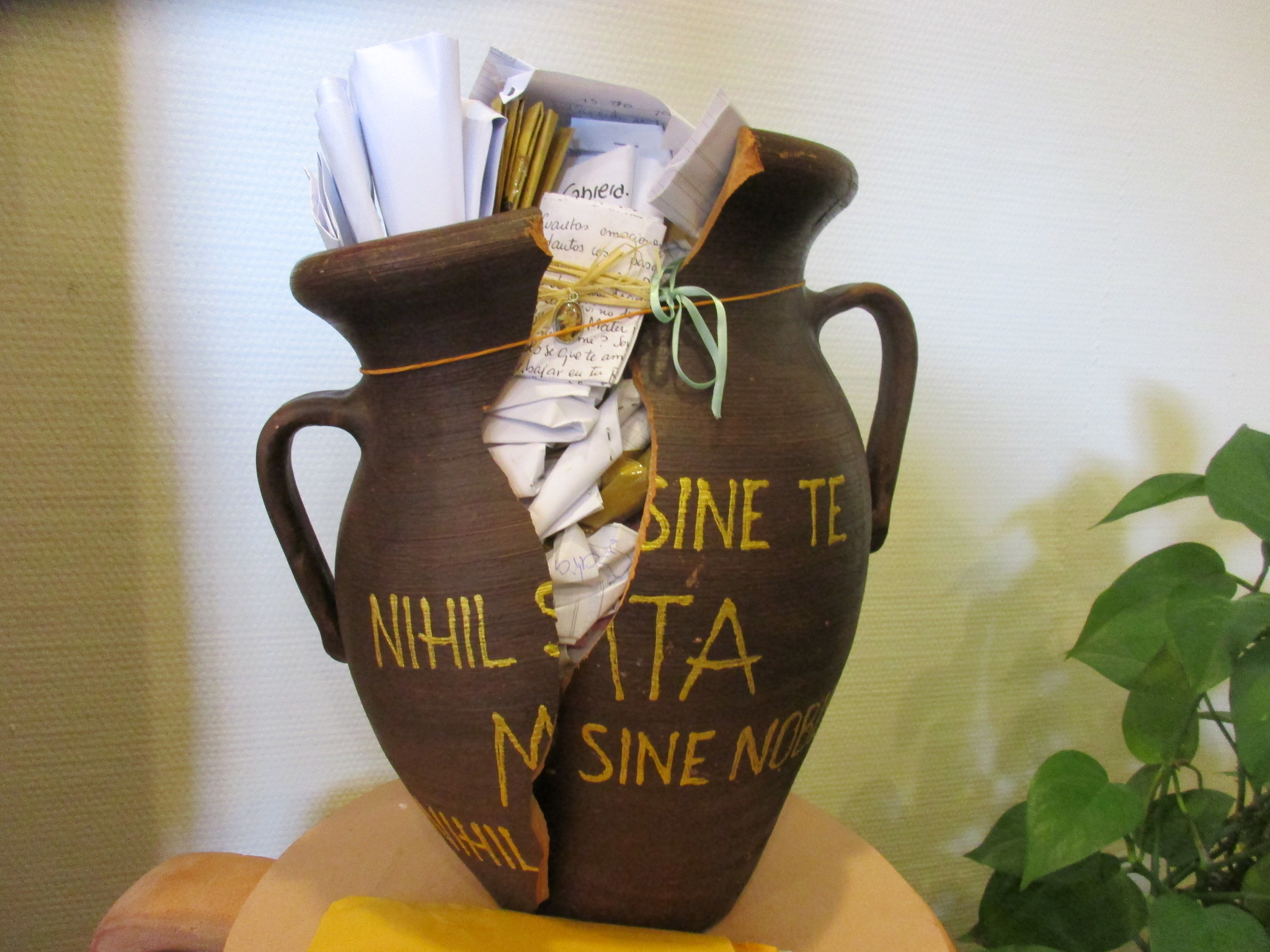 A new jug is created

So a new jug is needed.

“So we went in search of a new jug on behalf of the principal. We had quite precise ideas: stable, durable, as bright as possible, the handles tight but still firm, at least 50 cm high, a large opening so that one can reach in comfortably.

Then our Rector, Father Pablo Pol, had the additional idea to have the well-known inscription “Nothing without you, nothing without us” made in Latin on the front and back, and also to write the word “Capital of Grace” on the upper rim, in several languages – Spanish, Portuguese, English, Italian, German, Tamil… 11 languages in total!

We had to realize that finding a manufacturer was already the first challenge. Obviously, there is little training in the field, the people who can do it are currently retiring… And this, even where the old pottery town Hoehr-Grenzhausen is in the immediate vicinity!

When we had found a manufacturer and told them what we wanted, they would say: “That won’t work, you can’t engrave it properly… it’s no longer legible…” or: “At most you could stick it on somehow – but with a rounding… – it won’t hold, it won’t look right…” – That was the time when we first went into worship at a loss…

The next day the accountant at the father’s house heard about the search.  And she could refer her sister and her husband, who have an independent business in Hilgert. Father Pablo Pol then called there and went there directly, and so did we.

Yes, they said it could be done. My husband is a master potter or ceramics master and I am a trained ceramics painter,” said Mrs Hastenteufel. “But with these 11 writings on the edge… – I don’t think it will work, not even with all that love.”

She explained the effort involved in such work: a very large vessel, for the production of which 13 kilograms of clay are moved and worked, pre-firing, after-firing, then the writing. Many individual steps.

Quality has a price, and the Blessed Mother in the Original Shrine and her pilgrims deserve quality. Father Pablo immediately showed his appreciation and explained that a custom-made jug in this price range was also desired. 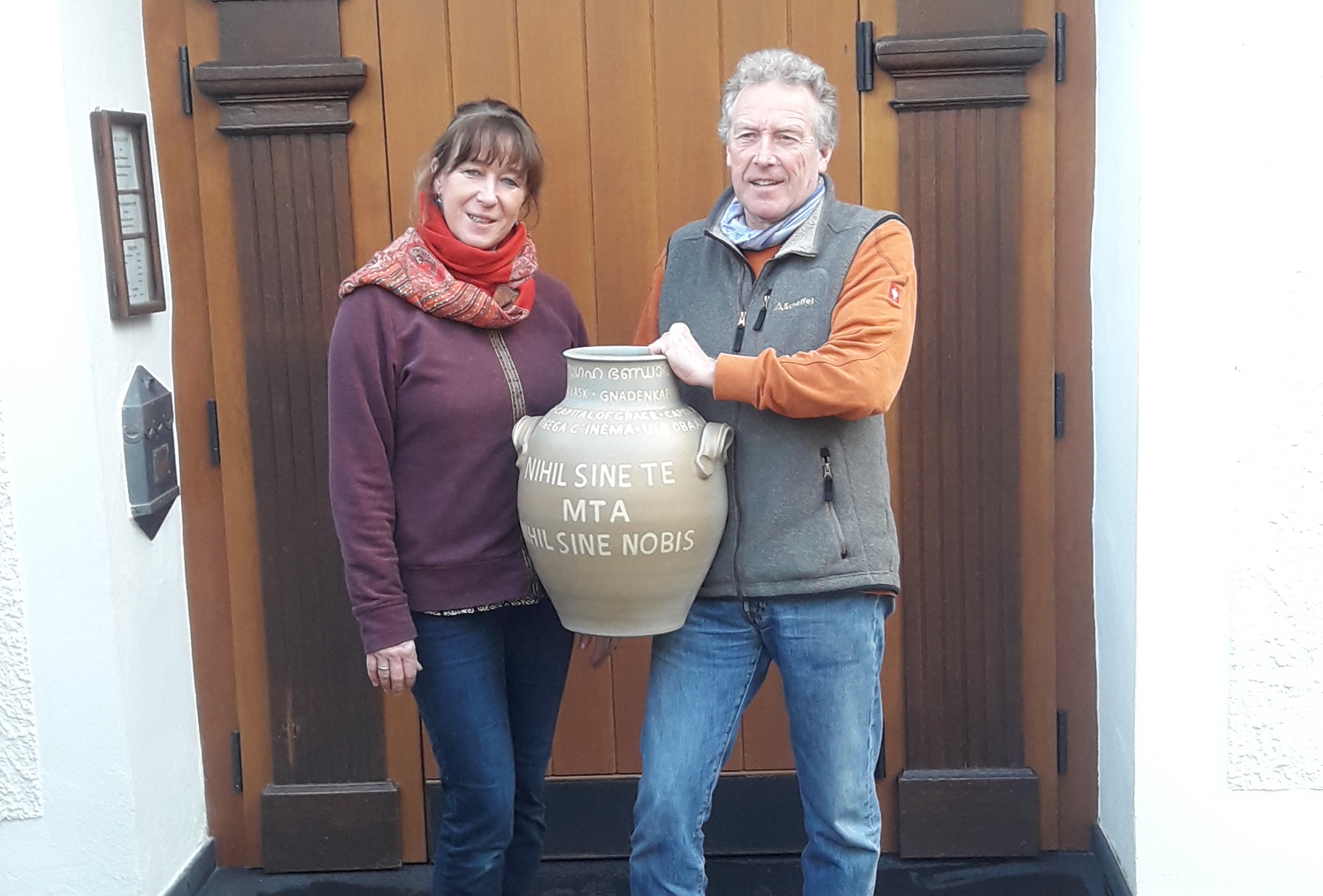 Mr. and Mrs. Hastenteufel with the new jug. Photo: Weweler

Internationality is fired in with the jug

A marginal note, but moving: Mr. and Mrs. Hastenteufel have already provided development aid for clay and ceramics in various countries, including Rwanda.

“I probably won’t be able to manage more than six languages,” was the message when the work was already underway. “Please choose which ones you would like to see.” But we ask the Blessed Mother for help, and perhaps you will be able to get more writing on it,” Bernadette and Norbert Weweler said.

“And indeed: The married couple Arno and Ute Hastenteufel brought the finished jug personally. You could see that they were excited about their masterpiece themselves. And now we have all 11 languages on the rim! Even Tamil is on it!” And so they proclaimed with joy.”

And now he is in the Original Shrine. And waiting to be filled until it overflows.

And perhaps… yes, perhaps on the next Covenant Day, instead of the old familiar pictures, we Schoenstatters will send the photo of this jug via WhatsApp, Facebook, Instagram, Mail… So that the Capital of Grace may overflow and flow into the war and crisis areas of our world, into the social and pastoral projects of our Schoenstatt Movement worldwide. 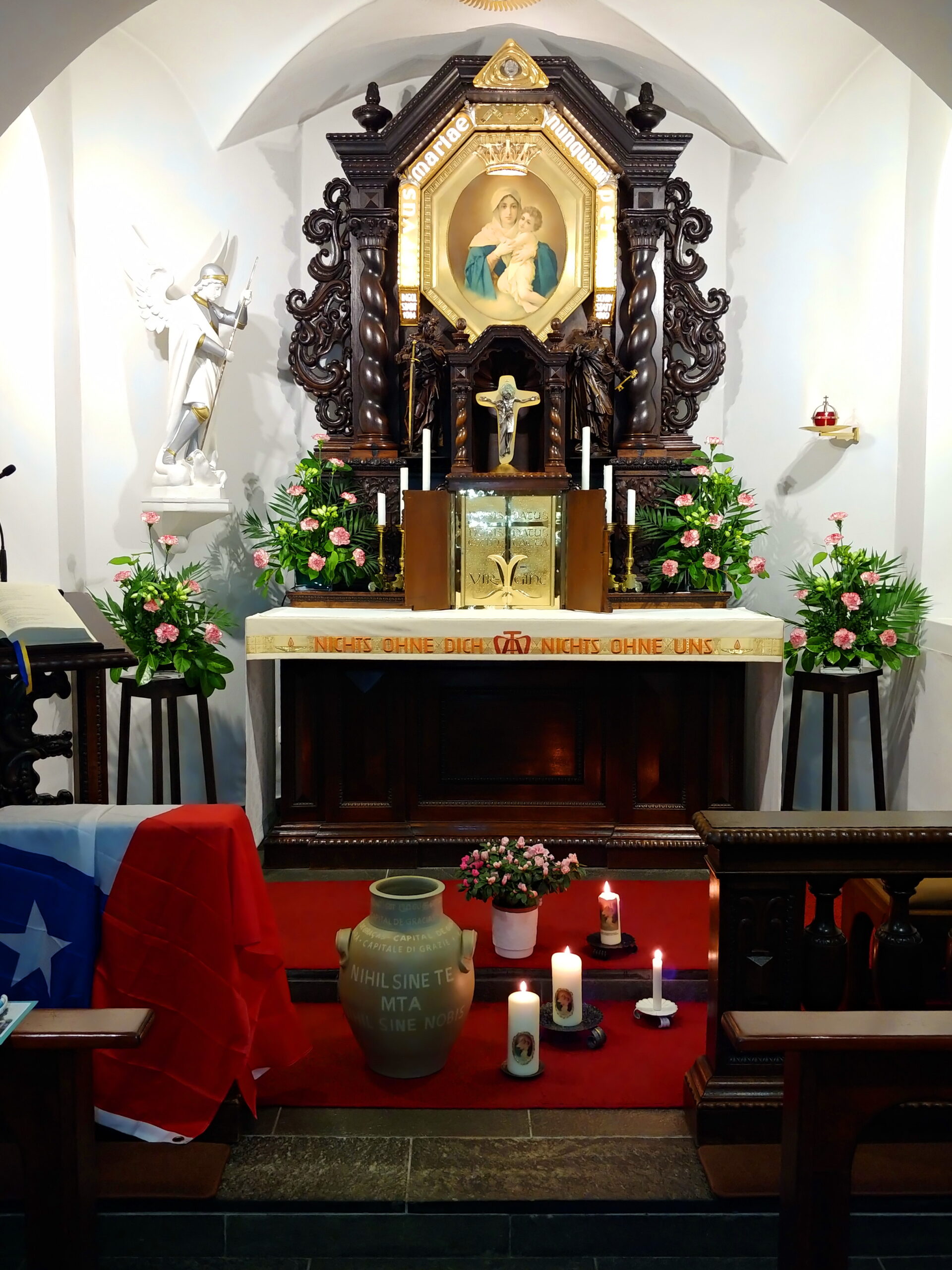 Video of the moment when the Capital of Grace overflowed: 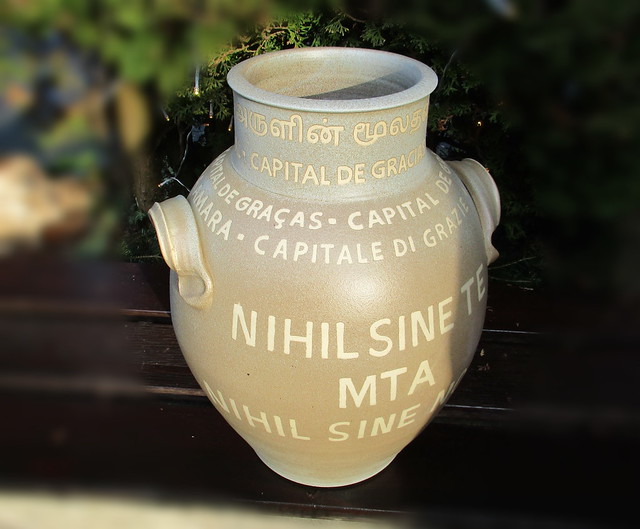