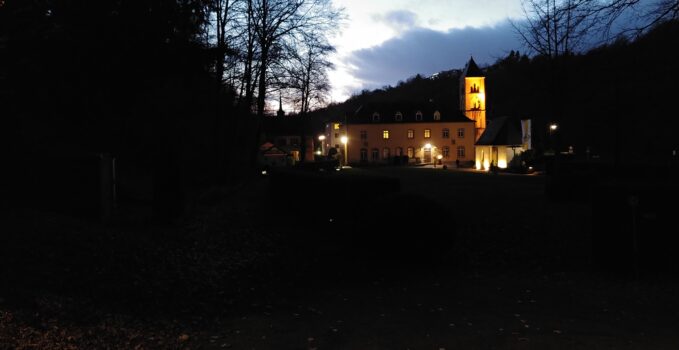 Dr. Peter Wolf to a prayer from “Heavenwards” •

On March 25, 1945, the Americans entered and occupied Vallendar, 75 years ago. On March 7, 1945, US troops in Remagen had succeeded in breaking through the Rhine. The Allies rolled up the Rhineland with massive tank units and the support of their air force. Day by day they were coming closer to Vallendar and thus to Schoenstatt. In the Dachau concentration camp, where Father Joseph Kentenich, the founder of the Schoenstatt Movement, was imprisoned as a Nazi prisoner, there was already a rumor that Schoenstatt was depopulated and the Sisters had fled. — 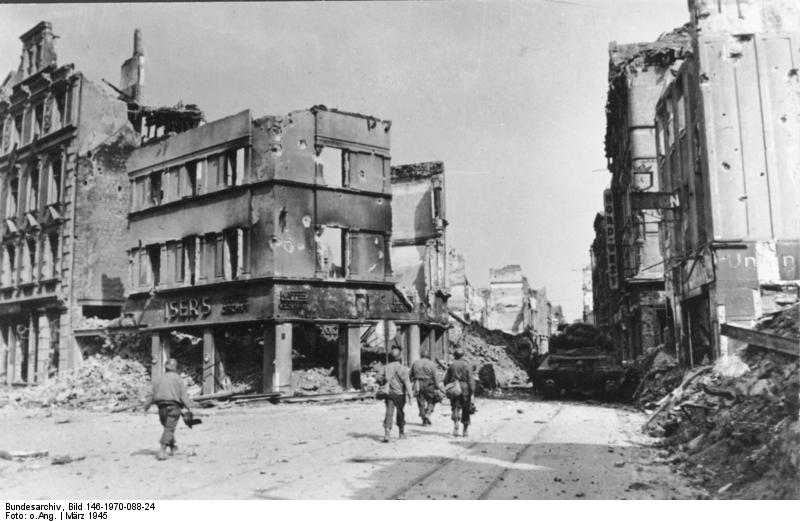 In chronicle notes from the years of the war, the following entry about the day of the invasion can be found:

“In the morning hours of Palm Sunday (March 25, Annunciation Day) the Americans invaded the city from Bendorf and Weitersburg. Shortly before noon there was heavy artillery fire. In Vallendar there was some destruction. A grenade burst in front of Sonneck and destroyed some windows. Meanwhile there are many sisters in the chapel. They don’t leave the shelter and sing: “Wrap your coat around us!” Pray, “Under your protection and shield.” Towards evening a larger part of the city was in the hands of the Americans. American artillery was in Weitersburg, German artillery at Wandhof. We heard that the next day two Panzer Divisions were to be deployed for counter attack. The greatest danger was threatening Sonneck, where the command post was located. But things turned out quite differently. Since the Americans had already advanced far into the Westerwald, and only the way to Simmern was still free, the order to retreat was given at 2 o’clock (March 26th) at night. At 9 o’clock another grenade came rushing; probably from Ehrenbreitstein. It flew directly past the small chapel, died in the pear tree at the southwest corner of the moated castle and – did no damage. The chapel has not been hit by any splinter in the whole time and has not suffered the slightest injury. – In the morning, when we wanted to go to the different houses and to the chapel to celebrate, two American scout cars stopped right in front of the castle. We celebrated mass as usual. At 8:30 a.m. the tanks rolled through the city in vast numbers.”

In the memoirs of Heinrich Foelbach, a long-time town councilor who was well known in Vallendar, the memory is also recorded that the Americans came to Vallendar from Bendorf and Weitersburg on Palm Sunday 1945 and occupied the town. He adds the following reminder of the day of the invasion:

“The streets were dead quiet. In Vallendar the public announcements used to be made with the bell, i.e. the so-called “Ausscheller” (bell-pointer) went through all the larger streets and shouted out the announcements loudly. This “Ausscheller” came that day with a white flag on a pole over his shoulder and announced: “The American commander demands the surrender of all weapons by 6:00 this evening at the house of Nefferowski’s lawyer!”

The day was experienced as liberation from the rule and injustice of the Nazi dictatorship. Those who know the history and the trust and prayer in those days of war will also understand today the gratitude that many at that time showed to the Mother of the Lord in the small Schoenstatt Chapel. The parish of Simmern still makes a pilgrimage there every year with such gratitude, which I could observe for more than 20 years from the priest’s house on Mount Moriah.

Hold the scepter in your hand;

There you alone are Queen;

cause every foe to flee.

Create a paradise for yourself there

and hold the dragon at bay.

Woman of the Sun, step forth with light

and ascend to the heights of the noonday sky.

Build from here a world

which is pleasing to the Father,

as our Savior once implored

so longingly in prayer.

May love ever reign there

together with truth and justice

and a unity which does not become massmindedness

nor lead to inner slavery.

in the dark and stormy night.

and stand in admiration before you,

so that it speak your name with love,

profess loyalty to your kingdom,

and victoriously defeat every foe.

a stronghold of apostolic spirit,

a leader on the way to holy battle,

a source of everyday sanctity,

a firebrand glowing for Christ,

until the world, a sea of flames,

burns to the glory of the Trinity.

A suggestion for the days until 25 March:

– Which line of this prayer is particularly dear to me?

– With which line do I associate a special memory?

– Which line is especially relevant today – for Schoenstatt? for the Church?