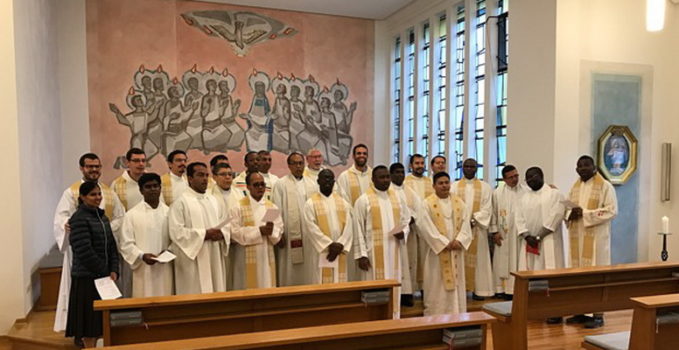 A group of priests and religious who are presently studying German in Kreuzberg – Bonn – visited Schoenstatt this past August 18 to get to know a place and a Movement within the universal Church.

“Dear future bishops, nuncios, general superiors…” and in the midst of the confusion of those present: “dear brothers and sisters” and then the ice was broken and even more so when the priests and religious from Asia, Africa and Latin America were doted upon in the cafeteria with cappuccino and cookies.  On 8 August 2017, the “Roman course” of the Kreuzberg Language Institute in Bonn (“German as a foreign language”), visited Schoenstatt, a place and a Movement in the universal Church, just as Rector Fr. Egon M. Zillekens presented it to the visitors in the Marienau House for Priests and Guests.  The group was made up of priests and religious who, at the request of their diocesan bishops or general superiors, study in pontifical universities in Rome and take advantage of summer break to take an intensive course in German.

MISSIO and ADVENIAT co-finance the program of studies in the Language Institute that is directed by the Institute of the Schoenstatt Brothers of Mary.  It is offered there to all those who participate, the opportunity to acquire in a rapid and exhaustive manner the knowledge of the German language that is necessary for their scientific studies.  By means of the German language, they also receive social content, both cultural and political.  On the weekends, animated exchanges develop in the nearby parishes on the forms of life of the young churches in Africa, Asia and Latin America.  The “priests of the German course,” substitute for German pastors during summer vacation time in various parishes in the Bonn and Cologne area.

What interests the “Roman Course” about Schoenstatt?

“What does the “Roman Course” interest about Schoenstatt?”  This opening question by Fr. Egon Zillekens surprised those whom he addressed charmingly:  “You surely will come to be particularly responsible priests in your dioceses.”  And these important priests of which half were diocesan priests and the other half were  priests in religious orders, he assumed, were only and specifically interested to know what Schoenstatt does for the Church and concretely, what does it do or can do for them?  From this question, Rector Zillekens based his dialogue with them after a brief description of the House and what it offers.

What moves these priests?  What moves priests? Based on his own experience, he knows the three areas where worries and searches of all priests exist, and so he told them, summarizing in three points, what moves the priests in the of Federation of Priests that he leads:

“After the few weeks in which they had learned the German language, it was still not possible for them to understand everything in German.  Therefore I spoke to them in Spanish and one of the students translated into Italian.  In this way, everyone was able to understand,” related Rector Zillekens.

The pamphlet published in 2010 on the essence of the priesthood was very well received, while  the ecclesial insertion of Schoenstatt and its  internationality were transmitted via storytelling.  Like for example on the evening of the Soccer World Cup in 2006, when in the “Klause” (the emblem bar of the house) “we helped Brazilean Cardinal Hummes overcome the defeat” of Brazil with the 2:1 game of the Netherlands against Brazil.

Committed to the Council

A beautiful image exists of the Saint of the day – St. Dominic with the Blessed Virgin Mary.  In it, an indigenous child gives fruit to the Baby Jesus and the Blessed Mother gives him a Rosary.  A Covenant, “trusting in the Lord whose presence is the source of life in abundance and beneath the mantle of Mary will be able to rediscover the creativity and power to be protagonists of covenant culture and thus generate new paradigms which regulate life in Brazil,” Francis said to the youth of Brazil a few years ago.  Covenant culture, something very much about Schoenstatt and in the midst of the heart of the post-conciliar Church that goes out to the outskirts of human existence.

A word on the Movements in the universal Church has to be said here: and that is done with the words of St. John Paul II and Cardinal Kasper on a Church needing both lungs to breathe – East and West, Hierarchy and Charism, dioceses and movements.

Here something had to be said about the Vatican Council and the way in which a Joseph Kentenich sees the displacement of accents from a renewed Church with the stamp of the Council:

That these topics are very close to what Pope Francis lives, announces and demands, the “Roman course” discovered on its own and being very surprised.

Around the table of the Lord

With a Holy Mass in the beautifully restored Marienau chapel and then with a good lunch, the visit in Schoenstatt that began in the morning in the Original Shrine was complete: joyful, relaxed, and in priestly community.

And in the end, a particularly moving moment.  One of the priests approached with his mobile phone.  His mother, he said, belongs to the Schoenstatt Movement and it would be very beautiful to send his mother a blessing through a video, live, since she had asked him to go to the Shrine on her behalf…and naturally they received the blessing, the mother, the telephone and the priest…for that day…for the next steps…and forever.

At the end of the day, just as Rector Zillekens had expressed initially, it was possible to take a look together.  Regardless, that is what it was for this priest.