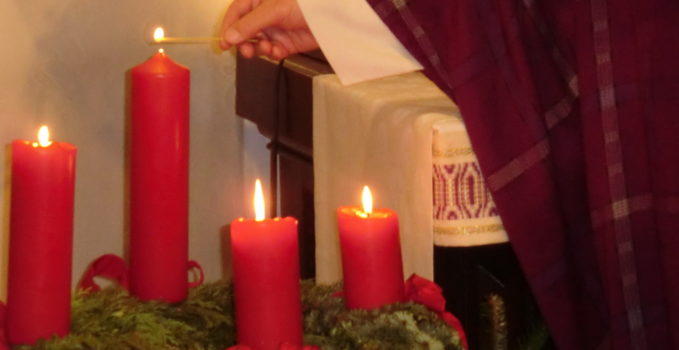 “During this season of Advent in the Original Shrine, we want to tell you…”

“Then, I opened the door, and I found myself before the Blessed Sacrament. After this long trip through cold and darkness, tired and without even knowing if I would find the Shrine, I found her myself, illuminated this this warm light. It was time for Eucharistic Adoration, tears fell, and I did not care about anything else… I arrived and there was only joy within me, simply joy, within me; it is Christmas.”

Gabrielle Pietro belongs to the Schoenstatt Girls’ Youth in San Antonio, Texas USA. She worked as a volunteer in a town in Belarus, where she taught English. Now, she said, it was time to return home, but first, she wanted to visit the Original Shrine for the first time. “I was on the train, and I found a website that said the Shrine closed at 5:00 p.m. I thought that I would not arrive on time, however I tried…” Her eyes gleamed with pure emotion.

Now she was here, with an enormous, heavy backpack, and without lodging. I thought about this upon leaving the Shrine after a long time. Standing in front of the door that was ajar, I asked in a low voice the woman who was going to the Shrine, “Hotel?” and immediately she understood and changed her plans, like Joseph in the Gospel on Sunday the 18th (Mt.1:18-24). Where can a room be found for a young woman on a Saturday night, who like Mary and Joseph was looking for lodging without having made a reservation first? The two went to House Marienau, and after a quick phone call to Fr. Egon Zillekens –Gabrielle had a room. 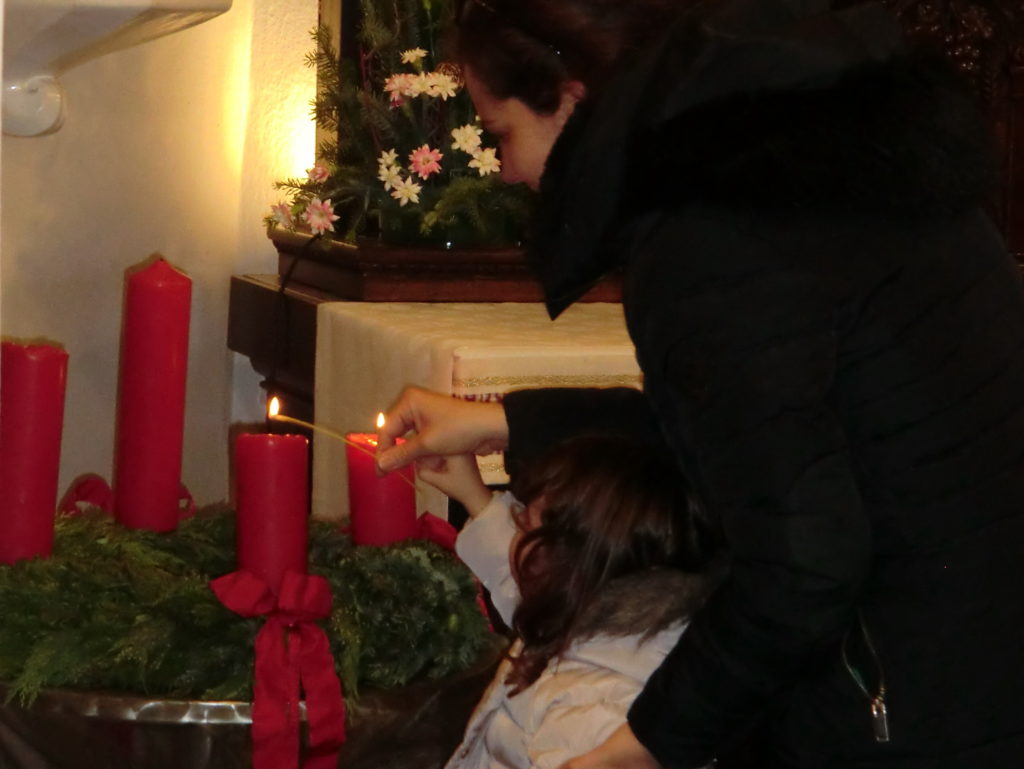 Internationally and as a family

At the beginning of the Holy Mass at 7:00 p.m. in the Original Shrine, the Rector, Fr. Egon Zillekens, asked Gabrielle to light the first candle on the Advent wreath. A beautiful ritual – since on the eve of every Sunday of Advent the candles of the wreath are lit again to the tune of a typical German song for this time. This is the beloved Advent; we want to tell you…” It was a moment to pause in the midst of this rapid and busy time before Christmas. Little Alicia, from Brazil lit the second candle, and we continued, internationally and as a family, while the sacristan, Bernadette Weweler, lighted the fourth candle. Schoenstatters from Switzerland and Belgium were also present, as well as some from Brazil and India. Fr. Egon Zillekens spoke about Joseph, whose plans were turned upside down after the divine intervention in his life and of his espoused. Do not be afraid…God’s great promise, which does not protect us from chaos, but it does from fear. A promise that makes us flexible and willing to be in agreement with God’s desires, and we do not hang on to something that the winds of change and the breath of the Holy Spirit want to substitute for something new. From this it was only a small step to reach Pope Francis, who celebrated his 80th birthday on 17 December…and what he told the Schoenstatt Movement during the Jubilee audience of 100 years of Covenant. 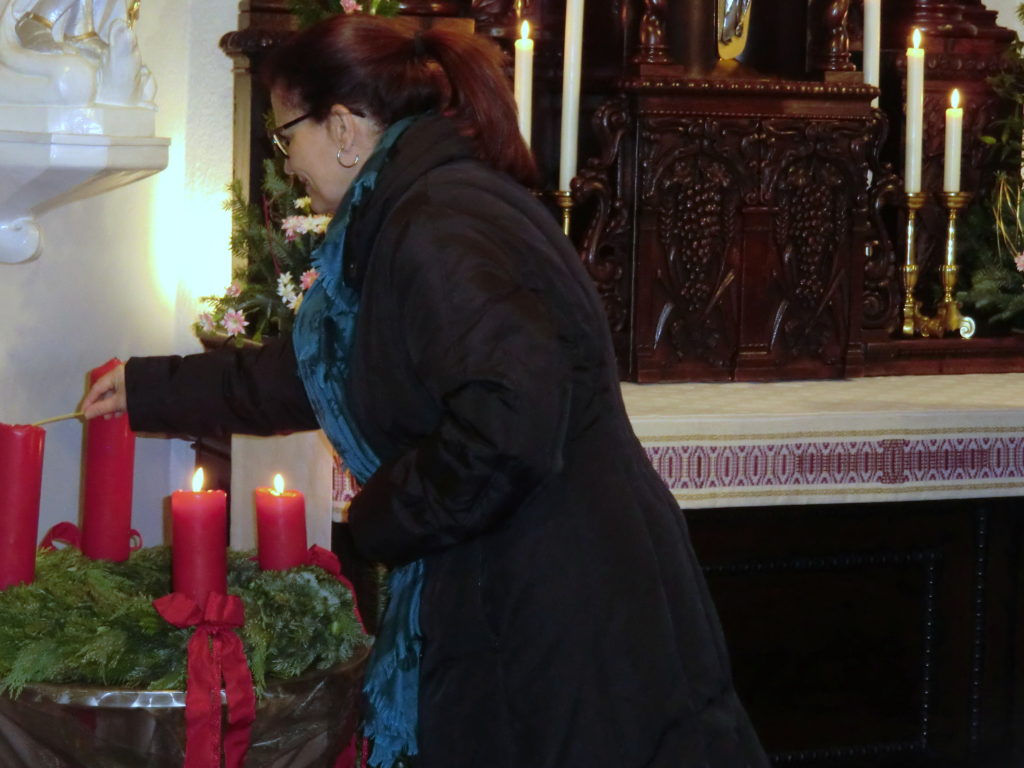 The “night blessing” followed the vigil Mass. People who did not have time to stay for the 10-minute blessing began to leave. However, the Shrine continued to fill up, and after a gentle invitation from Fr. Zillekens, the recent arrivals went forward instead of staying at the back. So everyone fit in the Shrine, even a group of French pilgrims who arrived with Fr. Jean Marie Moura, a diocesan priest, who was appointed rector of the Cambrai Shrine by the Bishop of the diocese. They brought twenty pictures of the Pilgrim Mother, which were made in France, and soon they will be commissioned from the Cambrai Shrine. The Schoenstatt Family from Costa Rica was also remembered. In three months, they will bless their shrine…Sr. M. Resia Käppeler translated and the night blessing continued in French and German. 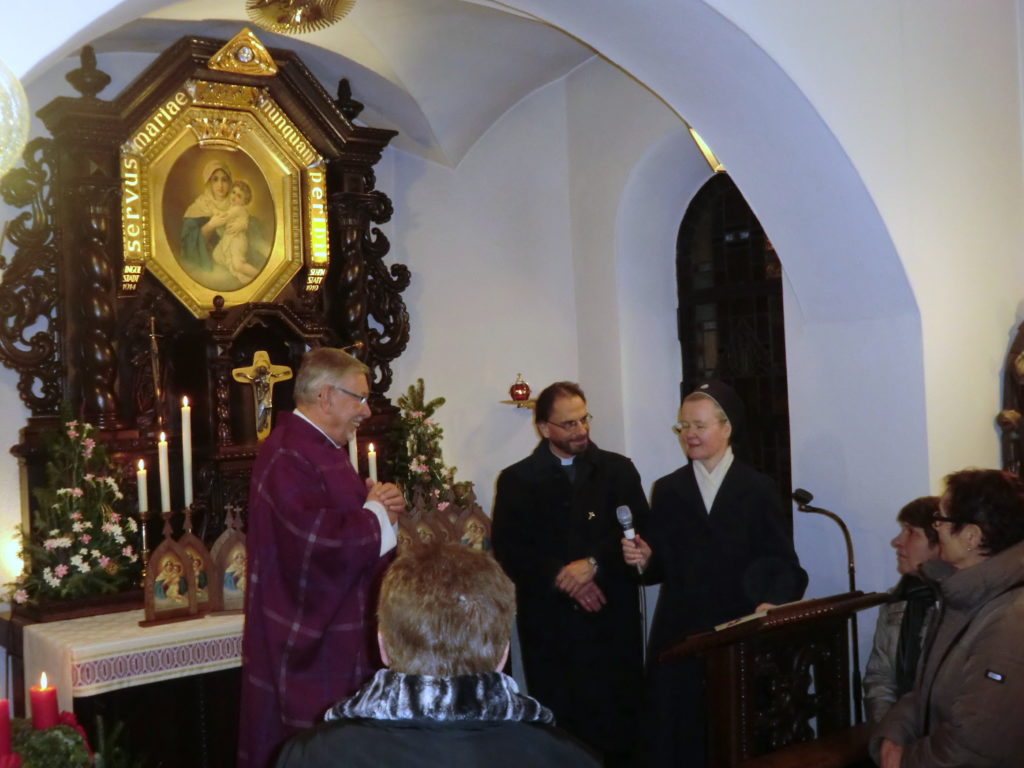 Bless us now and from this place…

Tonight we wanted to renew our Covenant of Love in this holy place.

We did it by reflecting on what happened during the day…

We thought about the people, who we have encountered

In what you have permitted us to do in covenant with you and with others,

in what turned out well and also in what we failed.

On this night, we did not come with empty hands, and we placed them in the jar during a moment of silence.

The Covenant Prayer was prayed and the blessing followed. This is the reason it is a central moment and it is called “night blessing.” It is a blessing of solidarity, a blessing of encounter, since Fr. Egon Zillekens invited everyone present to name someone they wanted to include in this blessing. Thus it was done: the young couples who were in Schoenstatt, the refugees, the residents of Aleppo and all of Syria, for Pope France, for everyone who receive the Pilgrim Mother in France…

Bless now and from this place every member of our worldwide family, who took a missionary step today.

Bless now and from this place everyone who left his or her suffering in the jar of the Capital of Grace.

Bless now and from this place every member of our family, who is gravely ill.

Bless now and from this place the people who need our solidarity the most.

Bless now and from this place every member of our family, who you will call to your side this night.

Bless now and from this place the person whom we especially entrust in you Covenant tonight.

Bless now and from this place the people who suffer from violence, terrorism and natural catastrophes.

Bless now and from this place Christian ecumenism and the dialogue among religions.

The Original Shrine seemed to grow larger, filled with hundreds of people. Gabrielle does not understand the language, but the atmosphere, well the atmosphere is wonderful.

All of this makes the eve of the fourth Sunday of Advent and the eve of Covenant Day to almost be like Christmas. 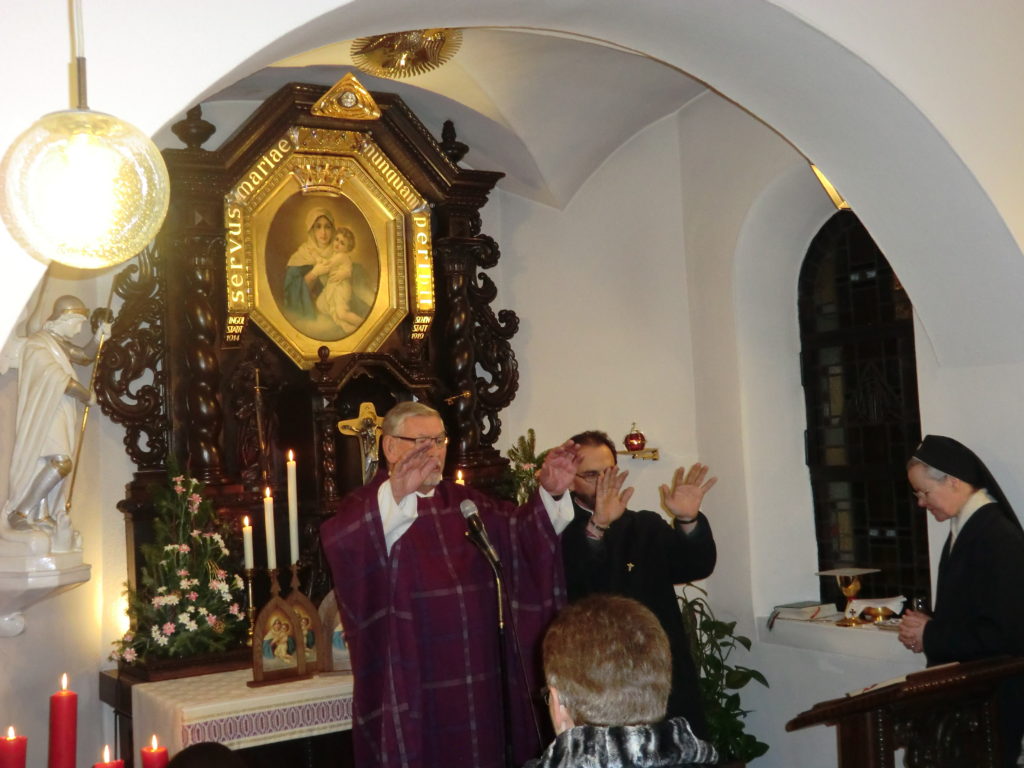