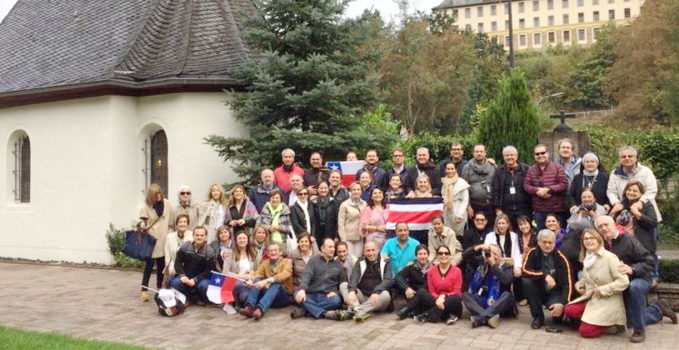 The Costa Rican Family of Hope at the Original Shrine

It was short, only four days, and at the same time, the program for a large group of couples from Costa Rica was intense. They visited the Original Shrine and Fr. Kentenich’s tomb before their pilgrimage to the Holy Land. The majority of them belong to the first two Schoenstatt Family Federation courses; everyone was optimistic for their first or second visit to Schoenstatt and the Holy Land. Perhaps it was a pleasure to travel for the last time “to a foreign country” to visit a Shrine.

The altar for the future first Shrine in Costa Rica and also the first one in Central America, is already there. The grounds for the Shrine are already chosen, and when the approval for construction arrives, the “Family of Hope” Shrine will be born in the first half of 2017. It is a petition that this group repeatedly took to the Original Shrine during this pilgrimage.

The program included visits to Gymnich, Fr.Kentenich’s birthplace, to Cologne, several Schoenstatt Shrines and Trinity Church. The night visits to Fr. Kentenich should be especially emphasized, a road that they traveled by foot on their return, even in the rain, and which ended on Monday, 3 October, when they made their childlike covenant with Father.

The group stayed at Marienau House, where despite the damage from the flood in June, with the basement, kitchen and dining room still out of use, everyone felt comfortable.  The dining room, the former conference hall, offers a beautiful view of the green area; the view is such “that one does not want to leave from here,” said Fr. Zillekens, the house rector.  The gallery table with a view from above and the round table at the main door are especially popular.

An almost built Shrine and Belmonte?

On the night of 3 October, along the way and exactly in that room of Marienau House, where Fr. Kentenich ate and chatted with his guests when he was here,  there was a talk with some members of CIEES (Ibero-American Congress of Businessmen and Executives) from Costa Rica about the race for the last column of the Retreat House, Domus Pater Kentenich, in Belmonte Rome.  CIEES from that country won.  “And Costa Rica is the only country that has a room in Domus Pater Kentenich, without having their own Shrine!” When the rooms were awarded, someone intervened so that Costa Rica would be there since the Shrine is almost built. Then, they suggested ideas for the design of this room with elements typical of Costa Rica.  What are they? Only those who know Costa Rica know, or if you read the first article ever published on this website about Costa Rica…

On Tuesday, 4 October, after Mass in the Original Shrine, the Costa Rican pilgrims departed for the Holy Land.