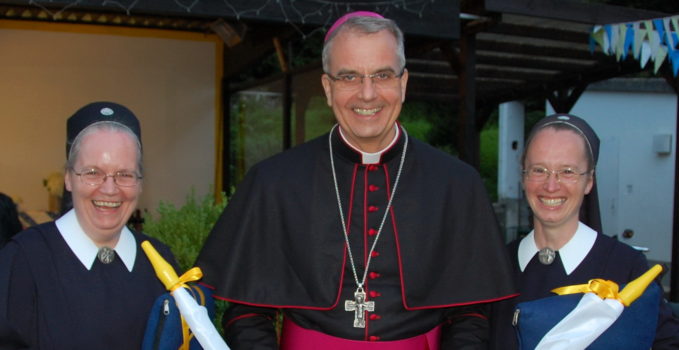 Changes to the Pilgrimage Team in Schoenstatt

GERMANY, from Heinrich Brehm, Press Office of the Schoenstatt Movement in Germany (schoenstatt.de) • 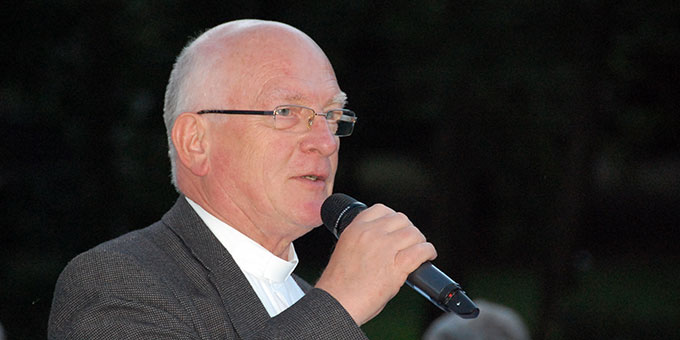 On Friday, 15 July 2016, a Mass of Thanksgiving followed by a reception in the area beside the Pilgrims’ House near the Pilgrims’ Centre in Vallendar, heralded the hand-over to a new “Pilgrimage Team”. For thirteen years the team composed of the Pilgrimage Leader, Sr Anne-Meike Brück and Sr Bernadett-Maria Schenk, and Fr Franz Widmaier (Photo), the Pilgrimage Director, have worked intensively “to connect many people with the working of God through the Blessed Mother and the Original Shrine”, as Sr Anne-Meike said in her words of thanks to the gathered guests. That evening Sr Anne-Meike and Sr Bernadett-Maria said their official good-byes, and the new team, which will start work in August, was introduced.

Thanks for the witness of their faith

During Holy Mass in the Pilgrims’ Church, Auxiliary Bishop Jörg Michael Peters of Trier, thanked the two Sisters for their work, which had clearly demonstrated that the message of faith is always mediated by people. If God’s dream of his creation and for his creation is to be fulfilled, he needs the involvement of people; he needs witnesses of God’s empathetic love. Through the activity of people, God wants to enable people to experience his love, which is like the love of a faithfully caring Father and a loving Mother. “This evening we thank Sr Anne-Meike and Sr Bernadett-Maria for the witness of their faith and for the way they were able to address pilgrims directly, accompany them with inspirations, and even to win the co-operation of one or the other for work at the Pilgrims’ Centre”, Bishop Peters said. In this way a network has increasingly been created that gives a home to many people far beyond the Schoenstatt Movement.

With great commitment and the Blessed Mother behind them 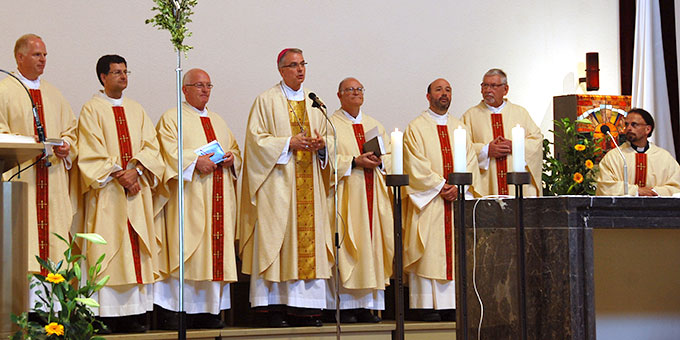 Thirteen years ago the new Pilgrimage Team walked through a door without knowing exactly what awaited them, the former Pilgrimage Leader related. “The step over the threshold was a risky one: A newly built Pilgrims’ Church, a huge debt, a team with little experience in pilgrimage work. But we had great commitment and the Blessed Mother behind us.” Beside the existing pilgrimage formats, such as the diocesan pilgrimages of the Schoenstatt Movement, pilgrimages of groups coming in buses, and individual pilgrims from home and abroad, it became possible through tenacious perseverance to establish, for example, the “International Festival of Encounter”, or the “Motorbike Pilgrimage” with the smell of petrol and the sputtering of engines. In the meantime the latter has taken place at other Schoenstatt Centres. The “Ten Minutes at the Crib” during the Christmas Season became a crowd puller that reached far beyond the region. The fact that in the meantime there are many points of contact with Missions for Foreigners in Germany, with Evangelical Christians and also Muslim groups, forms part of the record of the departing Pilgrimage Team as is their contact to people in need of social support, or who come to the faith through being helped in times of crisis.

A vast field of solidarity and help

Sr Anne-Meike expressed her gratitude to all present for the vast field of solidarity and help they had experienced as a team. “Please take our thanks very personally: Auxiliary Bishop Peter, Dr Alexander Saftig, our district chief executive, Princess Gabriela of Sayn-Wittgenstein-Sayn, Gerd Jung, our Mayor, Schoenstatt Fathers, musicians, gardeners, families, joint organizers, the Schoenstatt Family, Superiors, Movement Leader, altar servers and helpers during Holy Mass, parking attendants and photographers, the police and fire brigade …” A special thanks is due to Fr Franz Widmaier, the Pilgrimage Leader, who will continue in office, and all the Schoenstatt Fathers and Diocesan Priests who have offered their priestly services in the Pilgrims’ Centre.

Sr Bernadett-Maria introduced the Sisters who would belong to the new team at the Schoenstatt Pilgrimage Centre and the Pilgrims’ House.

From October, Sr M. Ana Teresa Nales Rückauer, a Spaniard, would replace Sr Mariann Märzheuser as Superior and Director of the Pilgrims’ House.

Sr M. Janika Trieb, from the diocese of Rottenburg-Stuttgart, will take over the task of Pilgrimage Leader at the beginning of August.

Sr M. Doriett Mölenkamp, from the Muenster diocese, will be responsible in the new team for German-speaking pilgrims.

Sr M. Sara Bauer is sacristan, and Sr M. Lisane Gosler from Brazil will work in the Information bureau.

Other members of the team are Sr M. Estrid Horn and Sr M. Doris Winter, from Germany, and Sr M. Isabel Machado, from Brazil. At the beginning of August Sr M. Casilda Becker, from Brazil, will join the team.

Sr M. Anne-Meike Brück, has been appointed to take over the pilgrimage work at the Schoenstatt Centre in Trier from October 2016. Sr Bernadett-Maria Schenk will prepare herself for a new task in the German Schoenstatt Movement from August. The two Sisters were happy to receive a cheque from the Lions Club in Vallendar, which will be used to further equip the Pilgrims’ Church. They took leave with the words, “We were allowed to witness how the Blessed Mother works from the Schoenstatt Shrine in Schoenstatt and draws people to herself. Mary will continue to do so.” 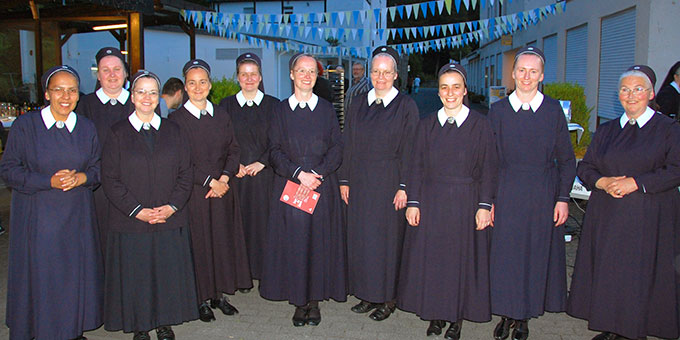