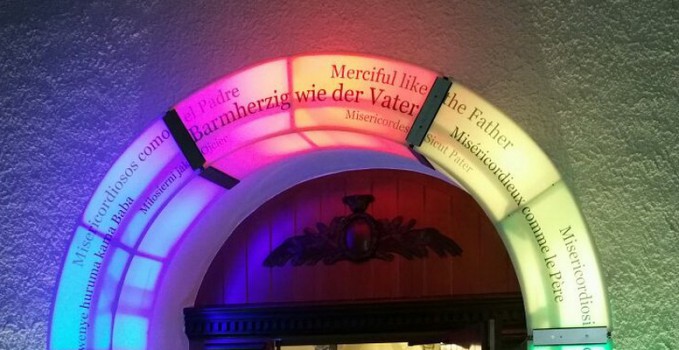 “Please remove this quickly. May the Shrine be our Bethlehem once again on Christmas…”

Usually, the schoenstatt.org editorial team is sincerely happy with every comment made about an article, whether written publically on the page or sent only to the editorial team. However during the days before Christmas, a true avalanche of comments arrived that concern us and challenged our commitment of taking our readers’ dialogue seriously, who we always see as collaborators since they contribute their interest, time and also their questions and comments.

It is about the Original Shrine’s door– a door that on 13 December opened as a Holy Door. The profound joy for the opening of this Holy Door in our Original Shrine brought about mixed reactions: shock, indignation and horror at seeing the published photos. Especially one, which shows an arch – “plastic and metal box, illuminated inside with several colors” (description of a Chilean), which appeared on 13 December around the door of the Original Shrine…surely it was done with goodwill.

“Who authorized this? It is in incredibly bad taste, the lack of harmony for the surroundings, the lack of “religiosity”, it looks like a McDonald’s commercial or of some other hamburger chain!” someone from Argentina commented. 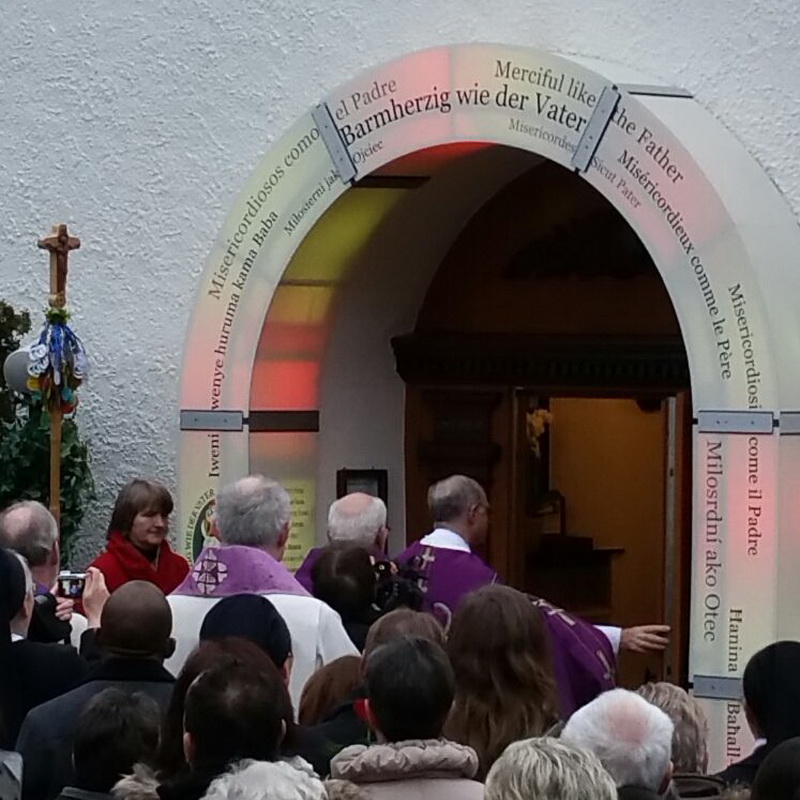 “It is inappropriate for a holy place

What a difference from the holy door of Santa María de la Trinidad [Holy Mary of the Trinity] Church in Tupãrenda, or the holy doors decorated with flowers at other Shrines– Santa María, Atibaia, Curitiba, and so many others.

“The door is hidden by this box…it removes dignity…it can hardly be seen, only the lighted box stands out,” commented one German, who was there. A compatriot, surprised – like many others – by the novelty on 13 December wrote: “I am more and more ashamed for our Original Shrine, for its interior and especially now for its exterior because of this arch, that has the seduction of a Venetian Ice Cream parlor commercial. Many of our things are not presented aesthetically, but with such absurd kitsch, we have to do something so it will disappear.”

Comments have been received such as this one from a Chilean: “HOW HORRIBLE!!! I never imagined that bad taste would go so far… Who decided something like this??? Hopefully that lighted statement that is totally inappropriate for a holy place will be removed quickly. It is like entering an amusement park, not to say something worse. I am ashamed to introduce our Original Shrine to the world decorated this way!!! It is a mockery!!! How much money has such a horrible thing cost? My house looks better, with the subdued and beautiful Christmas lights it now has. REMOVE THAT HORRIBLE THING QUICKLY!”

Or this one sent from Frankfurt, Germany: “The photos of the Original Shrine horrified me. The comment about the commercial for the ‘Venetian Ice Cream Parlor’ is a subtle way to express it. In the big cities close to the train stations, some businesses of dubious reputation also use this kind of exterior commercial of such “good taste.” In spite of all the mercy, one has to turn the eyes away…the best thing would be dismantle the illuminated statement. How many handicapped children could have a home, for example at the Mary’s Home at Mar del Plata, how any families could have received their little home from the 100 houses project in Paraguay with the money that this lighted device cost? Less is something (much more!)”

However, it does not seem that it cost much money, since a pilgrim on 18 December commented: “Upon going on pilgrimage to the Original Shrine on 18 December, I saw that it was not done professionally, but rather, plastic and metal materials were used obviously bought at a store of construction materials. While the internal structure is the arch that was used during the jubilee to place flowers. There are sharp edges and it worries me that the children could hurt their hands or faces upon touching them…” 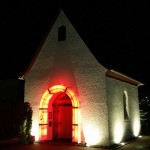 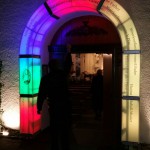 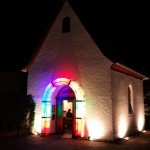 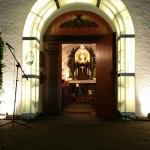 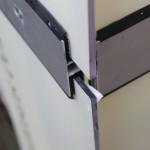 Since it seems that, hopefully, not much money was spent, and since it is only supported with a nail, the hope increased that a “miracle of Christmas Eve will occur,” wrote another from Argentina: “What have you placed around the door of the Original Shrine? This is not worthy of the place! You offend the image that we all have of the holy place. Please remove this quickly. May the Shrine again be our Bethlehem on Christmas…”

“It looks like a juke box. The photos that I saw as of now only had a yellow light, but now I see it with all its strident colors… And will the poor Original Shrine remain with this poor decoration of bad taste for the entire year?” a comment from South Africa.

“If one closes their eyes, it is a little less horrible,” a pilgrim, who passed through the Holy Door of the Original Shrine consoled himself. “And now I remember a comment by a friend, who told me that ‘her letter to the Child Jesus’ had a single desire: that this ugliness disappear…” 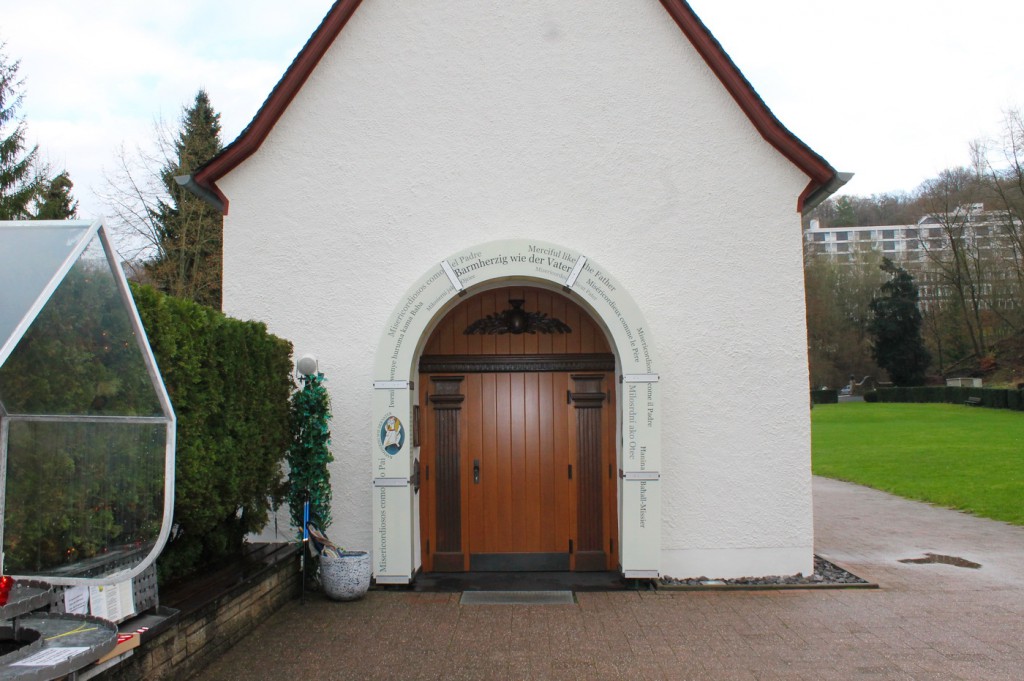 It is Christmas in the Year of Mercy. We do not want to provoke a wave of protests on our page during this time.

For this reason with this article, we take the voices of people seriously, but we, as schoenstatt.org editors, are not the “leadership” to receive requests and complaints about this issue. It is the rector of the Original Shrine, Fr. Antonio Bracht: [email protected]

The editors know all the names. 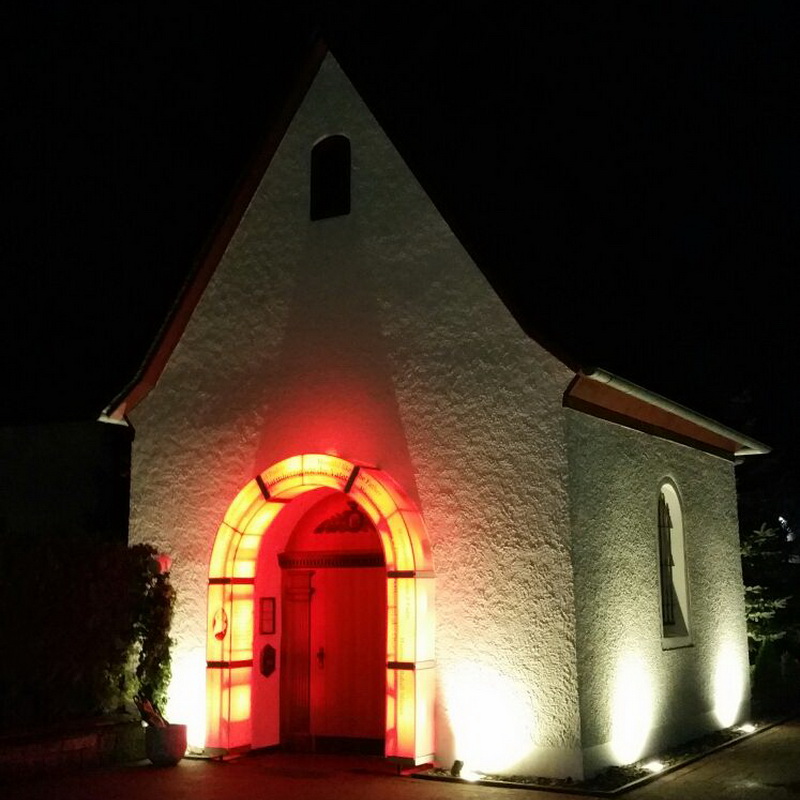