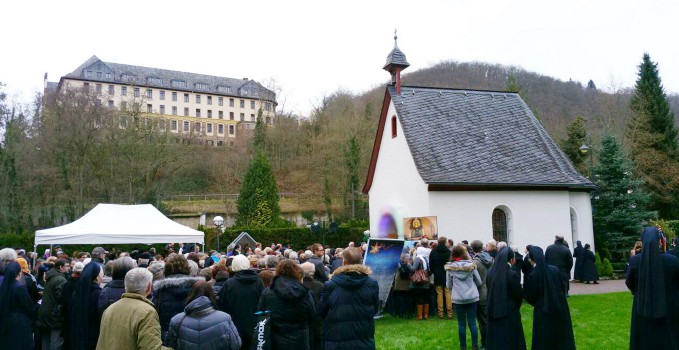 Original Shrine: The opened Holy Door as a petition for a renewed Miracle of the Holy Night in the sense of a merciful heart 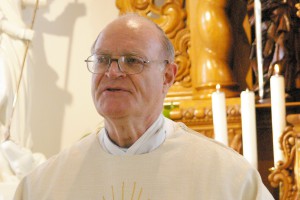 “The door is a symbol of Advent: The Lord is coming to us; we want to open the door to him and welcome him.” These were the words of Fr Juan Pablo Catoggio, Chairman of Schoenstatt’s General Presidium, in his sermon on the Third Sunday of Advent. “This year the door is a particularly telling symbol. Our Holy Father, Pope Francis, has proclaimed an extraordinary Jubilee Year of Mercy. Last Tuesday, 8 December, the Feast of the Immaculate Conception, our Holy Father opened the Holy Door in St Peter’s in Rome. Today, however, for the first time many “Doors of Mercy” will be opened at many places all over the world. Our bishop has nominated the Original Shrine in Schoenstatt to be such a Holy Door, and honoured it with a special indulgence. So today after Holy Mass we may open the Holy Door of Mercy at the Original Shrine!”

An article in the Koblenzer Rhein-Zeitung reported that around 800 people gathered in grey, damp and mild December weather for the opening of the Holy Door of the Original Shrine. Since it was such a moment of grace and joy, the Christmas trees were already alight in the Pilgrims’ Church. On that 13 December, the Third Sunday of Advent, thousands of “Holy Doors” were opened from one end of the earth to the other – in all cathedrals and countless pilgrimage churches and shrines. The website of the Jubilee of Mercy shows a (very technical) map of many, but by far not all these places of grace and mercy. We begin to guess the importance when Fr Juan Pablo Catoggio quotes our Holy Father, ““By crossing the threshold of the Holy Door, we will find the strength to embrace God’s mercy and dedicate ourselves to being merciful with others as the Father has been with us” (MV 14). That is the motto of the Holy Year.” 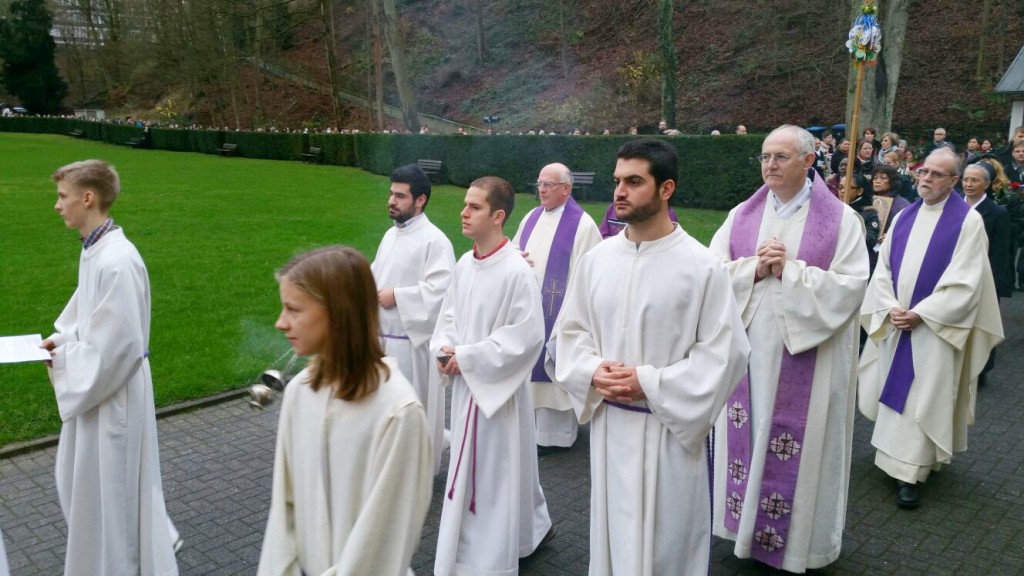 The two dimensions of mercy

Fr Juan Pablo Catoggio explained the two dimensions of mercy that are the crux of what Pope Francs is aiming at with this extraordinary Holy Year.

“The first and basic dimension is the mercy of God the Father, “a God merciful and gracious, slow to anger and abounding in steadfast love and faithfulness” (Ex 34,6), which is repeatedly given to us, and which we repeatedly experience. The second dimension is our attitude of mercy to everyone, and in particular those who suffer. Two parables of Luke’s Gospel – the Gospel of mercy – clarify both aspects. The first, the vertical dimension as it were, finds expression in the parable of the “prodigal son” and the merciful Father (Lk 15). God embraces us with his mercy and forgiveness. The second, horizontal dimension, is illustrated in the parable of the good Samaritan (Lk 10): He practices mercy towards the stranger, whom he sees and treats as his neighbour. God’s mercy, which we experience in the forgiveness and tender love of God, and in his consolation, becomes effective in actual works of love towards the people around us. Mercy has something to do with action, as we have heard in the Gospel.”

Going in and going out. Vary practical. Living in a covenant with this God of Mercy, and Schoenstatt going out to show this mercy to the homeless, the prisoners, the hungry, the isolated, the desolate, or the refugees. … The actual people in our actual reality 2015/2016.

Then Fr Juan Pablo Catoggio led us into the deeper dimensions of the Holy Door. “Jesus, the Good Shepherd, said of himself: I am the door (Jn 10.7). His pierced side, from which his merciful love pours out to us, is the door of grace; it became the door to the Father, it is the door of mercy in its original meaning.” 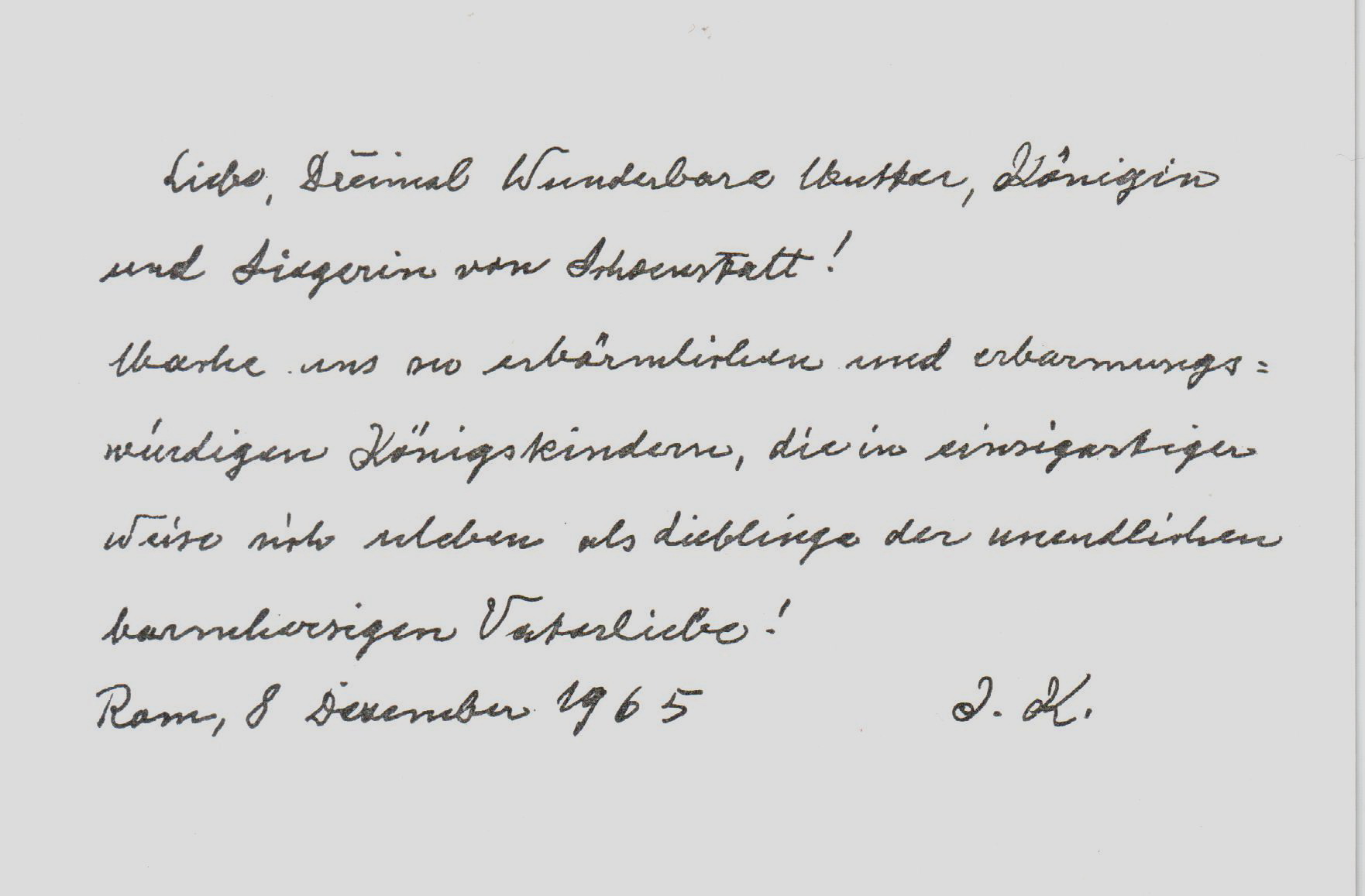 This Advent Schoenstatt commemorates the events that took place fifty years ago when Fr Kentenich returned home from exile on Christmas Eve 1965. The message of the General Presidium about Christmas 1965 integrates this jubilee into what is happening in the Church. So Fr Juan Pablo Catoggio connected the opening of the Holy Door of the Original Shrine on 13 December with Fr Kentenich’s letter to the Schoenstatt Family, which was written on 13 December 1965.

“On 13 December fifty years ago, he addressed a message to the Schoenstatt Family. As the fruit of God’s guidance, and like a permanent programme, he spoke of a new image of the human person, God and the community, which are saturated by God’s mercy. We can only marvel at the way our Holy Father’s message for the jubilee matches that Christmas letter of Fr Kentenich fifty years ago.

“Fr Kentenich expressed his message in a most beautiful and profound prayer, “Dear Mother Thrice Admirable and Queen of Schoenstatt, see to it that we experience that we are miserable children of the King who are worthy of mercy, and hence go through life in a special way as the favourites of God’s infinitely merciful fatherly love.” 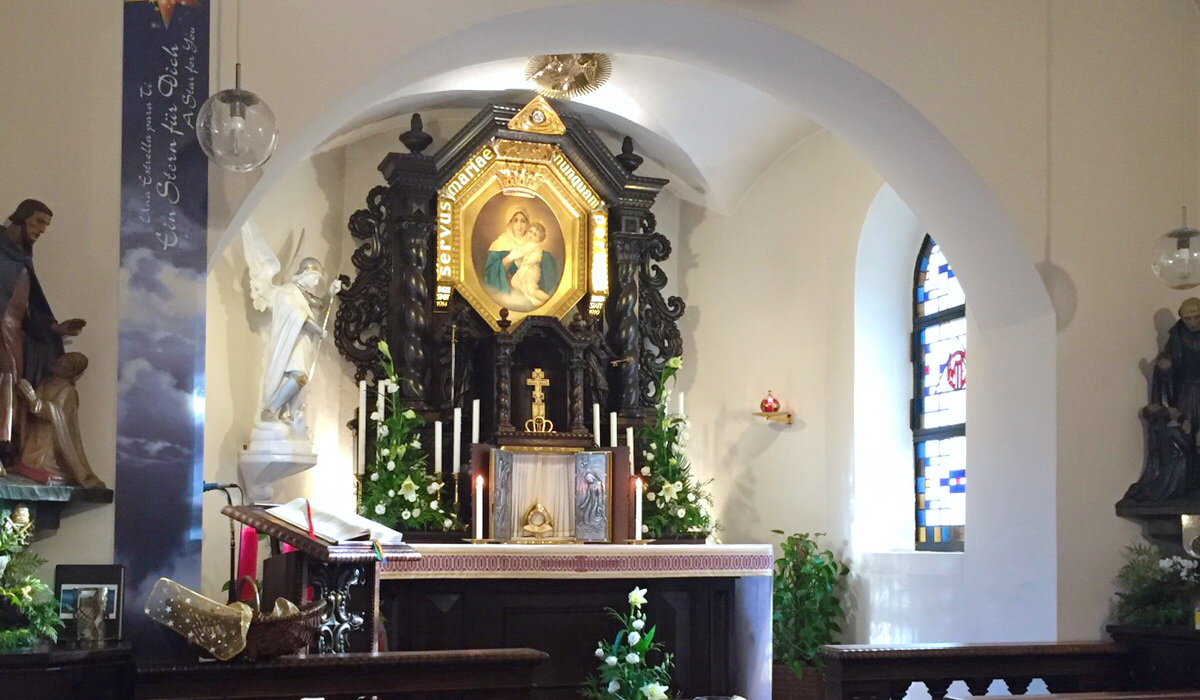 After Holy Mass everyone went in procession to the Original Shrine where Fr Juan Pablo Catoggio opened the Holy Door – the door to the Original Shrine that was so beautifully renewed last year. The words rang out in a number of languages; at that moment the actions were stronger and all could understand them.

Perhaps what Fr Juan Pablo gave the Schoenstatters on this 13 December to take along with them on their way to Christmas:

“Perhaps we may wish ourselves a new Miracle of the Holy Night in this sense of a profoundly merciful heart, a heart that has been touched and gripped by God’s mercy, and give and show this mercy to others. That would be a lovely grace we could pray to be given in the shrine in this year. “

Someone asked, “What would happen if every, truly every Schoenstatter were to place the request for this grace into the Crib, and present it to the Divine Child as their Christmas wish?” 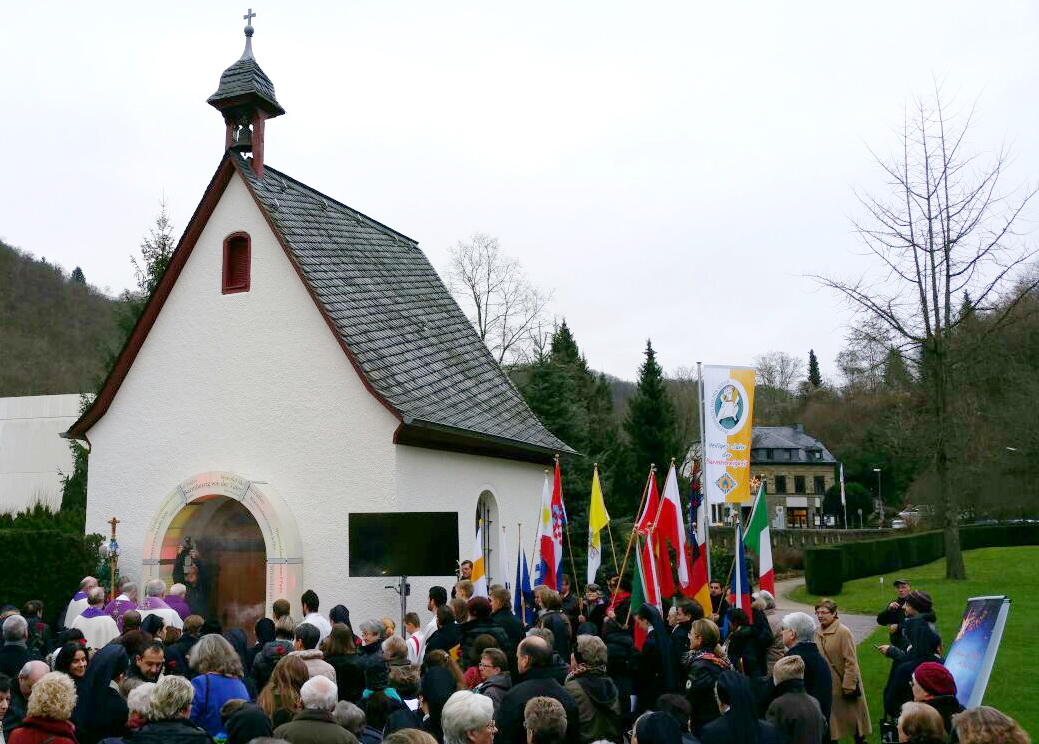