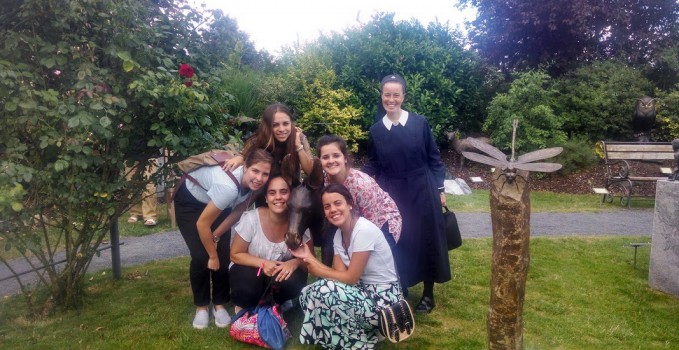 Young girls relate about their “Time in Schoenstatt:” a project of the Sisters of Mary

Around the Original Shrine, Inés Lagos •

“Sister, do you have girls?” Many people who live in Vallendar or its surrounding areas and who know Schoenstatt Zeit (Time in Schoenstatt) ask this question.

This “Time in Schoenstatt” gathers girls from the youths of different countries for two months in which we work in the Sisters’ different houses, and we visit the most significant places in the Movement’s history.

But above all, it was about a “time for Schoenstatt”: to live Schoenstatt, to allow ourselves to be sheltered by the Blessed Mother and to mature in the shadow of her Shrine; to know the Family, who so clearly shows the reality of being an International Family like nowhere else.

We lived this time being trained in Father Kentenich’s school and attaching ourselves to the youths of other countries, with whom, we had many differences, but a similar ideal: to be little Marys.

May these lines be an expression of gratitude to the Sisters, the couples, and to all those who gave of their time to make our stay an experience of Family, of home and a heavenly experience.

End of October 2014…All the pilgrims who traveled to Germany for the Schoenstatt’s 100 years returned to their countries.

To see and to hear the stories and all the joy that my friends and acquaintances brought about the Jubilee generated certain restlessness and the desire to travel to Schoenstatt began to be kindled.

I knew about the program, “Time in Schoenstatt,” but the outlook was not good; there was no room. My good friend encouraged me to continue to insist, while the desire became more deeply rooted. Finally the answer arrived before the year ended: “We will expect you in Schoenstatt in July 2015!”

The period before the trip was intense… I had to finish my degree, work to earn money, organize for the trip…

Happily at the end of June, the great day of my departure arrived. Before my arrival in Germany, I made some stops through neighboring countries. But there was nothing more beautiful than to arrive in the land of my beloved MTA, to arrive at home on my birthday. The best gift and the most beautiful memory of my entire life was that the Blessed Mother welcomed me joyfully in her Shrine!

There were only five girls in the program, who, little by little began to integrate: two Mexicans and three Argentineans. From the beginning, there was much trust, and joy reigned in all the meetings and during the time we were together. Something that impressed me very much and which I loved about the program that I did not expect was that everything revolved around our Father and Founder’s life.

We made several trips following his footsteps through Germany, from Gymnich to Dachau concentration camp. Little by little, we deepened in his life through these trips and also through the testimony of so many people who knew him and those who did not know him, but who had a spiritual relationship with him.

I can say that this time in Schoenstatt was and always will be a milestone in my life. Thanks to all the people who made Schoenstatt known to me over so many years and who spoke to me about the Covenant of Love, Father Kentenich, and the Shrine. Today I can say that not only is everything true, but instead I experienced it. I lived Schoenstatt; I lived a little piece of heaven.

Nadya Cicconi, 24, Argentina: The happiness of being on the steps of the Shrine and Father’s tomb defies explanation 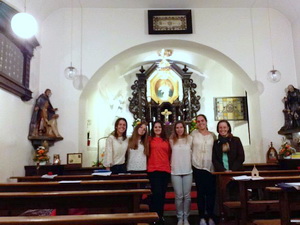 Everyone, who is a part of Schoenstatt, is united by the Blessed Mother in the Original Shrine. For this reason, I believe that we share the great desire to come on pilgrimage to this place. And when I had the opportunity, I did not hesitate. Obviously it was not easy, and I arrived with great uncertainty– to work in Germany and to live with the Sisters was an adventure unto itself.

Upon arrival, I no longer had doubts. The happiness of being on the steps of the Shrine and at Father’s tomb cannot be explained. And even more, to share this with girls from different places and with Sister María Carolina (Leader of Time in Schoenstatt) was a very enriching experience, which filled me with peace and joy. I am grateful to God that He guided me here, because I received countless blessings everyday.

Inés Lagos, 26, Argentina: My days began and ended in the Shrine

“Going to Schoenstatt for some months remains pending…” Upon hearing my words, her response was simply, “go.”

The program is well known in Argentina, and I always wanted to come, but when I arrived, I realized that I had no idea why I was here. Now what? I decided to enjoy each day and to allow the Blessed Mother to surprise me – and she did! Much more than I would have expected.

The greatest gift that I received was to celebrate the ten years of our Covenant of Love in the Original Shrine – the covenant that we had sealed in this same place. It is difficult for me to express with words the emotion that I felt that day of celebration.

Time in Schoenstatt is a two-month retreat, but it can be an experience that changes our lives if we allow the Blessed Mother to work this miracle of transformation.

My days began and ended in the Shrine and the only thing I can say is, “Thank You!” 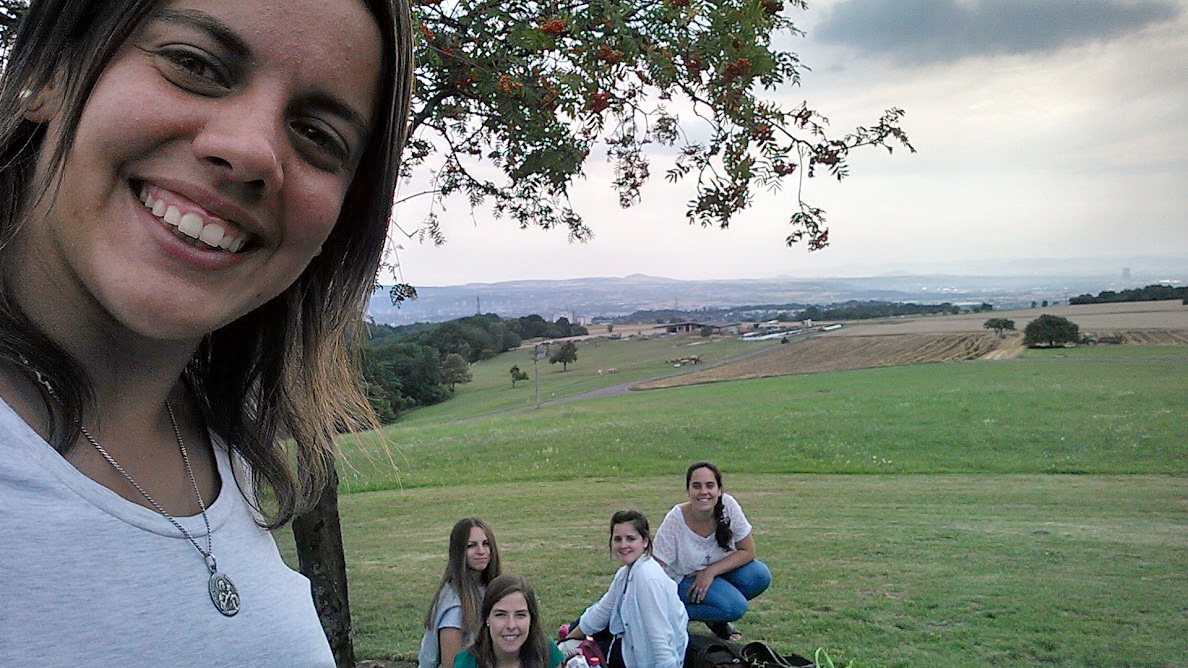