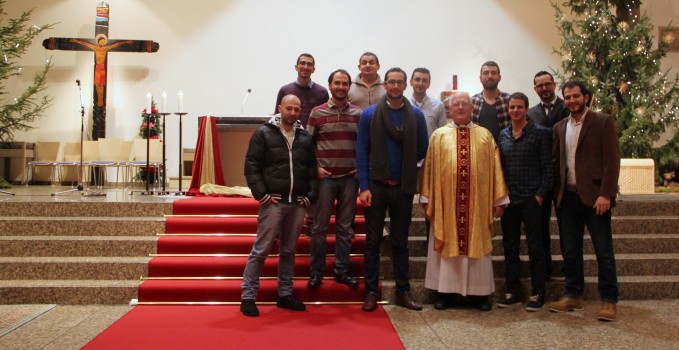 The Gospel of Mercy offers the Answer: Eleven Syrian and Afghan Refugees in Schoenstatt

It is a message that reached Fr Franz Widmaier long ago. In a conversation with schoenstatt.org on 21 August he said that he had felt like a lone voice calling in the desert whenever he spoke about migrants and refugees in Schoenstatt. “Then Pope Francis came along and one of the first things he did was to travel to Lampedusa. Since then he has spoken again and again about refugees, and that the Mediterranean may not be allowed to become a huge grave, and that we bear responsibility for these people.”

A brief pause, then, “That is why I appreciate Pope Francis so highly and rejoice that we have him as our Pope!”

A journey in the footsteps of St Paul – with consequences 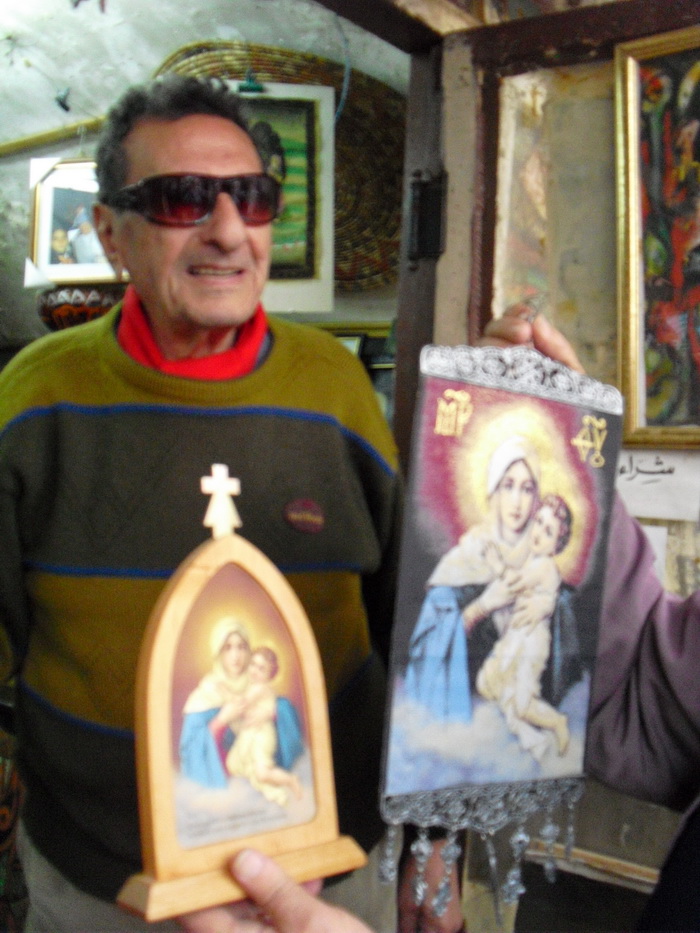 A journey with a group of pilgrims in the footsteps of St Paul over four years ago took Fr Widmaier for the first time to Syria. The media were full of reports on the civil war there, yet when we were there the pilgrims noticed nothing. “Wherever we came, it was peaceful”, Fr Widmaier continued. At that time no one spoke of the terrorism of IS. “This journey opened my heart for Syria!” Fr Widmaier said.

The discovery of the Mother Thrice Admirable of Schoenstatt in a Damascus bazaar!

Soon after this experience he invited the first young people from Syria to spend a time in Schoenstatt as volunteers – a decision that has proved to be more than providential today.

Many of the young men who spent some time in Schoenstatt now study in Germany, while some work in hospitals as doctors – and help again and again to translate for the refugees who have found somewhere to say in the former students’ quarters of the Schoenstatt Fathers close to the Original Shrine. Last Christmas they celebrated together with Fr Widmaier and young people from other countries in Schoenstatt.

There is already a house for refugees from Syria and Afghanistan

Refugees in Schoenstatt? For a long time it was no more than a desire of some Schoenstatters who felt addressed by Pope Francis’ challenge to go to the outskirts of society (or to draw the people on the peripheries into the centre), and in Advent 2014 it became really practical when Schoenstatt was asked to become a reception centre for refugees who needed a roof over their heads during the winter months. .. “Fr Zillekens offered the Covenant Home, and other houses also came into question, but in the end nothing came of these offers because of the fire regulations”, Fr Widmaier explained. Because of the arson attacks on refugee accommodation in a number of areas in Germany, he also considers the fire regulations a top priority.

However, when the former students’ residence of the Schoenstatt Fathers was offered to the Vallendar municipality, it was gladly accepted. So now where formerly young men prepared for the priesthood and their future work as Schoenstatt Fathers, eleven young men aged between 17-30 from Syria and Afghanistan have found a home. Before they moved in the house was given a thorough spring-cleaning by volunteers – Sisters of Mary, families, Ladies of Schoenstatt. “They scrubbed and cleaned like crazy”, he remarked. His voice revealed how deeply this had touched him. “The house was prepared with great love”. Lovingly. At a time when people are demonstrating against refugees and riots break out, and when there are intolerable conditions in some of the accommodation, a little house is lovingly prepared. “Schoenstatters also collected furniture, and made sure there was enough bed linen, tablecloths, crockery and cutlery, etc.”

With two plastic bags and nothing else

How do the refugees – a total of eleven young men, four Syrians and seven Afghans – communicate? “Some of the Syrians can speak a little English”, Fr Widmeier continued. Sometimes some former volunteers translate from Arabic. Language is one of Fr Widmaier’s biggest concerns. “One had been given the permission to stay, and he was terrified because he couldn’t understand what the document said. He didn’t know it contained good news!”

All are learning German. A Lady of Schoenstatt and two volunteers teach the young men German. “They want to learn, they want to be able to communicate, and they also want to work here; they don’t want to be a burden”, Fr Widmaier said. Just like the young Syrians who came here before them, and for whom Germany has long become their home, they don’t want to return to Syria – to the bombs, kidnappings, shells, constant fear. One told him, Fr Widmaier related, “My father doesn’t want to leave Syria. A few days ago a shell landed in his flat. His next-door neighbours are dead. My aunt only survived because she was at the other end of the room. But my father doesn’t want to leave. He closed the hole in the wall and stayed. I am very frightened of what could happen to him.”

After an appeal in the Pilgrims’ Church nine bikes arrived. Sr Marie Munz, who also looks after some refugees in the surrounding area, managed to persuade the police to teach the refugees the rule of the road. You have to learn how to ride a bike in Germany.

“What do you still need for the refugees?” I spontaneously asked. “Clothes, but good things, clean, jeans and T-shirts, the sort of things young people wear,” Fr Widmaier answered.

Then he told me that he had set up a hot spot so that the young men could communicate with their families in Syria or Afghanistan, or in the camps in Turkey. At the same time it provides automatic translation for his conversations with them via the smartphone translator. 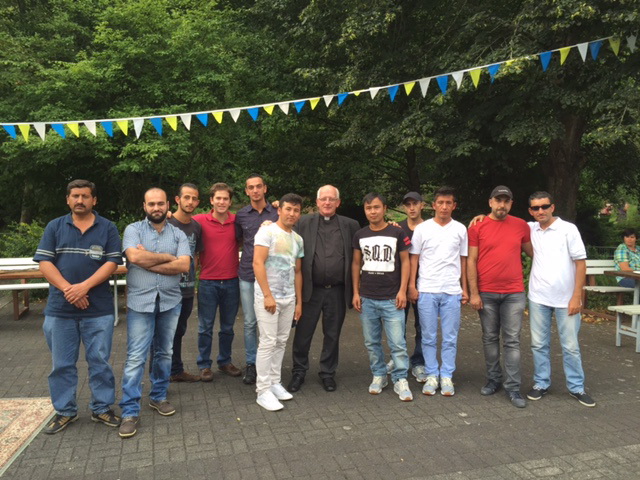 Photo of 23 August – Fr Widmaier with “his” refugees and volunteers. Photo by Jose Antonio Morfin

Because we love Jesus

Fr Widmaier knows how happy the young men are when he visits them. Their faces light up. “Their hospitality is amazing. They always offer you something when you arrive, tea and something they have cooked. It is very simple, but it is so important for them to offer something to a guest.”

He goes with them when they look for work, listens as far as possible, praises them because they keep the surroundings of the house so nice and sweep in front of the house. It is really impressive how tidy everything is.

“I like Jesus”, one of the young men said. “Is there a church service around here?” another asked on Sunday afternoon. “That was this morning in the Pilgrims’ Church”, he was told, “but this evening at six there is another one.” “That evening as I drove to the station to pick someone up, I saw him walking home from the Pilgrims’ Church. So he had attended Mass”, Fr Widmaier said. They asked him once why he and the other Schoenstatters do so much for them. “Because we love Jesus,” he answered. Sometimes it is so easy. “Our faith is not something to keep to myself, we have to proclaim Jesus. Pass him on.” Because we love Jesus. 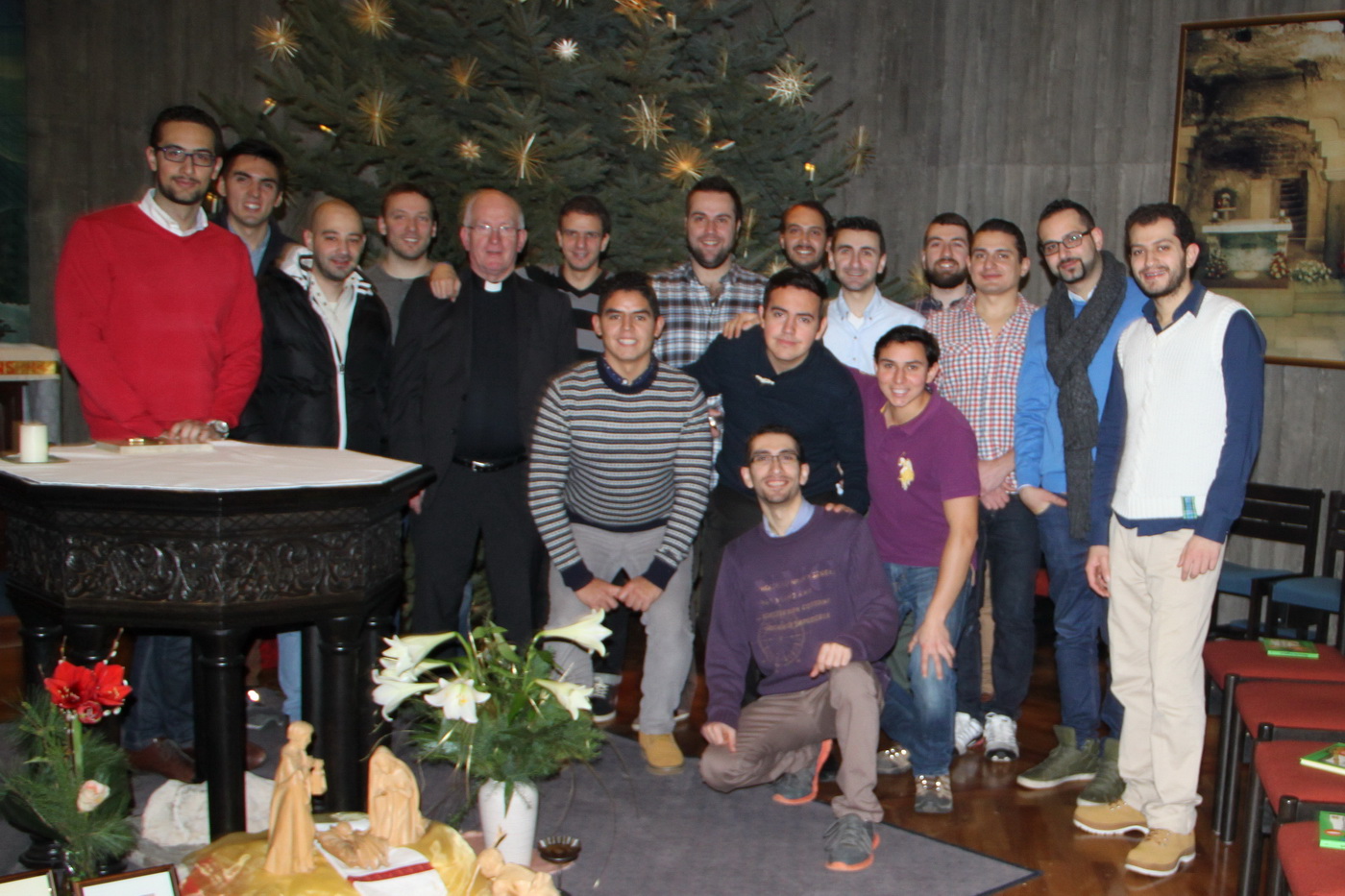