In Gratitude for the Pontificate of Benedict XVI 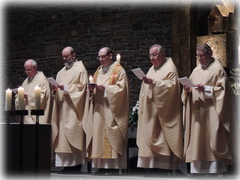 mev. During the last moments of Benedict XVI’s pontificate, a holy Mass in thanksgiving for his more than eight years of service, guidance and care that the Pope gave to the people of God, was celebrated in the Adoration Church at Schoenstatt.  The Episcopal Conference of Germany – as those of many countries – had summoned all dioceses and parishes to celebrate a Eucharist on this date, in thanksgiving for the Pontificate of Benedict XVI.

The celebration was very well attended, among those present were the civic authorities of the region:  the mayor of Vallendar and the delegate representing the Rhineland Palatinate.  Fr. Biberger, general director of the Schoenstatt Sisters of Mary who also presided at the Eucharist, gave them a special greeting.

Together we lived the last minutes 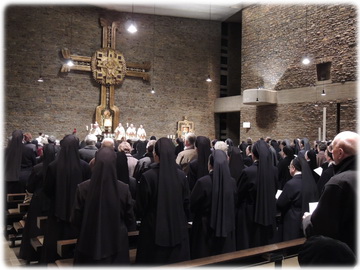 “We have come to celebrate our gratefulness in which we want to especially express our gratitude for all the good and positive that we have learned from him and to thank God for having given him to us as Shepherd of the Church,” said Fr. Biberger at the beginning of the Eucharist.

“We unite our prayers in petitioning strength for the Holy Father in these moments of farewell.  All of this is also something new for him.   May the Holy Spirit accompany him in this time of change.”

With respect and admiration 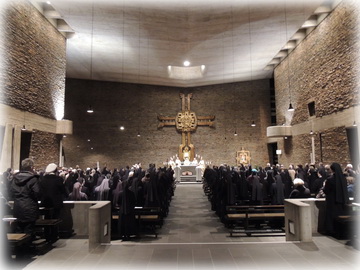 the atmosphere prevalent during the celebration as described by Fr. Biberger:  “We see with respect and admiration the step which the Holy Father has taken, and we are grateful for all he gave to the Church during these years.”

His legacy:  The Year of Faith 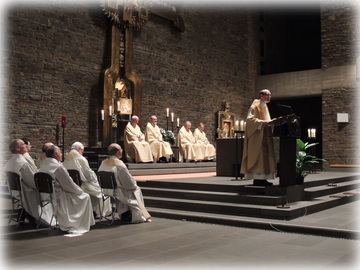 “In the midst of this Year of Faith, Benedict XVI presents his resignation leavinig us his legacy – so tu speak” Said Fr. Biberger towards the end of his homily.

Thus – from the Adoration Church in Schoenstatt – Benedict XVI was accompanied during the last minutes of his pontificate.