Posted On 7. December 2010 In Original Shrine

Two years since schoenstatt-tv was born 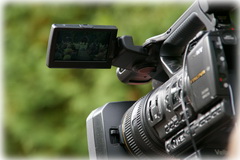 Agathe Hug. At Christmas it will be two years since schoenstatt-tv was born. A great deal has happened in these two years. At first there was only the wish to have what Fatima, for example, has had for a long time, that is, the possibility to visit the centre of the place of grace at any time via a Webcam. Many Schoenstatters all over the world are unable, or can no longer, visit the Original Shrine. All should nevertheless have a possibility “to pop in” to the Blessed Mother whenever they want.

Not a one-way road 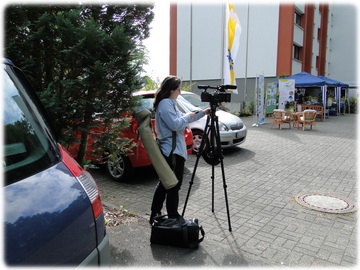 That was the extent of the original idea in our little human minds. Yet just a few days after the idea was born, it showed that heaven was following other ideas. Schoenstatt-tv was not to be a one-way road, nor was it to be a country road. Schoenstatt-tv was to become an airport, a hub, for a family-like exchange. The Schoenstatt Family all over the world was to be given the opportunity to share in the life at the place of origin. They were to be able to join in the celebrations and be present when something “important” was going on.

However, a message had not just to go out into the world from Schoenstatt, but the possibility had to be created to share celebrations, prayers and experiences from all over the world via this channel. This has become possible. So, if everything works out as planned, we should be present on 12 December when the shrine in Miami is blessed. The preparations have begun. When Fr Kentenich spoke about a return current many years ago, he had no idea that the Internet would exist. Yet we feel that he is reminding us of what he said. It seems that the actual goal heaven is aiming at with schoenstatt-tv is that Schoenstatt should increasingly become a family where local groups get to know about other groupings in the world and share life with them. 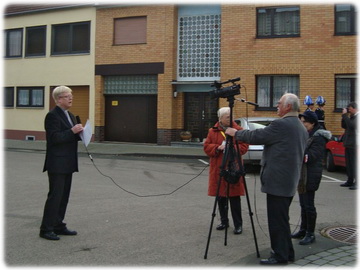 In order to be able to carry out the ideas of Divine Providence, a number of decisions had to be taken in the course of the last two years, and various steps undertaken, which could make one dizzy just to contemplate. The central problem was that in order to carry out such a service, even if the Internet is available, we needed a government broadcasting licence. Without it one is breaking the law – and that is not just expensive, it also gives rise to a great deal of trouble.

Such a licence is only granted if the corresponding structures exist so that there is no danger of the broadcaster going bankrupt in the first few weeks. At the same time certain conditions have to be fulfilled, such as for example, the existence of a programme commission (we are working on this), or the presence of a youth protection agency, etc.

The question now arises as to whether we should give up this service, or see to the provision of the required structures. We have decided on the latter course. So the first step has been to found a charitable limited liability company, as well as a charitable association to support the work. On this basis we were given a broadcasting licence on 1 July 2010 for Germany. 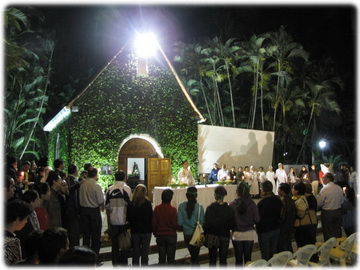 In the hope and faith that our Schoenstatt heaven – led by the Blessed Mother and our father and founder – is the driving force behind our attempts, we have tried as 2010 comes to a close to extend the possibilities of schoenstatt-tv, and to improve the quality. A video mixer has been bought so that a number of cameras and microphones can be used at once. However, if you have this possibility, you also have to have the cameras which can cope with being used for hours at a time. A generous Schoenstatter has made it possible for us to buy these cameras for a few thousand Euros, on condition that we repay the loan in the course of time, which is unfortunately impossible with prayers on their own, but only with Euros.

For the opening of the Triennial on 17 October we bought a screen to relocate the walls of the Original Shrine outside. As early as 1919, and in a practical sense in Autumn 1923, the people responsible for the Movement in Schoenstatt were of the opinion that the tiny shrine would have to be extended, because it is impossible for all who take part in a course, for instance, to find a place inside. Among others, the suggestion was made to remove the wall with the door and to incorporate the little shrine into a larger building, similar to the Potiuncula chapel of St Francis. This didn’t happen, because the “Bundesheim” (Movement House) had first to be financed and built. Today we are able to extend the Original Shrine by using a screen before the entrance and broadcast the event on the Internet.

In the time to come 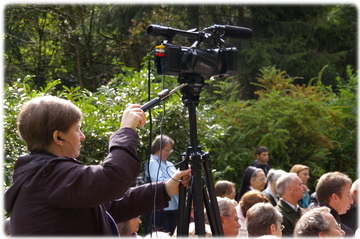 A few of our audience have left us again in the course of the year. Their reason was that they didn’t want to see only church services, but also, for example, talks given about Schoenstatt’s spirituality, or to see and hear news.

We would also like this, but, first of all, this requires time, secondly a studio, thirdly people who prepare and present these talks and news flashes, and fourthly, quite considerable efforts to provide the financial means to do it. At the present moment we are not yet in a position to achieve all this. Above all we lack the necessary “small change”. We can only offer what we are able to do financially, or what generous people make possible for us.

So, although we have the prospect of two rooms for a studio, but we can only furnish them when the necessary money is available. We would have enough people to do the work, but we are unable at present to pay them. We depend on voluntary helpers. We would be able to improve many things technically and offer many services (for example, the possibility to provide DVD recordings of broadcast programmes), but we don’t have the money to buy a computer to do this, nor can we cover the cost of the necessary Internet capacity. Perhaps someone may feel encouraged to support us in this regard? 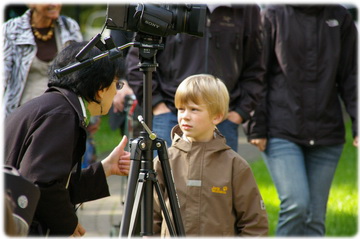