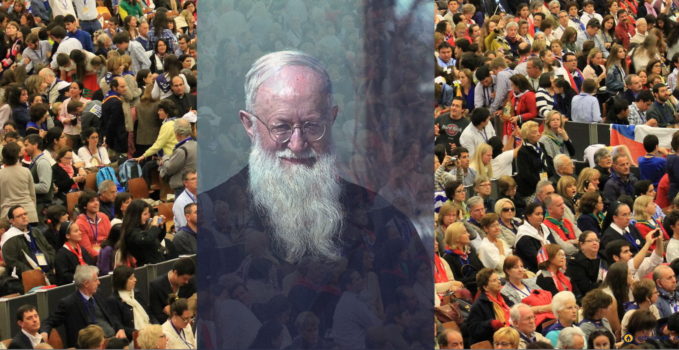 Letter of the General Presidency – Pentecost 2017

Fr P. Juan Pablo Catoggio asked schoenstatt.org`s editorial staff to help spread his letter, written in the name of the General Presidency, proclaiming a “Father Kentenich Year” in preparation of the 50th anniversary of his death. The idea is to share this letter, at Pentecost, with the entire Schoenstatt Family.

Already on Friday, June 2, all National Presidencies and Centrals of the Schoenstatt Movement received the letter.

We publish here the official english translation of the letter, that is also available in Spanish and German.

The members of the General Presidium send you heartfelt greetings from Schönstatt on the feast of Pentecost. Here, at the place of grace and of our origin, we implore for you all over the world the gifts of the Holy Spirit on the occasion of his feast.

Let us focus on our father and founder for one year: on his thinking and message, on his interesting and varied biography, and on the answers he has given to the challenges of the Church and the world and still wants to give through us today. This year gives us the opportunity to deepen our relationship with Father Kentenich, so that his charism can be reawakened in us. Let us invite many people to meet Father Joseph Kentenich for the first time or to rediscover him as a prophet of our time!

Pope Saint John Paul II. drew our attention to our responsibility: “You are called to participate in the grace that your Founder has received, and to offer it to the whole Church. For the charism of the founders proves to be an experience worked by the Spirit and handed over to their disciples to live accordingly, to guard, to deepen and to develop it constantly, and to do so in community, and for the good of the Church. ” (September 20, 1985)

50 years after Father Kentenich returned to the Father’s house, we are called as ”post-founder” generation to keep his “founding spirit” alive and up-to-date, to place ourselves anew on the foundation he laid, and from there to answer to the present challenges, to be “co-founders” with him. Father Kentenich’s fruitfulness should become visible in us and in our service to the Church and world, in a “Schoenstatt on the move”.

We invite all members and friends of our movement worldwide to celebrate this Father Kentenich Year at the shrines in their countries and individually. We encourage you to come together on September 15, 2017, and to open the Father Kentenich Year in a spirit of solidarity with our worldwide movement and with our father and founder, in a way that is appropriate for you.

On Saturday, September 15, 2018, in the various shrines and cathedrals in our countries, we as Schoenstatt Family want to say to Father Kentenich: Yes, here we are, we go with you! And we want to promise the Church to collaborate in her mission in the spirit of our father and founder.

In the name of the General Presidium, I greet you all, wherever you live, very warmly from the Original Shrine. United in the Covenant of Love,