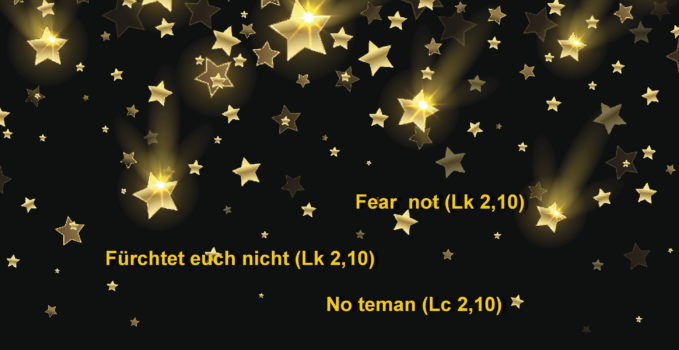 A black title page with a photo of the Brandenburg Gate in Berlin, illuminated in the national colours of Germany at the centre: this is how the “Berliner Morgenpost”, Berlin`s biggest and most reputable newspaper,  appeared on December 21, two days after the terrorist attack in Berlin.  Under the picture, in large white letters are the words:

Do not be afraid!

Gospel according to Luke Chapter 2 Verse 10 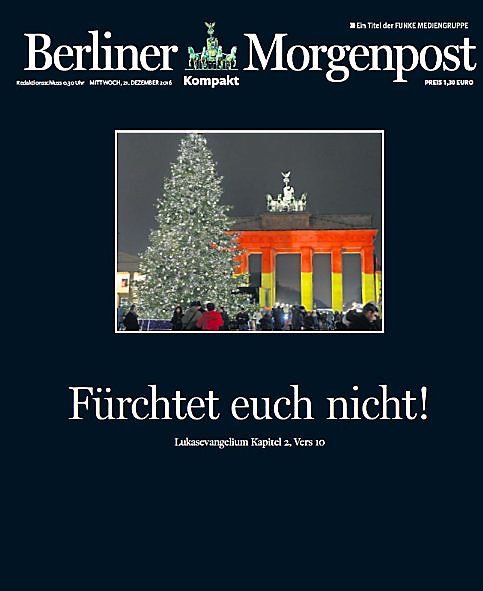 When a truck ploughed into the middle of pre-Christmas activity and atmosphere, killing 12 people and leaving over 50 injured, when this truck destroyed our Christmastime-induced feeling of safety as it did to the lighted stalls at the Christmas market, then politicians, journalists and priests are hard-pressed to find the right words that the frightened people expect of them, especially when they are vulnerable to hateful slogans.

When Aleppo is reduced to rubble and tens of thousands of people do not know there where to flee, when Venezuela is starving to death and when the man who is about to become the most powerful man in the world announces a return to the nuclear race on Twitter, when an entire football team dies because the airline wanted to save fuel and the bloody wars in the Congo is no longer reported in the media because of the sheer number of other disasters, then one no longer finds words and the sea of cheesy online Christmas greetings that are shared a thousand times become annoying.

The journalists from the Berliner Morgenpost – certainly not a religious medium – resort to a phrase that is 2,000 years old, the words the angels proclaimed to the shepherds in the field of Bethlehem. Do not be afraid.

Perhaps in the avalanche of well-meaning words but worn out by their excessive use, only THE word remains. THE WORD that became flesh and dwelt among us and still lives among us in this world and not a parallel idyllic world. The word, Jesus Christ, the Child of Bethlehem, the only reason that can tell the world and every person: Do not be afraid. That is the joy of the Gospel, here and now, and in the real world.

The message of the Christmas story

The day after the terrorist attack in Berlin Jasper von Altenbockum, the editor responsible for domestic affairs for Frankfurter Allgemeine Zeitung wrote the following comment:

The Christmas markets — with all their glitziness and trade — spread a feeling of joy that comes from a parallel world, contrary to the terrorist war declared against the West with this kind of attack. Haven’t they done it already? Should we now, in the days till Christmas, place a few stubborn lights on the Christmas tree against assassination, death and terrorist darkness? It was right to cancel only a few important events after the recent terrorist attacks, but for the rest, we should not lose our peace. Fear has already taken hold of France. Germany will not be any different.

Can anyone simply say Merry Christmas? After the attack of Berlin it is hard, it is impossible for many. What gives consolation at such a time may no longer be the Christmas market, but rather the message of the Christmas story. 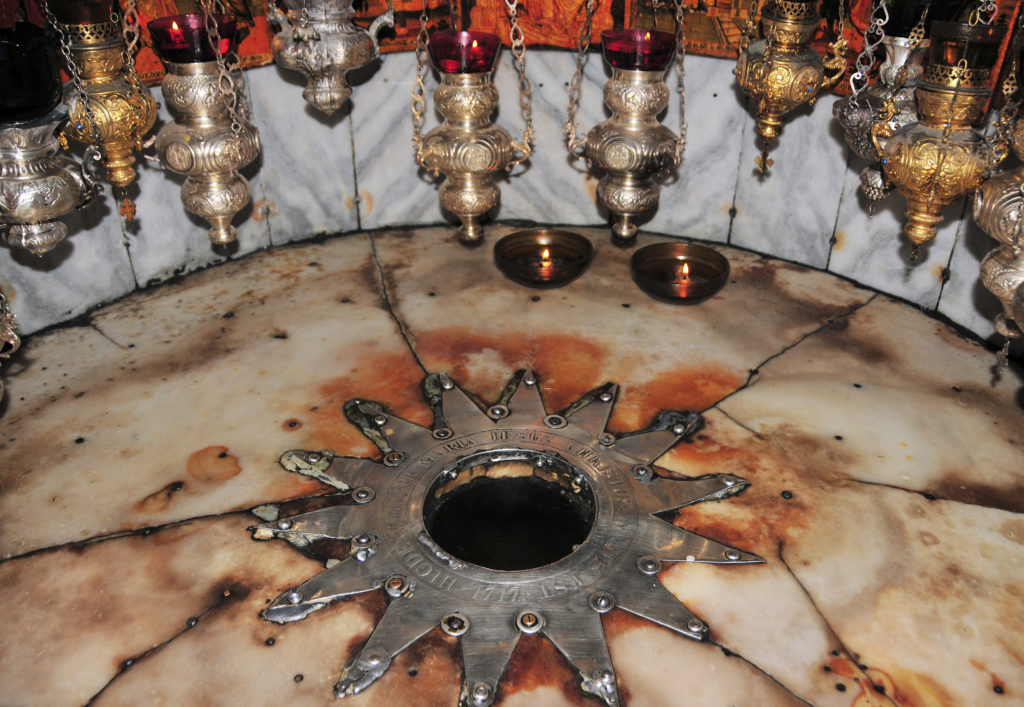 In those days Caesar Augustus issued a decree that a census should be taken of the entire Roman world.

2 (This was the first census that took place while[a] Quirinius was governor of Syria.)

3 And everyone went to their own town to register.

4 So Joseph also went up from the town of Nazareth in Galilee to Judea, to Bethlehem the town of David, because he belonged to the house and line of David.

5 He went there to register with Mary, who was pledged to be married to him and was expecting a child.

6 While they were there, the time came for the baby to be born, 7 and she gave birth to her firstborn, a son. She wrapped him in cloths and placed him in a manger, because there was no guest room available for them.

8 And there were shepherds living out in the fields nearby, keeping watch over their flocks at night.

10 But the angel said to them, “Do not be afraid. I bring you good news that will cause great joy for all the people.

11 Today in the town of David a Savior has been born to you; he is the Messiah, the Lord.

12 This will be a sign to you: You will find a baby wrapped in cloths and lying in a manger.”

13 Suddenly a great company of the heavenly host appeared with the angel, praising God and saying,

14 “Glory to God in the highest heaven, and on earth peace to those on whom his favor rests.”

15 When the angels had left them and gone into heaven, the shepherds said to one another, “Let’s go to Bethlehem and see this thing that has happened, which the Lord has told us about.”

16 So they hurried off and found Mary and Joseph, and the baby, who was lying in the manger.

17 When they had seen him, they spread the word concerning what had been told them about this child,

18 and all who heard it were amazed at what the shepherds said to them.

19 But Mary treasured up all these things and pondered them in her heart.

20 The shepherds returned, glorifying and praising God for all the things they had heard and seen, which were just as they had been told.