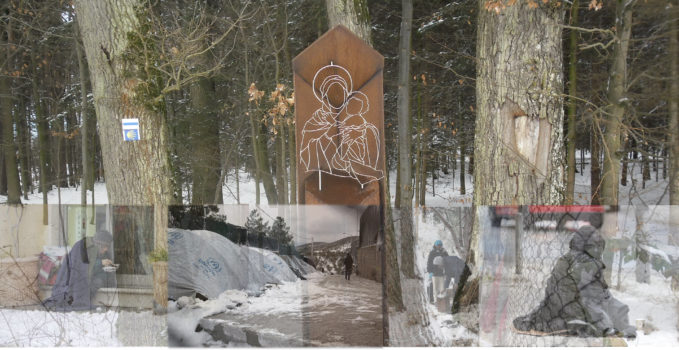 Posted On 2017-01-27 In Covenant solidarity, Francis - Initiatives and Gestures

“In these very cold days, I think of and invite you to think of all of the people who live on the streets…”

In these very cold days, I think of and invite you to think of all of the people who live on the streets, suffering the cold and oftentimes indifference. Unfortunately, some have not survived. We pray for them and we ask the Lord to warm our hearts so that we may be able to help them. (Pope Francis, Angelus, Sunday 8 January 2017)

“For January, we start with this,” shares Silvia Losada from Tucumán.  Just two days after the decision by the schoenstatt.org team to take up Pope Francis’ initiative to change the decades-old tradition of the Holy Father’s two monthly prayer intentions (decided long in advance), replacing this with a “long-term” intention and a last minute intention. Current. Urgent. An intention in the pulse of time, as Fr. Kentenich would say.  The media and church reaction was poor.  For many, this 80-year old pope is far is too spontaneous (or current or with a hand on the pulse of time), but — like very few — understands both the challenges and evangelising opportunities of the digital age, with its speed and communication reach.

Tucumán took the lead – and the Capital of Grace will be taken to the Original Shrine and the shrines in Madrid, Monterrey and Bamberg 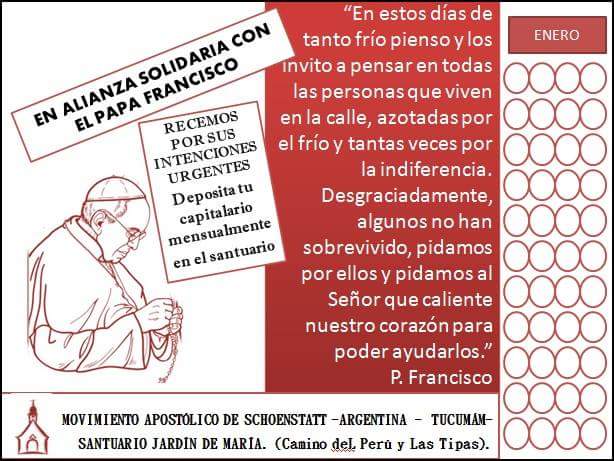 Shortly after the announcement of January’s last minute intention, Silvia Losada from the schoenstatt.org team said: “I have already shared this with all my groups and WhatsApp contacts. I ofter to take the contributions to the Capital of Grace to the shrine every month, but I want to speak to the Pastoral team at the shrine to coordinate it.” Two days later, the commitment expanded: “Based on what I had been sharing, the Garden of Mary Shrine in Tucumán, Argentina has united itself to the initiative! Lilian and Antonio Haskour from the pastoral team for the shrine will be responsible. They had already collaborated in spreading the word when we were praying in covenant solidarity with the shrines of the world. We are looking at how we can spread the message and encourage people to bring their contributions to the Capital of Grace so that we can take it to the Shrine every month.”

They designed a very simple Capital of Grace form that is already being shared as inspiration for others.

Renate Siebenkäs from the Diocese of Bamberg (Germany) really like the idea.  She is still looking for inspirations for contributions to the Capital of Grace for homeless people who die of cold on the streets of Europe’s big cities, in the tents given to the stranded refugees on the Island of Lesbos or in front of the fences in the Balkans.  But she was the one who gave us the image, the icon for this month’s intention and the Capital of Grace in covenant solidarity with the Pope and people exposed to the elements of the European winter. We are talking about the photograph above, we’re talking about Mother in the snow.

Mother in the snow 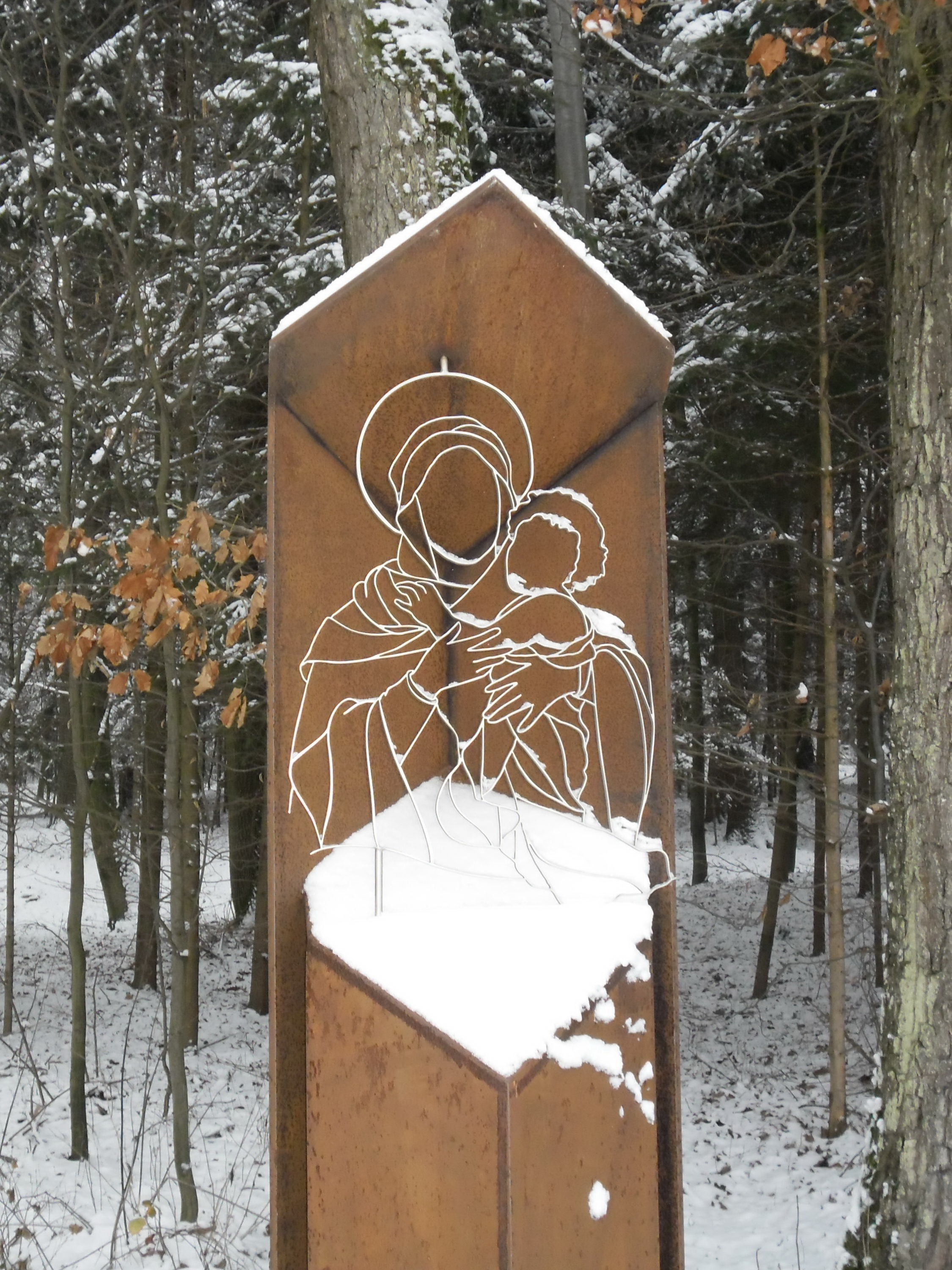 The image of the Blessed Mother, covered in snow. The Virgin Mary — homeless, without an umbrella, without a home, in the snow with wind and negative temperatures. Windswept. An icon of solidarity with the people that the Holy Father wants us to look at: men, women, young people, children and babies (yes, babies) in Rome, in Cologne (some 500-600 people live on the streets in the city of the Magi and Carnival), in Madrid, Berlin, Paris, Budapest…People who lost their homes for so many different reasons.

I have a beautiful, warm and safe apartment. Only my car lives on the street because I don’t have a garage. The other day, I had an early-morning meeting in another town.  I went out to clear the snow and ice and snow from my car. The thermometer read -10°C and after twenty minutes I was freezing, even though I was wearing a jacket. Then I noticed that my battery had died with the cold and another part of my car was also damaged. While I was calling the mechanic (and hiring a car so I would be on time for my meeting), the service agent commented: “Well, if your car is out on the street with these temperatures, you have to expect serious damage…” Half an hour out in the cold suddenly became a contribution to the Capital of Grace for the people Pope Francis had asked us to pray for…and every minute I’m out in the cold.

A few months ago, a friend gave me an umbrella with the words: I wanted to save the world, but it rained.  I do save the world, when I go out in the rain and snow (I hate it, to be honest) by offering it up to the Capital of Grace. This is the “plus” we gain from our charism in praying with the Pope’s intention “on the pulse of time.”

The Pope’s timely intention also makes us think.  What practical things do we do in Schoenstatt for people who live on the street? I remember Project “Encounter” in Madrid.

What does Project Encounter mean?

Project Encounter is an exercise to make the problems that surround me my own and to build a better world with my witness that can affect others and welcome everyone. It is to walk through the streets with new feet, look with new eyes, embrace with new arms. Listen without judging, talk without lamenting and accompany without imposing. It is to be aware that we have to be an answer to the world of today that is hurting and lacking direction.

We cannot lock ourselves in our homes. It is time to go out and help our brothers in need.

For several years already, they have been going out — Schoenstatters and people of goodwill — to hand out food, basic necessities, clothes and blankets. On 23 December they handed out backpacks with candy, biscuits, tinned food, bread, cold meats, a cold drink and a gift….

A few days ago, Mercedes Bonorino sent the missionaries who had just sent photographs of their wayside shrines for the Mosaic for the Pilgrim Mother in Belmonte, an email with a photograph of the Blessed Mother in the snow.  She wrote:

“I send you this photo as a small gift: a very beautiful testimony of the echoes of grace being generated by this current of wayside shrines united to the Blessed Mother’s mission from Rome, to reach the widest circles of the Church and the world. A lady from southern Germany who got to know Schoenstatt two years ago through the newsletter and schoenstatt.org fell in love with this mission, she feels that she is totally a part of the Pozzobon Room in Belmonte.  In the spirit of Pozzobon, she visits this wayside shrine near Bamberg, the photo of which I loaded to the page a few months ago. Yesterday she visited it when the temperature was -15°C, a true disciple of Joao Pozzobon in the snow, in much the same way as he walked with the blazing sun overhead…”

It is not just the people who suffer the cold for not having a home.  Some suffer the blazing sun, torrential rain and deplorable sanitation conditions…We built houses for some of them, these 100 solidarity houses, which are nearly reaching the 200 mark.  Each contribution to these houses, be it donations, construction, logistics, articles, translations is a contribution to the Capital of Grace for the Pope’s intentions.

About 75 students set out on 16 January on pilgrimage to the holy places of St. Jose Gabriel Brochero, offering up prayers and taking everyone’s intentions with them. Pope Francis’ intention was among them. On the pulse of time, in covenant solidarity. Do we want to save the world, even if it’s raining?

Mercy renews and redeems because it is the meeting of two hearts: the heart of God who comes to meet the human heart. The latter is warmed and healed by the former. Our hearts of stone become hearts of flesh (cf. Ezek 36:26) capable of love despite our sinfulness. I come to realize that I am truly a “new creation” (Gal 6:15): I am loved, therefore I exist; I am forgiven, therefore I am reborn; I have been shown mercy, therefore I have become a vessel of mercy..