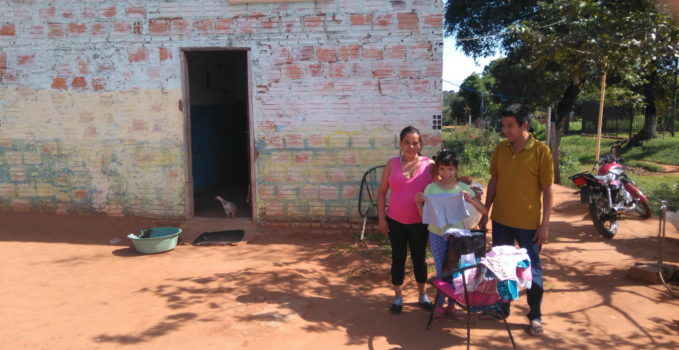 “I want to build this house now, because it is cold…” There are already 175 “100 houses of solidarity”

“Do we have donations for one more house?” Ani Souberlich asked me several weeks ago. “I already asked for the material, it is for one of our families that I promised a roof, and with last week’s rain, they had some misfortune, and they are now practically living under a tree. I would like to help them now…and I want to build this house because it is cold. I will tell you more later!” Two or three days before, the first donation from Italy for an entire house had arrived. Along with other small donations from Switzerland, Spain and Germany, the next remittance became “two houses of solidarity” before it gets cold…Now in October, during the Paraguayan spring, there are two more houses for two more families, who receive much more than a roof; they receive a future, hope, and they experience attachments of solidarity.

Flashback: 3 May 2016. “The first visit to three of the ‘100 houses’, in 2015, changed my life. I was always in solidarity with this mad project that I always felt as mine, I always committed myself and it always fascinated me that we were creating something of the 100 years Jubilee of the Covenant of Love that would last. It is a real and permanent expression of Covenant Solidarity with Francis. It is a work worthy of a Schoenstatt reaching out, a Schoenstatt of the second century,” I commented to Ani, as we proceeded in her brave, white vehicle through Asentamiento Esperanza’s (a slum at the periphery of Gran Asunción) streets, here all the 100 houses of solidarity madness began three years ago.

“But it is something different to be there, to see, to feel that other, that ‘poor’ person is like me and he lives in a dump under four poles and a bag,” she answers me and she is right. 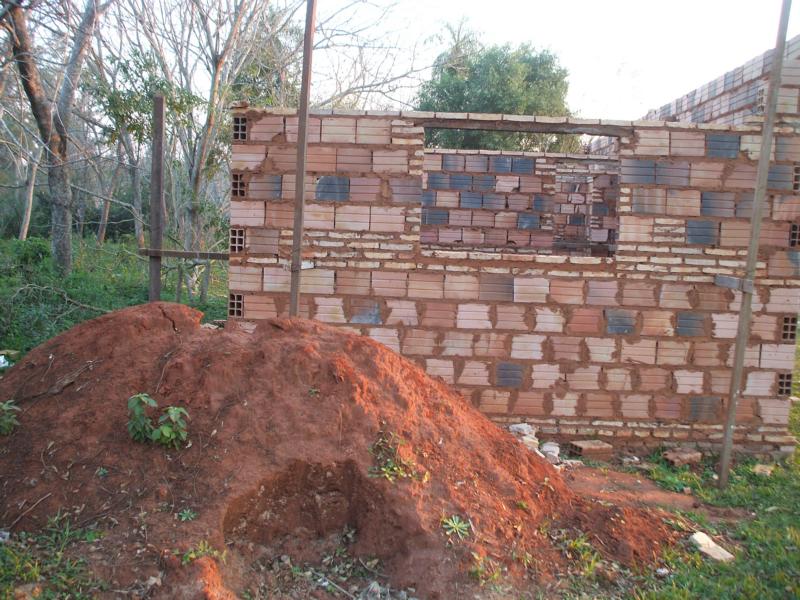 Building the house donated from Italy

To see our friends again

More than a year had passed since that first visit to the 100 houses of solidarity. However, once we returned to the house where Porfirio lives with his mother and his three handicapped and bedridden siblings, that entire year seemed to disappear. Even more when after arriving to his house and waiting a while with the mother, who had recently returned from the hospital, and with a neighbor who helps her a little, Porfirio appeared on his new motor bike. We hugged like friends, like siblings forever. The first thing he told me after the long and strong hug was:  “Please, Maria, tell Mrs. Susana a thousand thanks for giving us the refrigerator and the washer. Tell her that I always pray for her.”

We chatted with Porfirio about his work and his creativity of generating a bit more income by managing lots for sale. This young man, around 20 years old, is responsible for providing for his family, and he does it with an impressive simplicity and joy. Did we go to give him something? Of course, clothes, food and our time…But what we received was so much more. It was like a 45-minute spiritual retreat on a bench in front of his humble house, one of the 100 houses of solidarity, under an autumn sun and a hut made of poles and plastic in view…

This time, we had an entire day for visits, but just the same, we had to say farewell… The distances are great and the roads are an adventure… 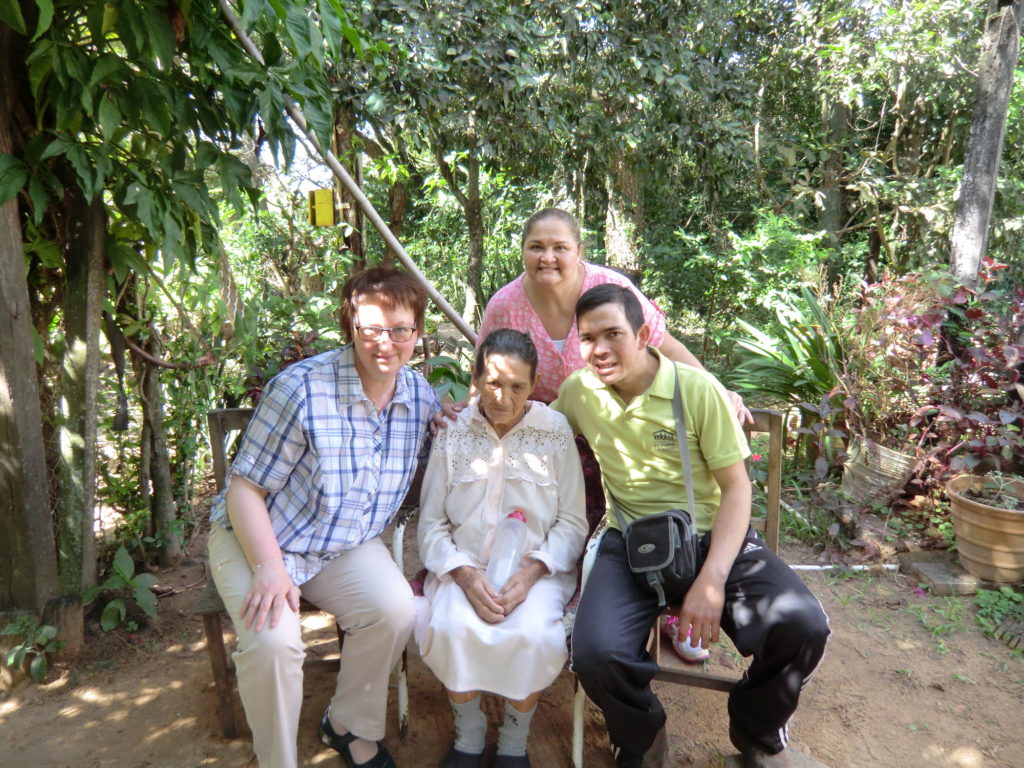 In Porfirio and his family’s garden

A coloring book, a pencil, a hug…a roof

We left a WhatsApp message for a family that was not at home; we told them we would come later, and then we went to Asentamiento Esperanza. While the first 100 houses were built on land that was requested and received one by one by the families, the new houses are now built for families who received land from the State in one of the settlements, but nothing more… As we got out of the vehicle, in just a few seconds, we were surrounded by at least thirty children.  Children’s faces radiant with joy, smiles and shiny eyes… We distributed some drawing booklets and pencils and a candy to each one, and they danced with joy.  They hugged us and shouted happily.  “I always tell them several days before that I will come,” Ani commented, “but I do not give them an exact date. I want to see how the houses are, how well they take care of them.” 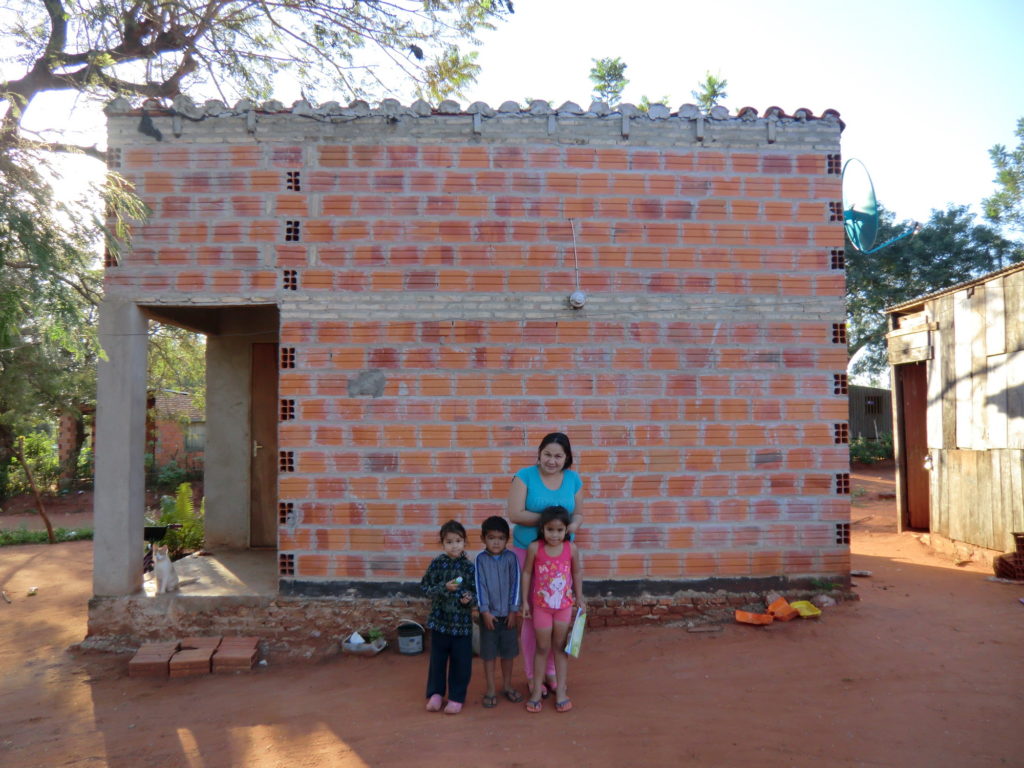 Ani Souberlich has developed a complete system during these three years that we have built houses of solidarity for the poorest. It is a world of attachments, of education, and of motivation. Every family receives a visit at least once, sometimes two or three time a year. Ani takes them clothes, food, coloring books, pencils and toys for the children. She asks about their health, school, and work, and in passing she looks at the order and cleanliness of the house. In Isabela’s case, we discovered tremendous chaos inside the house. There are some serious words, a smile, encouragement, a hug, a photo with the children and the friend from Germany. “We will see you soon, Isabela, and take care of your little house.” We go to greet the owner of the neighboring house. She and her husband built it on their own; they are in slightly better condition.  The husband studies architecture in Asunción and works at night. She runs a simple kiosk in the settlement: crushed ice, candy, bottled water…  They have plans, hope, and a future… We drink mate [herbal tea], we chat, we leave some food…

When we returned to the house where no one had been at home some hours earlier, Yasmin and her daughter were now waiting for us. Their joy with their house and how they cared for it was noticeable. They even had plants by the front door. 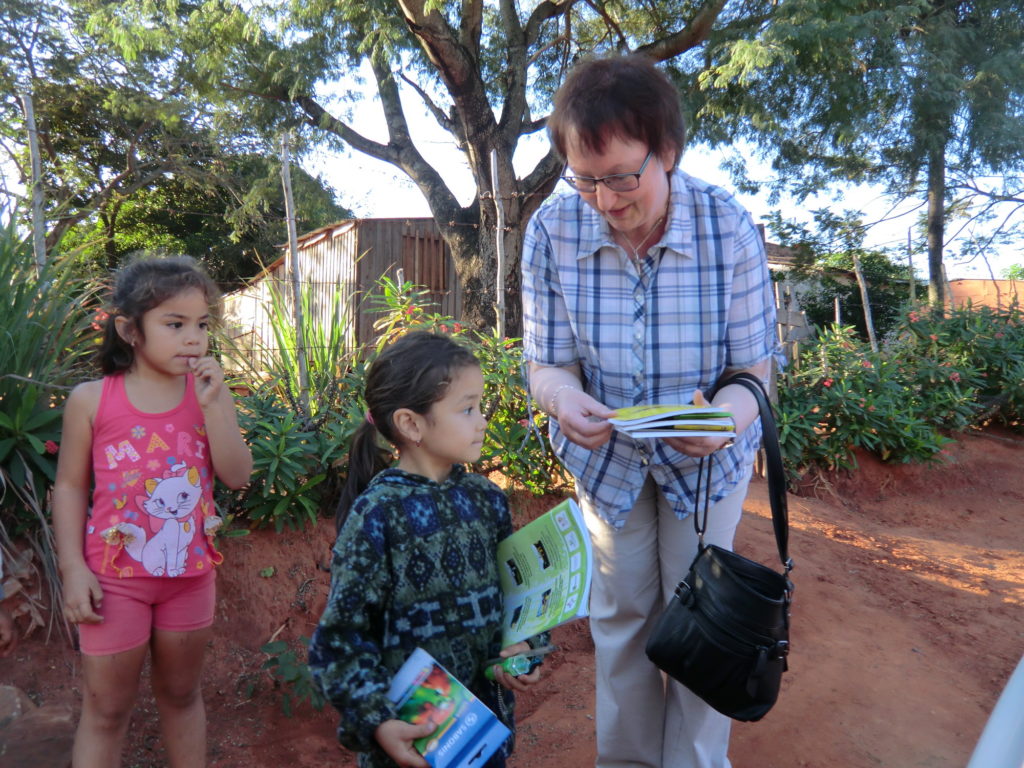 The tour ends with a visit to my small friend Luz, this timid little girl, with difficulties with her arms and legs, and so many surgeries and physical therapy.  Everything made possible with so much solidarity… this little girl with a smile that is worth gold.  She proudly showed us her puppy that she carefully and affectionately tends.  “How is it going at school?” Ani asks.  “Good, I love it.” She is progressing nicely, her mother, who is pregnant, comments. Her Spanish is poor and my Guarani zero, but eyes and hands know how to talk.  “We are going to have a baby soon,” Luz tells me. Her face is pure joy. Ani gives her some pink clothes, like all the world’s little girls fancy.  What happiness! 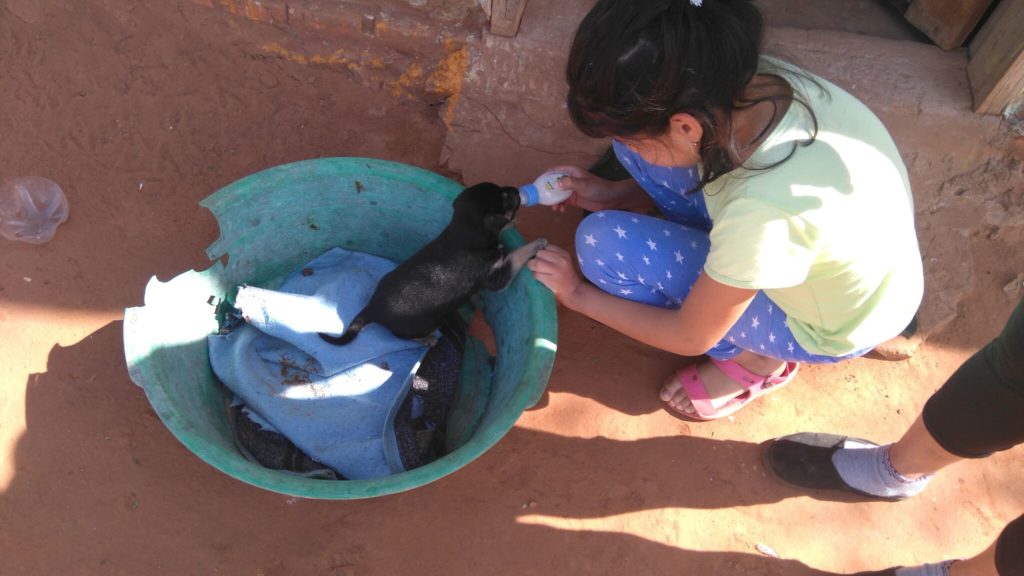 I thank little Luz for the beautiful sponge flower and the little letter with her greeting that she sent to me through Ani.  “I have it in my home, and every day I see it and think about you,” I tell her.  Her response– a big smile.

We took the last photo of the day, this small family of three, soon to be four, in front of the house of solidarity that is so carefully and beautifully painted. 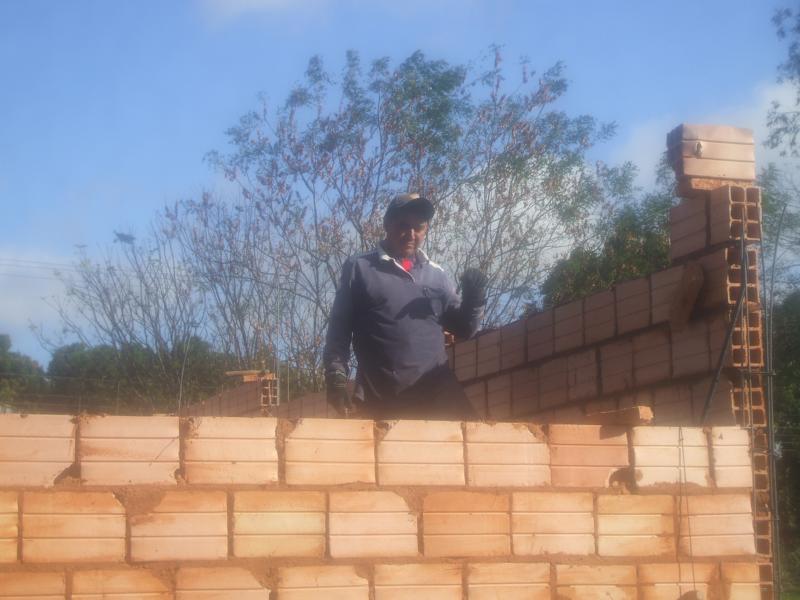 Meanwhile, several more houses were built. Our work of mercy has concrete names and faces. Yet, returning to the initial idea – there are still many Schoenstatt Shrines without a house of solidarity.

In August, Ani sent me a photo that says everything we desire– a man happily building the wall of his future house or the house of his future…. 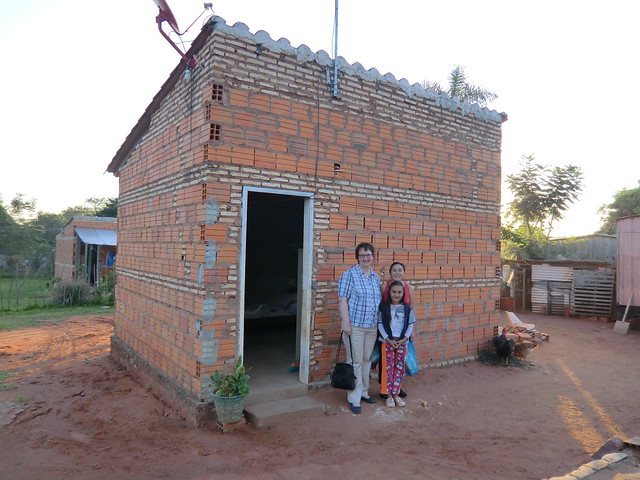 TRANSFER TO ACCOUNT FOR DONATIONS (SEPA) – Option for donations from Europe