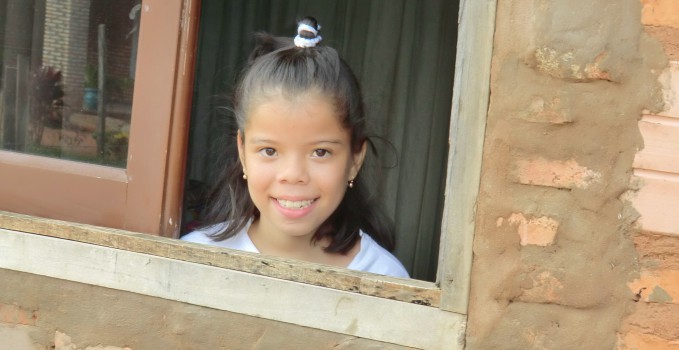 We were almost leaving, bidding farewell once again to this young and a struggling mother, who can barely speak Spanish, but at least she understands our language better than we understand her Guaraní. We understood the pride and gratitude of her gestures when she showed us her garden, her plants, and above all her little house, which is very small but clean and painted a light turquoise. While her daughter, Luz, a timid little girl, with difficulty moving her hands and feet, simply smiled and looked at us with her large eyes. Ani had taken clothes, food and some candies. We went to Ani’s small car to continue on, and at that moment, something happened that made all the efforts of the last two years worthwhile. From the window of the house, little Luz looked at us with such a joyful and happy smile that we had to stop, smile, and cry…

We were under the Paraguayan sun, at a place outside of Asunción, after driving several kilometers over dirt roads. This small family’s house is one of the 100 houses of solidarity that are a visible expression of our covenant solidarity with Pope Francis, our Jubilee gift from schoenstatt.org. 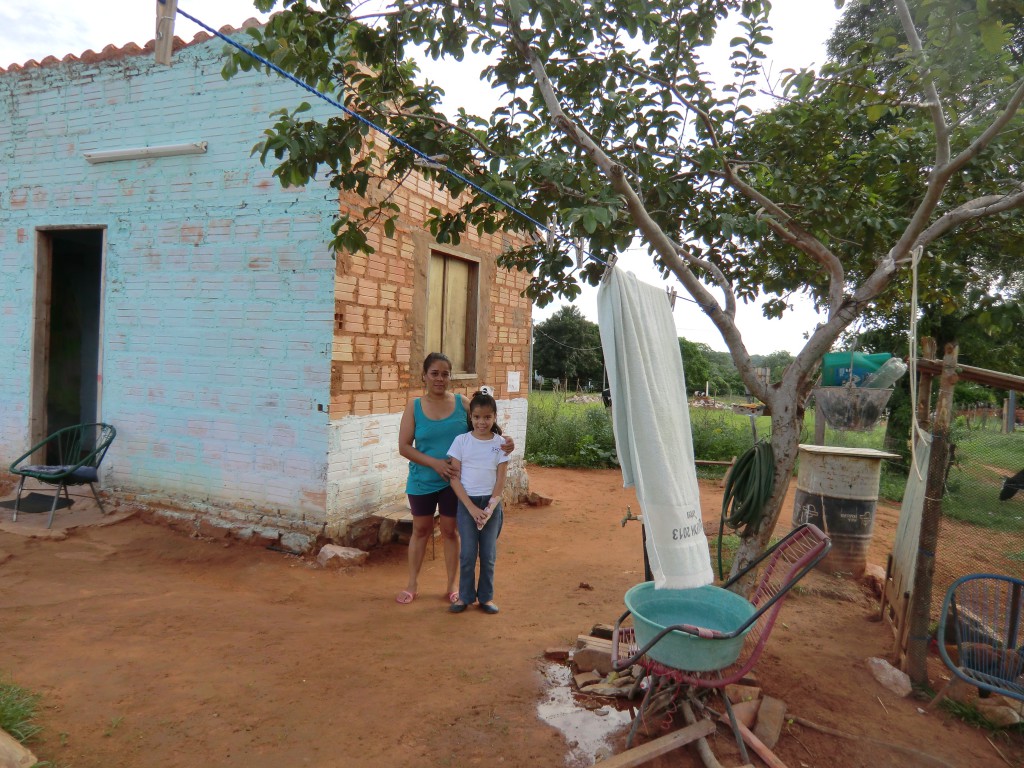 100 houses for the Lord’s favorites

At the moment we could not recall which of the Shrines donated this house, but we do remember something that Father José María, the great promoter of the project 100 houses, expressed:

“One hundred years ago, the Most Holy Virgin gave us a small abandoned chapel in the heart of Germany, a shrine that would become the home of our international Schoenstatt Family. Every family needs and has the right to have a home. This is how this initiative emerged, these 100 homes for the Lord’ favorites, his poorest children, from whom we learn to live the Gospel every day, just as Holy Father Francis shows us with his words and gestures.”

Just then, we were with the Lord’s favorite ones, we were in the midst of what resulted from the Jubilee, we were living that creative force of covenant solidarity, and we were touching it with our hands and feet. Our small friend, Luz, continues to smile from the window of her house; she has had a problem with her hands and feet since she was very small. She cannot walk well, and she cannot use her hands. On October 18, 2014, when Ani Souberlich’s team took clothes and food to the families of the 100 houses, to celebrate the Jubilee with them, Luz’ mother asked Ani if she knew how to find some physical therapy for her daughter, and then the surgery that was so necessary for a cure. The operation would be useless without physical therapy. Ani was able to organize the surgery, she found a physical therapist, and two weeks after this visit, she relates; “Our little girl, Luz is already going for her 10th session for her arm, and it seems that she still needs five more. She was supposed to go to the doctor the following week. But the happy thing is that she can already move her little hand.” 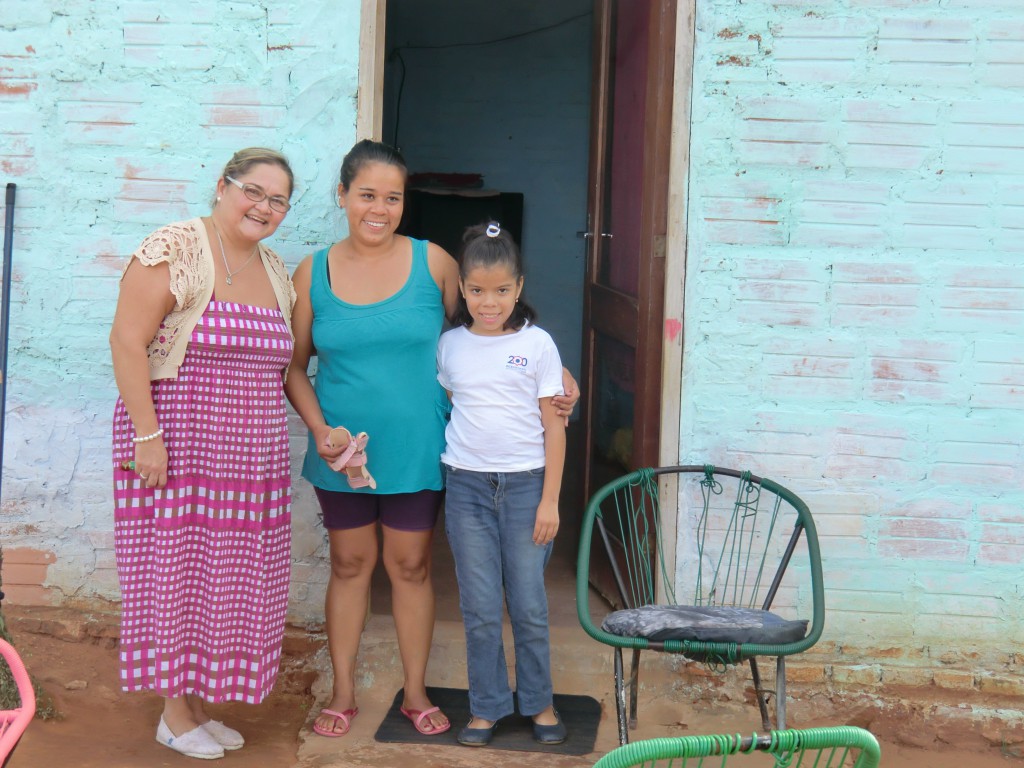 It took almost thirty minutes of travel to the next house. The houses are not built by taking possession of the land; this is the reason they are not together. There is truly a network of solidarity behind this, not only with donations; but rather, also in the area of construction: people with good connections in the city to obtain the building permits on some land, people with business contacts to receive donations of material, people who know people who can help with construction and much more. There is also a good selection of families. “I want them to be families with a future, where the house can truly be the beginning of a good development. It breaks my heart when I see the pain of children with both parents who are alcoholics, but it would not help to build a house for them because they would sell it for alcohol,” Ani related.

We arrived at the next house on roads of pure adventure; it was a much larger house than the previous one. A mother with five adolescent children lives here. Three of them are handicapped, confined to a bed. The other two sons take turns working, week by week, so that one is always at home to feed them, bathe them, change their diapers, and wash the clothes. “They are my brothers,” said the one who was at home when we arrived. He is a boy perhaps about 17 years old, who repeats: “They are my brothers.” He said it with an authentic smile. Along with his mother, they show us the garden, which is very well tended. “She is the lady who had a manger in her garden during Christmas,” Ani recalled.

We returned to the car to get the bags that were prepared with food and clothes, and we bid farewell with the feeling of having met a saint of daily life, here, in the periphery of Asunción, in the periphery (in Francis’ sense) of society, among the “Lord’s favorites,” Pope Francis’ favorites. Through the 100 houses, we have had the privilege to be a part of this reality. Are we truly the ones who give, and they are the ones who receive?” I asked Ani, while we tried to find the road that seemed to be lost in the large puddles. “It is a covenant of solidarity,” she answered, and for several minutes, we both remained in an emotional silence. I have traveled more than 10,000 km, and I have used all my annual vacation days to make this visit to Paraguay. Just that afternoon as I saw three of the 100 houses of solidarity, it made it all worthwhile. 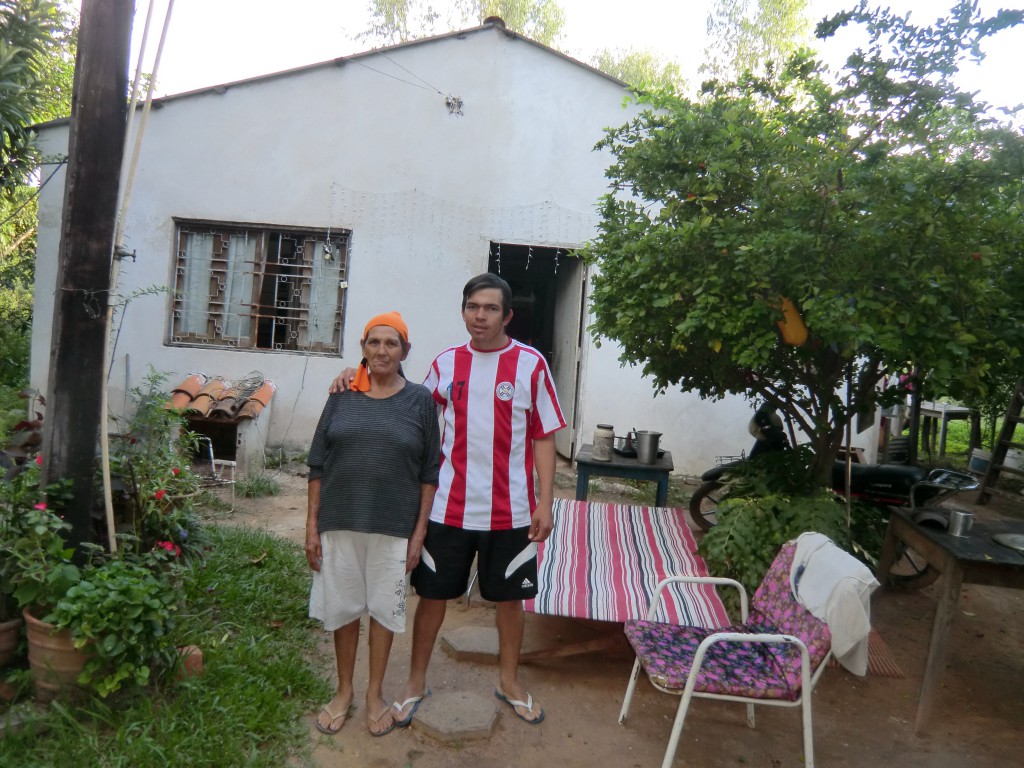 A roof, a home, a family

The third house was easily seen from the main route. We left the car at the edge of the street, and we walked toward the house. We passed through a fragile walkway over a small reservoir, then among clothes’ lines with clothes hanging, evidence that a large family lived here. They were waiting for us in front of their house, a mother with her five children all of them with a happy smile. They know Ani; she not only has given them the beautiful house sheltering them and providing a roof for them to live with dignity as a family; but moreover, she continues to visit them giving each one of the children their bag with clothes and toys, and the mother receives a bag with bottles of juice and other food. What sensitivity! There is a bag for each one, a personalized gift. “I know my own…” Since there were so many bags, I also carried some of them and gave them to two of the children. I don’t know when I have seen so much joy and sincere gratitude in the eyes of a child as they were given a simple gift. “Is it mine, aunt?” the little one asked me. “Yes, it is yours.” Upon hearing his extended “thank you” I felt it was meant for each one of those who are a part of the “100” houses from Australia, South Africa, Spain, Switzerland, Austria, Germany, Argentina, the United States, Brazil, Chile and Paraguay.

Perhaps Pope Francis will pass by on a route where one of our 100 houses can be seen. But it does not matter if he cannot visit the families who live in them. He knows about the 100 houses, and he will bless them when he blesses Paraguay. 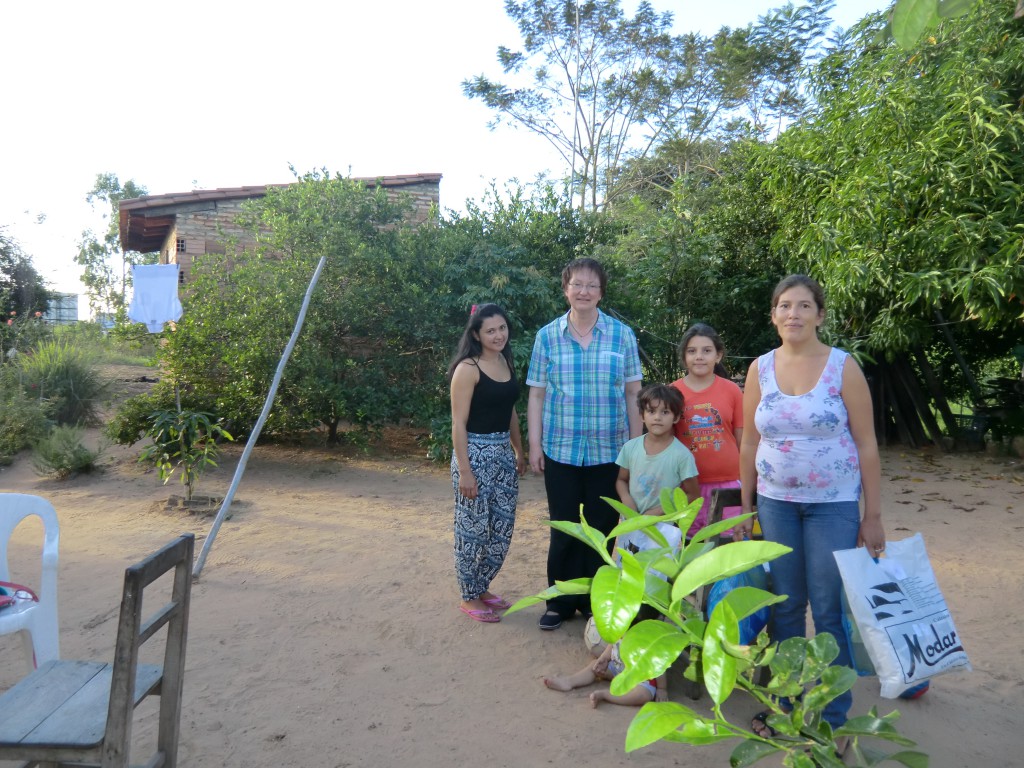 While I was writing this article the official hymn for Francis’ visit to Paraguay was publicized. Thousands will be singing it:

“Shepherd with the smell of sheep
who goes to the peripheries
in search of the most needy ones.
You go showing with the simplicity of life
that to announce Christ is to love others.”

I left Ani money to build seven more houses. We continue with the houses, “in search of the most needy ones.” Thank you, Holy Father.

TRANSFER TO ACCOUNT FOR DONATIONS (SEPA) – Option for donations from Europe

Photos of the visit

Photos of the construction of the houses