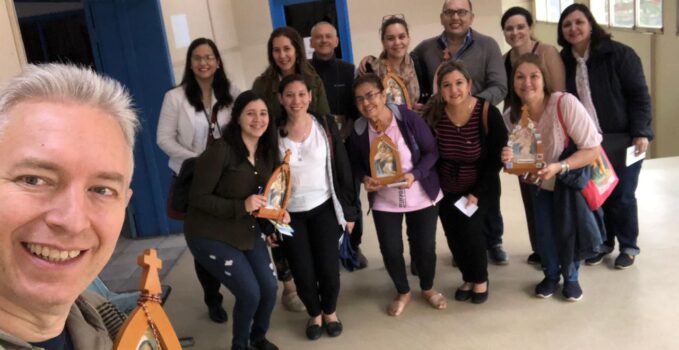 As on every first Saturday of the month, we had our mission at the Social Welfare Institute Central Hospital. There were only twelve of us among the Rosary Campaign missionaries and three Eucharistic ministers, so we could only go two by two (maximum three) and we also had some Pilgrim MTAs. —

The SWI Mission takes place every first Saturday at the Social Welfare Institute Central Hospital (or SWI/CH). It began with a priest sending out and the Eucharistic ministers and us. The Rosary Campaign missionaries and several people that were involved in this apostolate travel the building’s eight floors taking the Eucharist and visiting the sick and their families with the Pilgrim MTA. When the priest participates, Sacraments of the Anointing of the sick and Reconciliation are also offered. It culminates with the Holy Rosary in the chapel on the first floor.

From the sending prayer Mrs. Jorgelina, a missionary from the interior of Paraguay, who had a relative on the fourth floor’s orthopedic ward, joined us.

It was my turn to be a missionary on the third floor, in the pediatric area with Paty Báez, who had recently received her Pilgrim MTA in the family. Licentiates Zunilda and Luz received us for the corresponding permission. In the first room, there were brothers and sisters from another church. Although we could not take the little Pilgrim Mother, we learned that the sick child’s name was Oscar who was with his mother, Sandra. In the next room, we met Emma and her mother, Patricia. She is a miracle baby hospitalized for congenital heart disease. The mother also told us that she was asking prayer for Mateo, another baby who was in a worse state than her own daughter.

Among those sick children, there were several: Analía, Ángel, Norma, Rossana, Jessica and Elías.

When we left the children’s therapy area, Patricia and Olga followed us. The first one told us: “Take this to buy a candle for the Blessed Mother”, I looked and they were bills of 6,000 guaraníes and I said: “No, no, no. Keep it. We are going to pray for you during the Rosary” and we hug you and say goodbye. 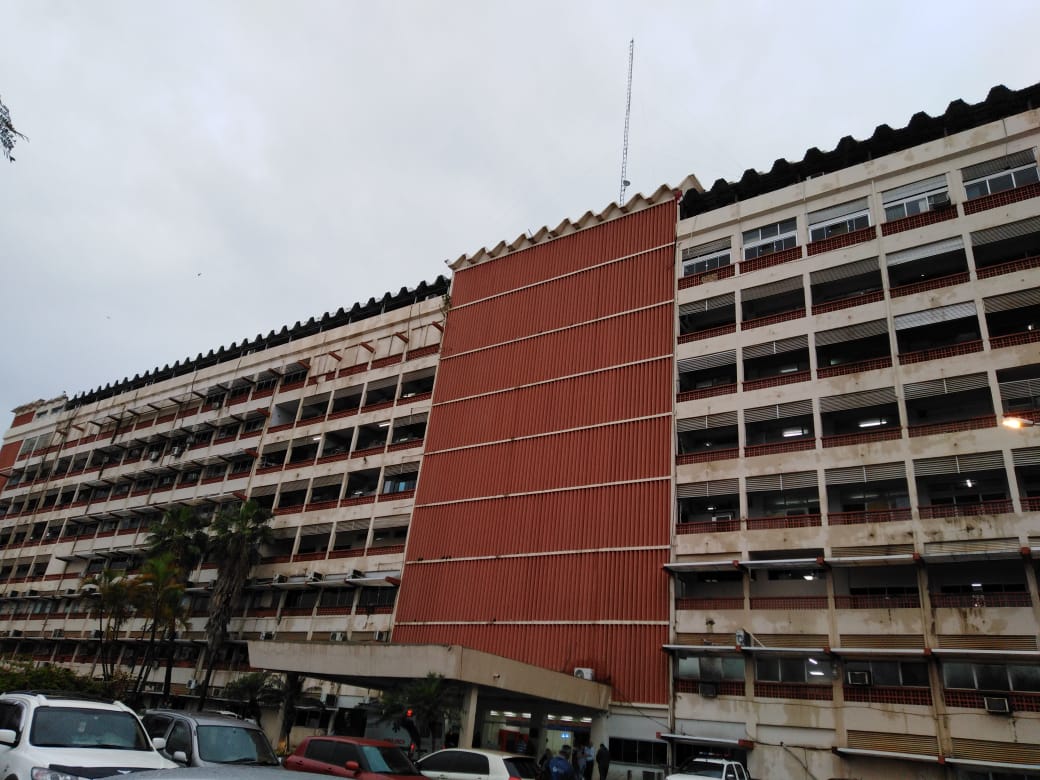 Mary and Jesus in the pediatric oncology area

Pediatric oncology is what I personally consider to be the most delicate and difficult area of mission. It is sensitive and at the same time beautiful: a Heaven on Earth, because I see each sick person as an angel that is passing through here. Licentiate Lourdes received us and told us thank God we could visit every patient; there we met Gustavo Rodriguez’s family. He was sleeping; he was a big boy and had a high fever. I was able to give holy water to the family, and they were very touched to see that Mary and Jesus were visiting them.

The next room belonged to a “holy family.” There was a 7-year-old boy, his right eye covered; he had a tumor in his little head. I asked them if he was baptized, and they told me that before his operation, when he could still speak, he asked them why he had not been baptized yet. He has to be a child of God! And so it was, thanks to their insistence they baptized him when he grew up. I asked them what his name was and they told me His grandfather before going to heaven, told his mother that if the baby was a boy, he would be called Luke, and after knowing that it was a boy that was waiting, so they named him, in honor of his grandfather who died before meeting him.

Lucas had had tremendous headaches; they did not find a diagnosis, until after a visit to the eye doctor, where a tumor was detected behind his eye, and it was just in time. They were able to operate on him, but he was currently suffering with an infection that made him convulse sometimes.

“Let the little children come to me…” 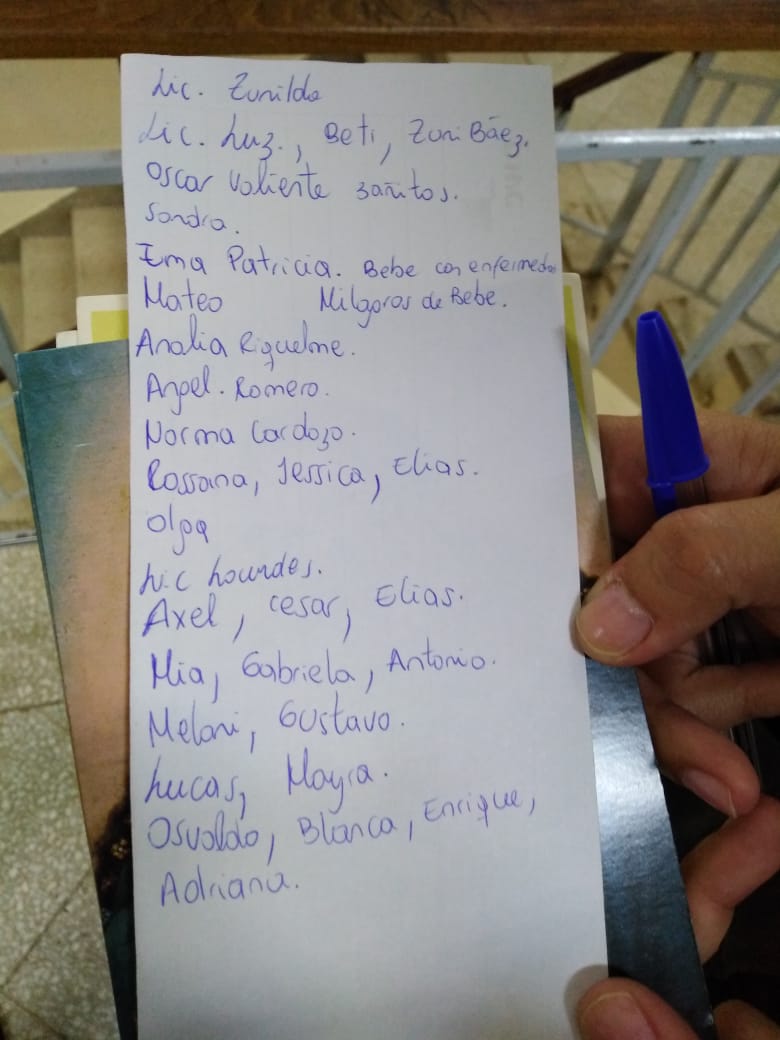 I found Mayra, a teenager who was admitted the day before and had already made her first communion. She was very excited because she was able to receive Communion.

Finally, we visited Jhosias, a three-year-old boy. She didn’t say a word because she thought I was her doctor, because I was dressed as a minister.

In the adult orthopedic area, patients Liliana, Pelusia, and Bienvenida were waiting for me to receive the Eucharist. How great is the love of a grandmother! Mrs. Pelusia, lying in the hospital bed, asked us to pray for her little grandchild, Osvaldo a newborn baby who had just been discharged.

I had one Eucharistic host left…

Coming out of the hospital, Mrs. Gladys was waiting for me. On Tuesday, 8 October, she will undergo a delicate operation. She told me that she is also a Eucharistic minister. She is still going to visit some sick people and that is a great service. Previously she also went to the hospital and dismissed me saying: “You have just written your name in heaven.” And the service is really like today’s Gospel (Luke 10:17-24), when the apostles returned from their ministries and shared with our Lord.

In every room, I reminded them of a phrase from my favorite Catholic musician, Martin Valverde: “Believe in a great God, and you will see a great God.”