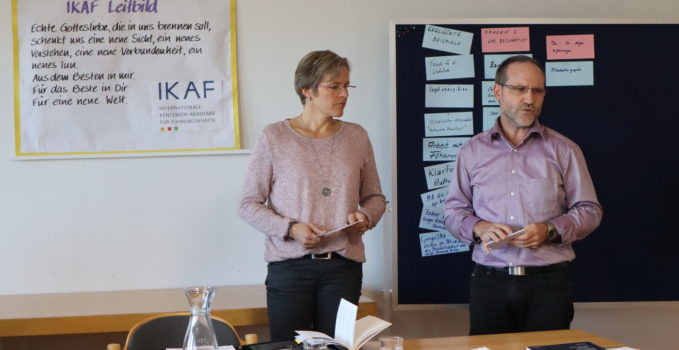 Intense, strenuous, rewarding because intellectually stimulating, good atmosphere, wonderful climate – somewhat relaxed, light: those were the feelings of some of the participants at the end of the weekend for business people and leaders, which took place in glorious autumn weather from 9-11 November in the Schoenstatt Centre, Memhölz. Following the proven IKAF (International Kentenich Academy for Business Leaders) method,  learnt from studying the MTA magazine,  the programme consited in the participants and their experiences. —

Three participants had shared an experience shortly before this when they took part in a sailing retreat off the Croatian coast. They made the others healthily envious and challenged them to translate this experience into the everyday life of a business. 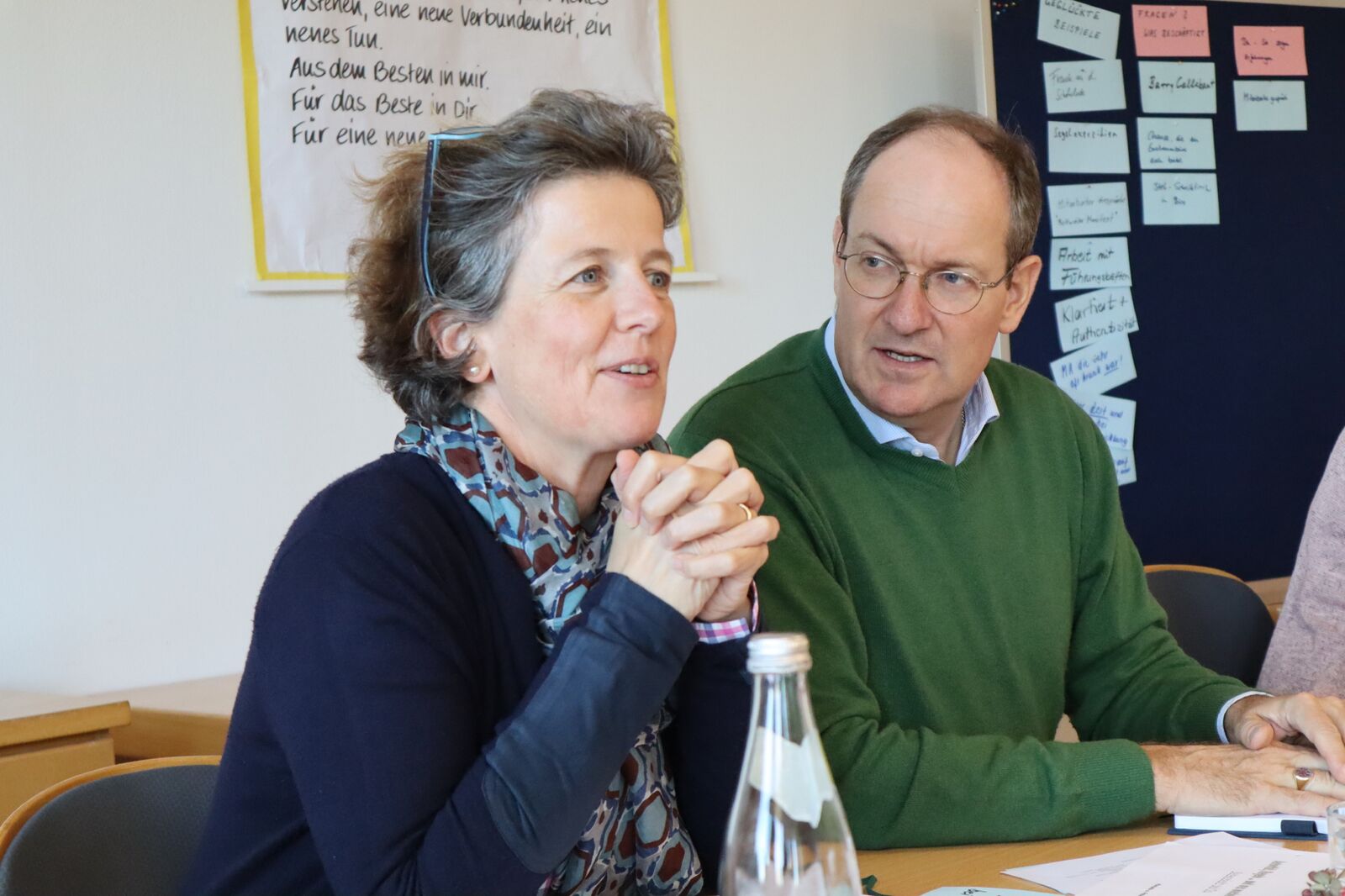 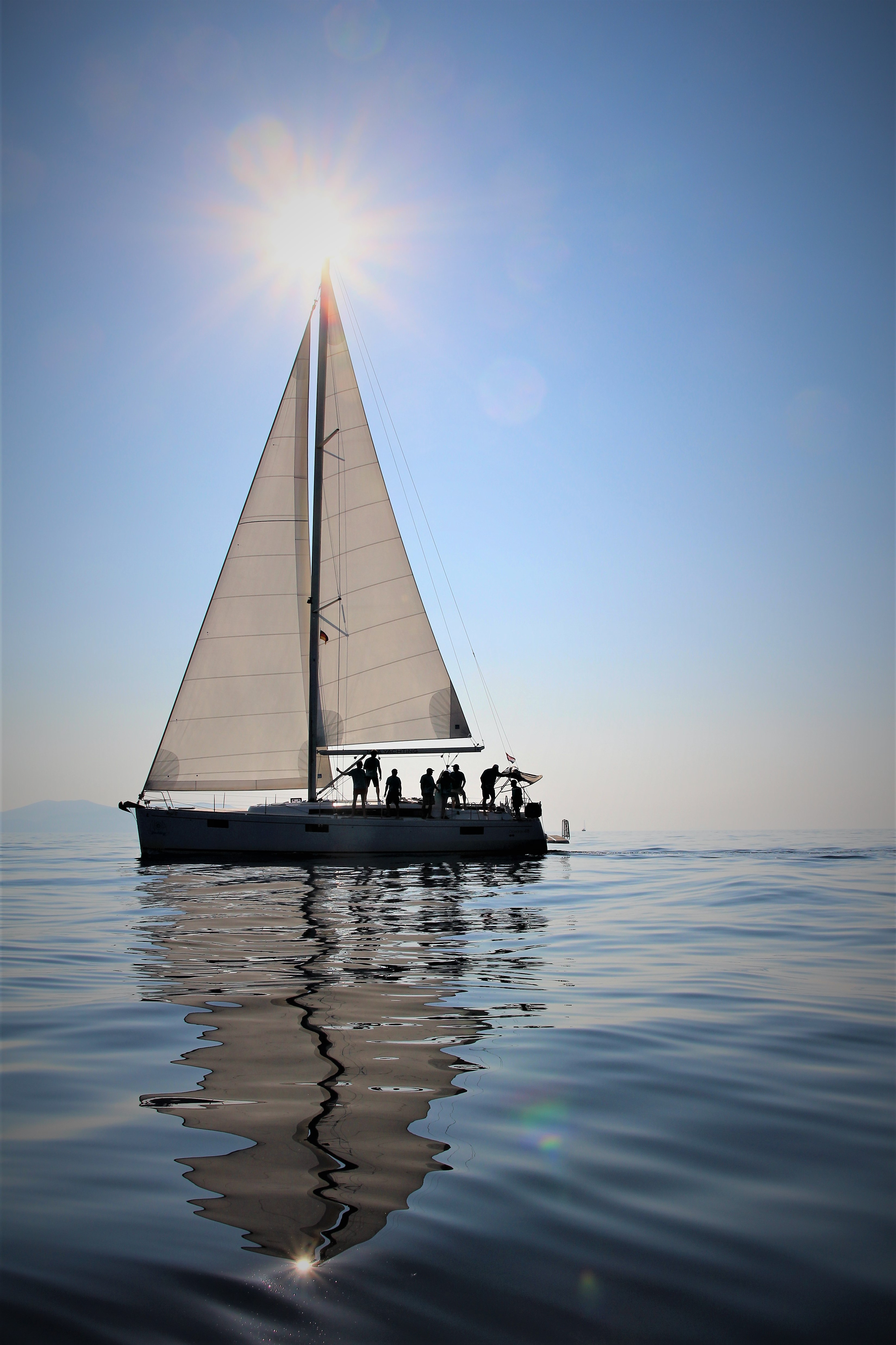 The department head is the skipper on a boat. He can’t do everything on his own; he needs collaborators. Since the whole situation is “temporary”, you can’t try out how leadership functions. Something also has to be done on board for cultivating the spirit. The co-workers have to be integrated into the processes of the business (sailing). Any number of jobs are waiting to be done and these have to be distributed.

What is important is that each one who has taken on a task has to carry it out, otherwise the whole thing doesn’t work. Just the matter of coming into harbour means that ropes have to be distributed and each one has to know and be prepared to do what it takes. To start with it is a bit clumsy, but it soon works, because each one is looking out for what has to be done. It is interesting to see how the people/co-workers co-operate and how they can be integrated. It is lovely to see how in the course of a week each person has discovered his or her task and responsibility, and in this way contributes to the success of the undertaking.

For example, someone contributes his or her ability to write reports. It is interesting to see how the participants in this sailing week were “doers”, yet in spite of this they collaborated because they got involved with each other and also trusted that things would work out if they did it together.

The skipper had to hand over the responsibility for certain areas and trust that the person concerned would act correctly and well. In this way the readiness of the individual increased to do things that didn’t really suit them, or that they didn’t like doing. The experience of succeeding together was uplifting.

And then situations arose in which the captain’s instructions were necessary. When the wind rose, it meant: “put on your life jackets and fix your life-lines”, and the “boss” took over the tiller. The ship heeled over on its side and sailed on. The inexperienced held their breath. However, the general feeling was, “We have a captain and he knows what he is doing.”

It was fascinating.  The condensed enthusiasm was infection. As a result, during that weekend a new idea for businesses and leaders arose: An IKAF Sailing  Turn. … An introductory weekend at sea, or even better, a week in Croatia … during which each one takes the tiller and experiences very personally: What happens when I take over the leadership, what does leading feel like? What happens when I don’t take over the leadership? And also the experience: To whom do I give which task, and observe: Who can do something well, who has what abilities, and in this way discover the strengths of each one. 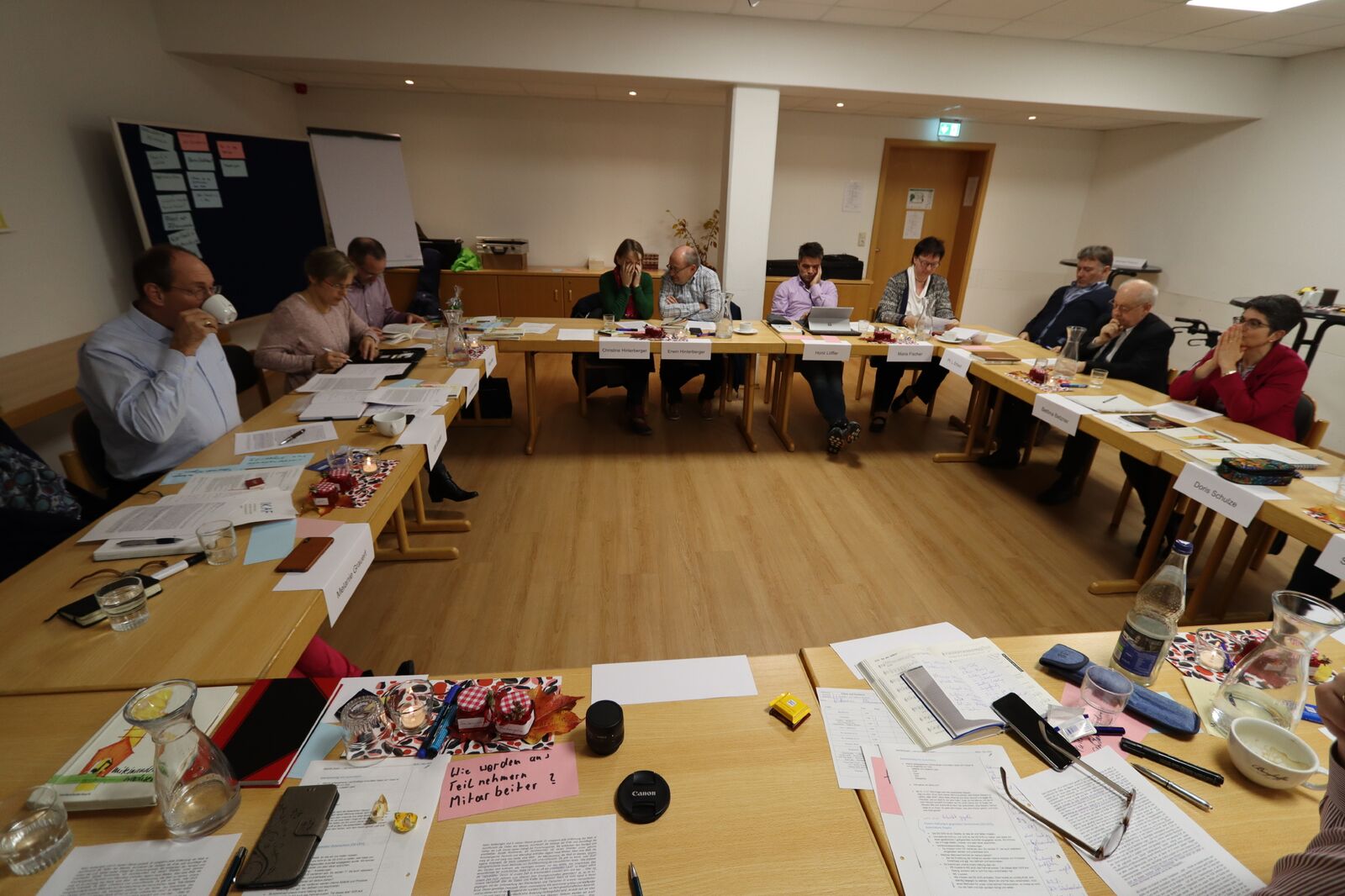 A new way of communication within a business: COFFEE TALK: plunge in – exchange – listen to the point

A leading business for consumer electronics and services in Germany with millions of clients has developed a new concept. In order to remain in regular and personal conversation and exchange with its own staff, they now have a so-called COFFEE TALK.

Colleagues from very different sections of the company and

different hierarchical levels are invited a number of times a year by the management.

The concept is clear:

Initially it is unusual and to start with needs a strong declaration that the participants are really asked to talk about what is moving them at that moment. The members of staff who have already taken part are enthusiastic. “It’s brilliant, wonderful, only positive!” …”Through the open conversation without anything being prescribed, each one makes a contribution, and they discuss actual and current issues, and what interests them. Information is passed on, as well as what has gone wrong and how they can sort it out together. What have they noticed with regard to the way the business is run? The best part is that there are no minutes of the meeting and no To-Do lists. However, experience shows that what has been discussed continues to have an effect, and is afterwards applied and corrected in the business. The management team go from table to table and enter into the conversation … what moves you, what is up for discussion …?

Since the staff members meet others from other areas of the business (technology, guarantees, customer complaints, development, management, negotiation, etc. …) a new set of relationships suddenly begins. …”There is a face I have never got to know. … Next time I will not send an email but use the phone …”

The things people talk about over a cup of coffee often has a greater effect than what is on the agenda and discussed during an official meeting. One member of staff said:

“… I am taking calls for customer complaints. The communication between negotiation, technicians and customer service is passed on directly by SMS on the internal mobile phone. We already knew a technician who is working miles away in the Rhuhr area, because we had repeatedly received customer complaints about him on account of missed appointments and unpunctuality. We already became angry when we again received an SMS about him. Suddenly he stood beside me during a COFFEE CHAT, and we talked about the traffic situation and the status of the roads between Duisburg, Essen, Wuppertal and Dortmund – one of the largest Bermuda triangles on the German Autobahn. After that it became clear to me that I would rather sit next to the telephone in the customer complaints department that on the Autobahn with all its stress. A few days later we again received an SMS about a delay, and a call for help from precisely this technician. “Traffic jam on the AI, I can’t get to my appointment on time!” It suddenly looked quite different. I have also been in a traffic jam. You really can’t do a thing about it. The telephone conversation with the angry customer took a much better turn than usual. I realized that if you have a face in front of you, you know with whom you are working.

Things take on a completely new quality, because you aren’t working with an anonymous department, everything becomes personal, there is a relationship there and the quality of the work improves. I know whom I am dealing with.” 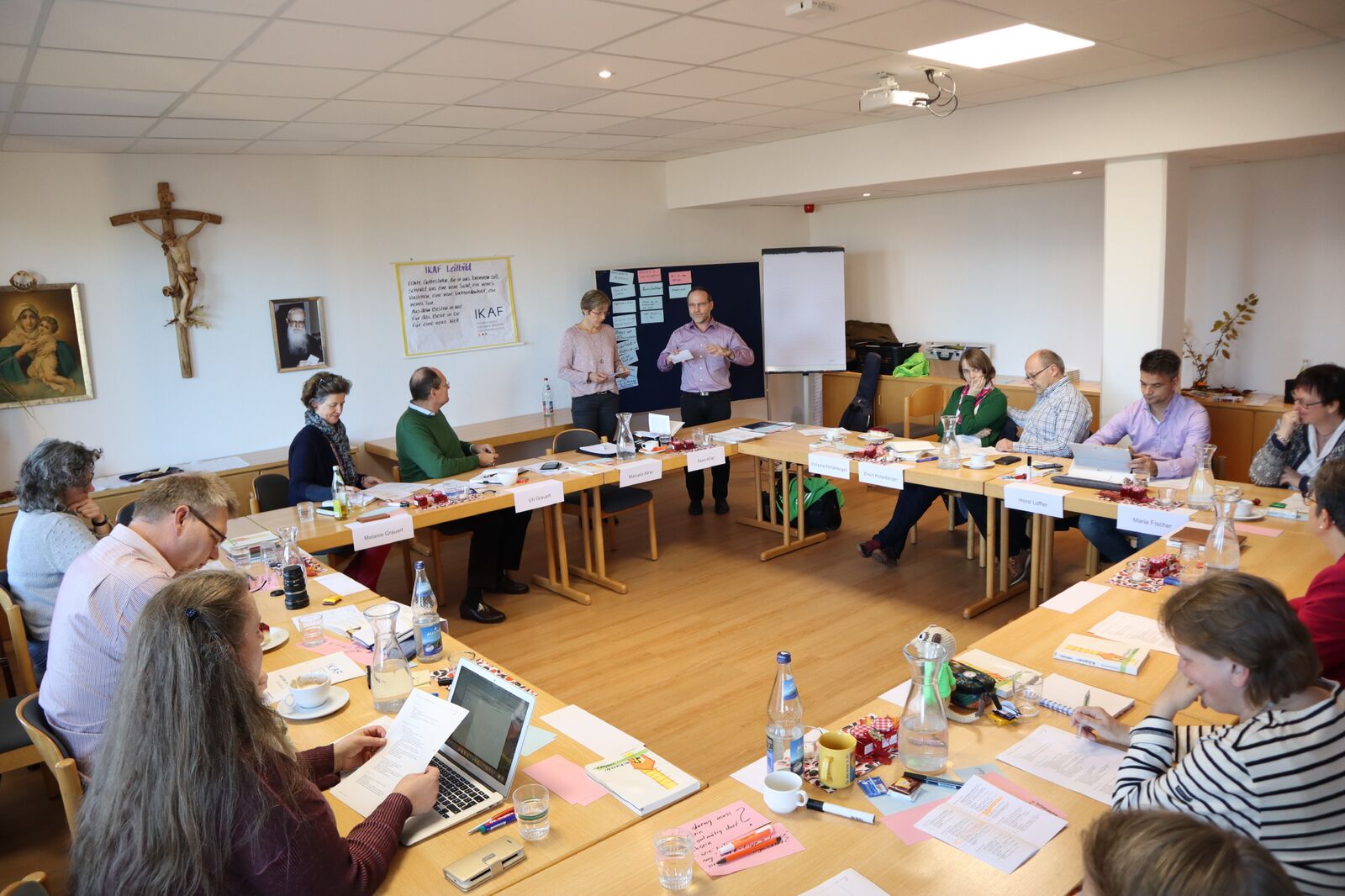 Data protection & Co – authority and regulations … and how to deal with them?

A highpoint of the weekend for business people and leaders was the talk given by Manuela and Peter Miller. For years they have been professionally and privately on the road in their IT business. Their subject was quality and data protection resulting from a long discussion during the previous congress at the beginning of the year. It was comprehensive and informative. The discussion returned repeatedly to the principle: the dignity of the human person is inviolable. This is what is at stake with regard to protecting personal data. What regulations serve the human person?

The new General Data Protection Regulations (GDPR)) are certainly comprehensive, much has been thought of and new procedures are required. However, it is also clear that it won’t work without rules. According to Fr Kentenich, the spirit creates the forms. The dignity of the human person is inviolable, so it needs forms to secure it, for example, the GDPR; in the process we have to be on our guard so that the form doesn’t destroy the spirit. The principle is protection and security (as form and spirit), but the law on its own, without the spirit, will not be sufficient protection. On a personal level we want to remain active, and make use of an “outward lack of freedom in order to grow in inner freedom” (Fr K). In the end Mrs Miller called out: “Let us decide in freedom to obey the laws laid upon us by legitimate authorities. Each act of rational submission makes us inwardly free and independent.”

By the way, we also realized that Schoenstatt has to be careful in the way it deals with personal data.

Why doesn’t schoenstatt.org simply pass on the email addresses of other Schoenstatters; why do they take so much trouble to ensure that their pages conform to the GDPR; and why do they refuse to publish articles in which personal data are requested unless they have been assured how this data will be used? On account of GDPR, and on account of the question about the dignity and freedom of people. 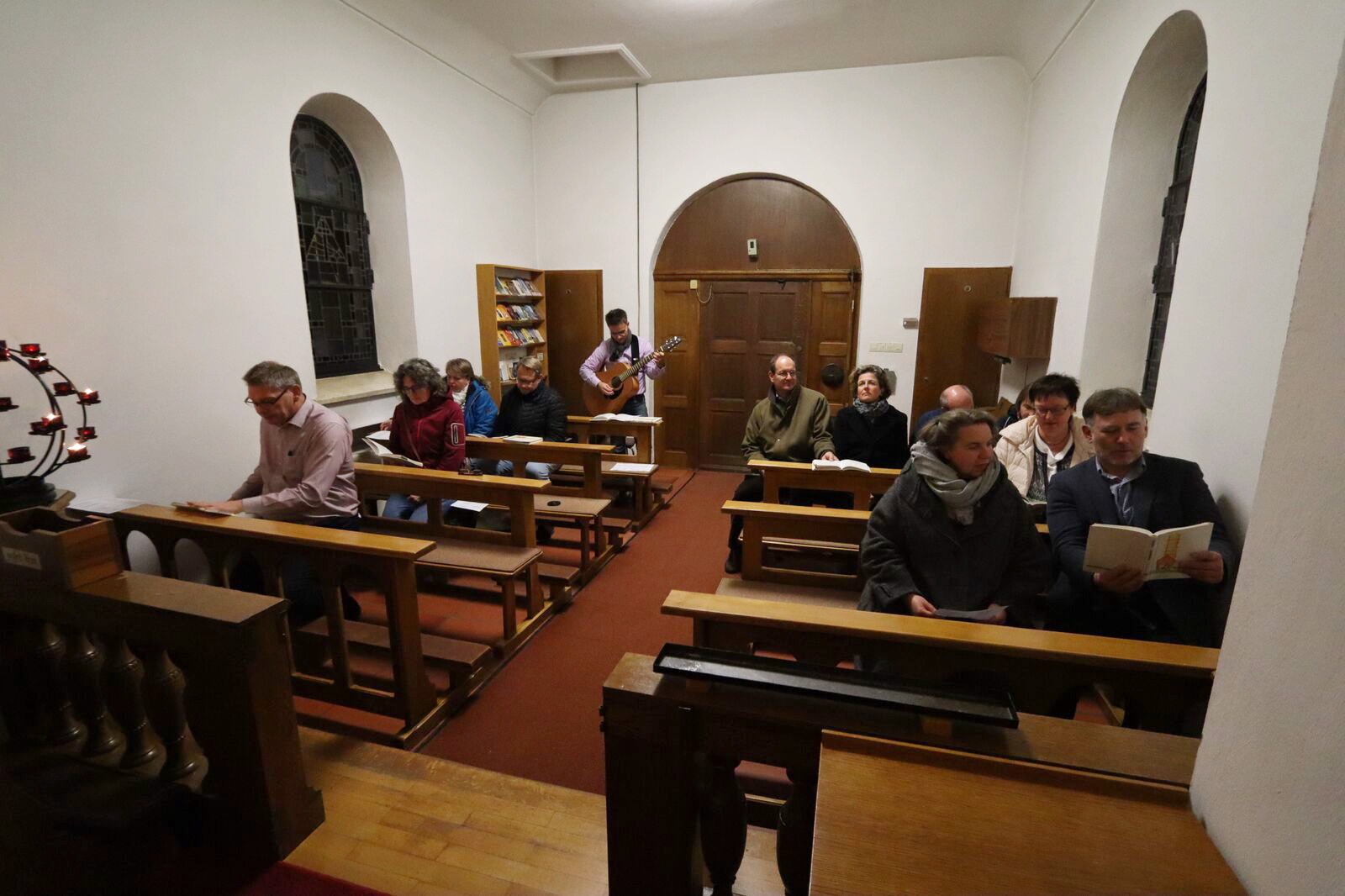 On Saturday afternoon there was again time to be touched by texts from Fr Kentenich’s works. They are always new, timely and strengthen the personality. Extracts from the Pre-Founding Document of 27 October 1912:

“… The more there is outward progress, the greater must be the growth in inner depth. … This is required by our idealism … and the enthusiasm of our hearts; this is required by our society; this is required, above all, by the people around us (colleagues). … To exercise a deep and lasting influence on our surroundings. Ultimately we do this not by the radiance of our being, but by the strength, the inner richness of our personality. We have to learn how to educate ourselves. We have to educate ourselves – ourselves with all our abilities …” 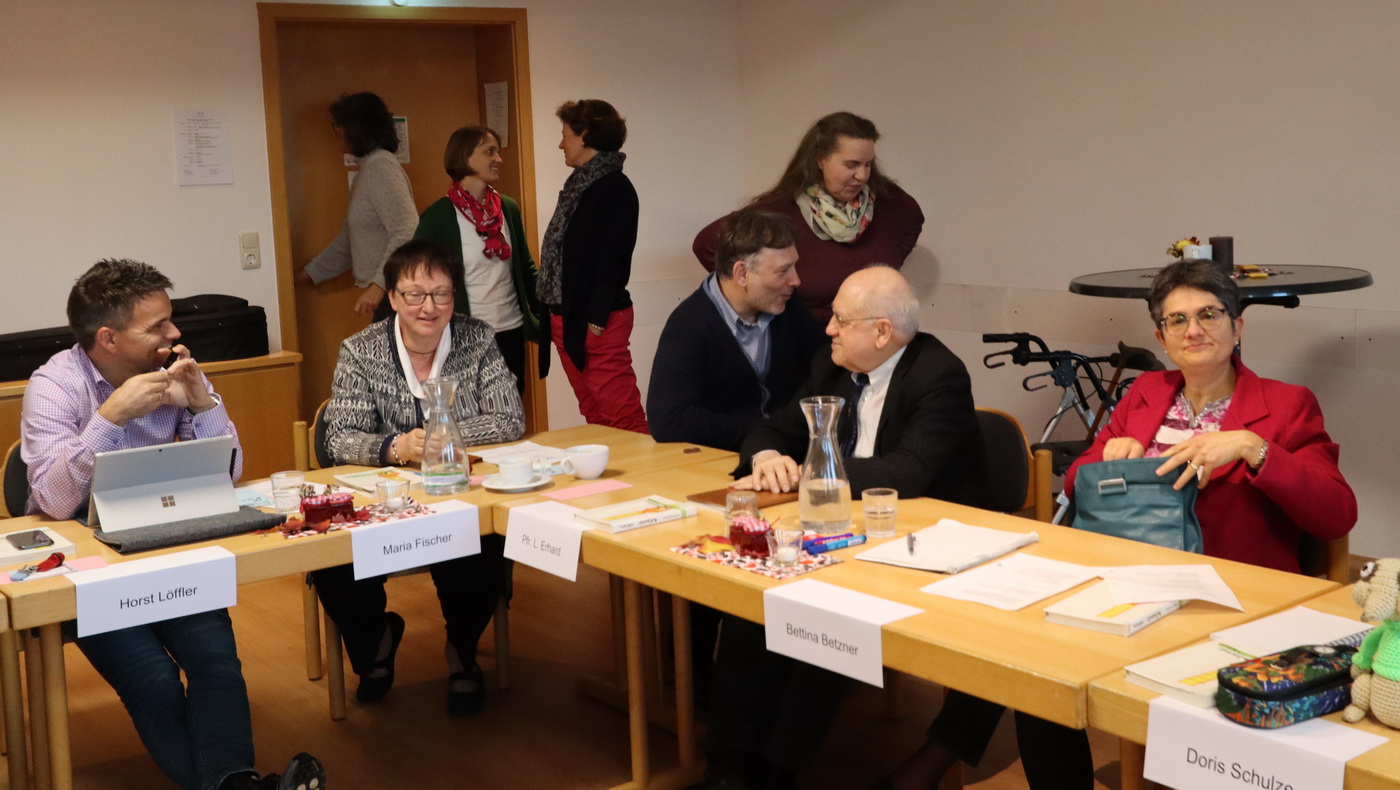