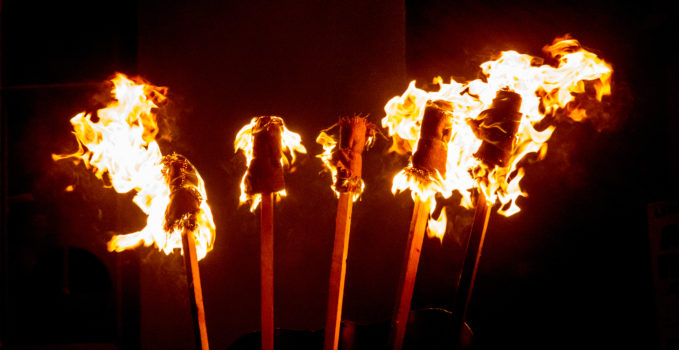 In 2009, and at the root of an initiative begun by the Shoenstatt Young Men from Germany, the first Fackellauf in the Movement’s history began with taking the torch from Schoenstatt in Germany to Rome.  Five years later, during the Centenary celebration of the Schoenstatt Work, it took off taking the mission’s torch from Pompeii to Schoenstatt. —

This year 2018, a third Fackellauf will take place. You may ask yourself: in reality, what is Fackellauf about? The literal translation of the word Fackellauf in German is “torch race”, that is Fackellauf is a relay race with a torch. Is it just a relay race? No! This race has a spiritual motivation. The idea of carrying out a national Fackellauf emerged from the desire of Maringá’s Young Men’s Youth that through this act wanted to contribute to the conquest of the future Maringá daughter shrine in Paraná.

We are sure the Blessed Mother wants it, and it is confirmed in the voices of the time: we are going to conquer this challenge with fire for the shrine with this Fackellauf.

Spurred on by 3 major events

This conquest couldn’t come at a better or more meaningful moment: we are celebrating \ JUMAS Maringá’s 20th “founding” Anniversary, and Divine Providence has given us the gift of the centenary of Josef Engling’s death, a Schoenstatt hero of great importance for our Movement and especially, for the Young Men’s Youth that has him as a role model and guiding star. Moreover this year, we are celebrating the Year of Father Kentenich, on the occasion of his return to the Father’s House and his being present with God.

These two important events leant themselves to spurring us on with great spiritual motivation; we want to place all our efforts in conquering this gift for our Queen.

Josef Engling: Who was he? What is his importance? How does he inspire us?

Josef Louis Engling, the fourth of Augusto Engling and Maria Masuth’s seven children, was born on 5 January 1898, in Prossiten – an East Prussia village, which at that time was German, now it is Polish. In his childhood, he had polio and as an after effect, he walked somewhat crookedly, and he had difficulty speaking. These circumstances made him the brunt of teasing and jokes, especially in the seminary, where there were those that judged him by his appearance.

In the Engling family home, the Mother of God had a place of honor in the living room. During May 1910 – when Joseph was preparing for his First Communion – they surrounded her with various flowers and Josef took charge of their care. This foreshadowed the great love he had for the MTA— Mater Ter Admirabilis— in the shrine, his spiritual home, and the “May Blossoms” for 1916, a symbol of his zeal for the Capital of Grace (the Nothing without us).

In such a way, he lived his co-responsibility for the realization of the “Schoenstatt Mystery”, that he was called “the lived Founding Document” by the founder of the Movement, Father Joseph Kentenich, to whom he gave himself in a profoundly filial manner, giving him his entire life, despite his melancholic temperament.

In a nutshell, his total giving of self to the Mother of God was revealed in his giving of his life for Mary. Undoubtedly, “Josef Engling’s Act” is the highest degree of giving of self in the Covenant of Love, showing an attitude of heroic living of the Blank Check and the Inscriptio.

In synthesis, Engling conquered and cultivated a deep attachment to the three contact points. In addition in his life, he embodied the Schoenstatt ideals and mission in an outstanding way.

It was for no other reason that on the morning of 11 April 1948, Fr. Kentenich gave a conference to the Family of Santa María/RS before the blessing of the Tabor Shrine, assuring that the future of that Family’s shrine depended on it allowing itself to be formed like a new Josef Engling: “It all depends on finding another Josef Engling who will give himself to the Mother of God and wholly allow her to educate him. If this happens, I guarantee you that the Mother of God and of Jesus will establish herself here to form a legion of small Josef Englings. Now I should ask you: Who wants to be the Josef Engling of South America? In response, I tell you that the Most Holy Virgin knows. In the Holy Mass, I will ask her – and I will do it for everyone who is present – as she establishes herself here as of today along with Jesus, so like she did in Schoenstatt, both will educate many of those who come to this place as small saints.

Answering the challenge of sacrifice

João Luiz Pozzobon was among those present, and as his life and work clearly show, he assumed the call and he allowed himself to be trained as a new Engling. Today we are invited to follow the footsteps to which he was called “the lived Founding Document”, in order that like him we live the heroism in self-education in forming new men for a new community.

Our Father and Founder, Fr. Kentenich, said that the jubilee years are years to recall. In these one hundred years of sacrifice, we recall October 1918, especially the day of Josef Engling’s sacrifice. In Brazil, we are preparing Josef Engling’s centenary with great enthusiasm. The National Fackellauf calls us to enkindle Brazil with the fire of Christ Tabor.