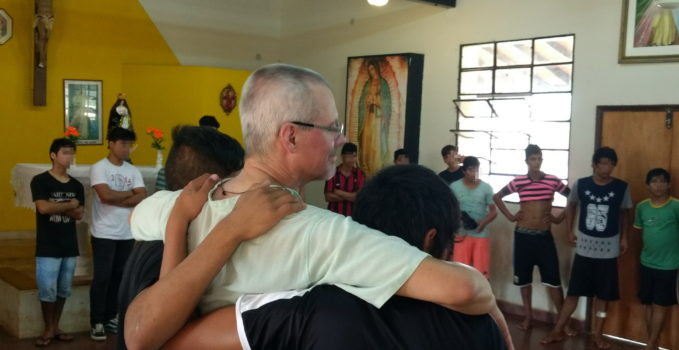 Where sandals, chocolate and hugs are gestures of God

“A mother continues to love her son even if he is in prison. A mother does not ask for human justice to be rescinded, because each mistake demands atonement. But a mother never stops suffering for her own child. She loves the child even though a sinner. God does the same with us: we are his beloved children!” These were Pope Francis’ words in the General Audience of 14 June, which made me recall one of the most touching (and overwhelming) moments of my life: those three or four hours on the Feast of the Annunciation of the Lord that I spent in the Juvenile Detention Center in Itauguá. I was a part of a small group of real parents, who love more than 200 youths literally to physical weariness with all the many hugs, hugs that are a language stronger than that of weapons, yelling or thefts… 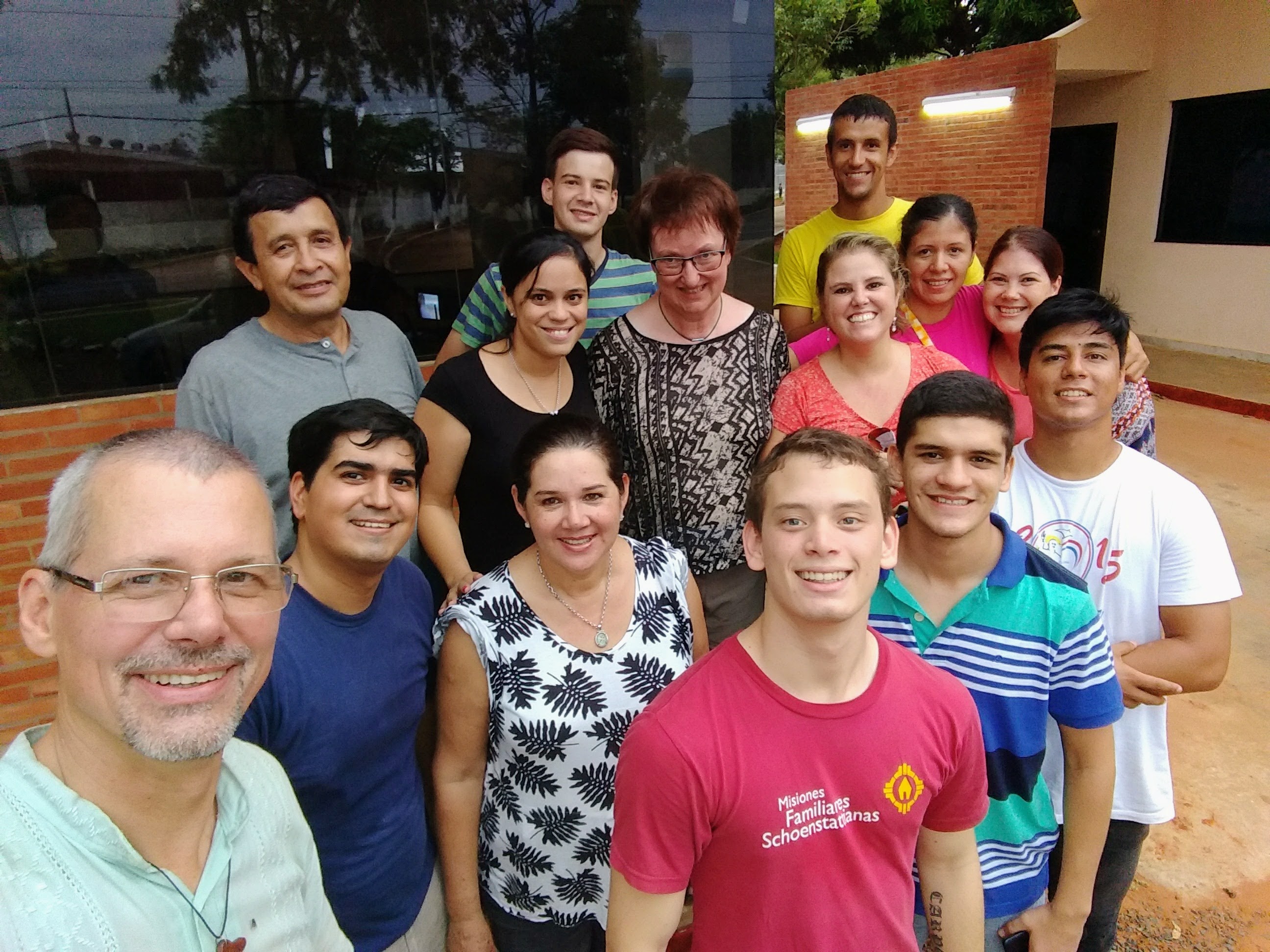 The team of the Prison Ministry “Visitación de María”

“Pa’i, zapatillas la bronca”: “Do you know what that means?” Fr. Pedro Kühlcke asked pilgrims during a Mass in Tupãrenda, and then he asked Ismelda, from the Prison Ministry team to explain this phrase in jailhouse vernacular… the sandals given at Christmas are now torn…which means going barefoot once again, having sore and tender feet.

So, the Prison Ministry team asked for donations in order to take new sandals to the more than 200 youths between the ages of 14-18. Those simple ones. The generosity of the Tupãrenda pilgrims was immense, and in thus, for the weekly Saturday visit, we not only took the never lacking chocolates, chips and cookies, but also several boxes of sandals. They were distributed after catechesis, group by group. The youths formed a line; they called them one by one. Before the presentation, Fr. Pedro and Ismelda explained that these sandals were a gift from people who love them. Moreover the gifts are not to be sold or belittled, but that they need to be well cared for, and to show their gratitude and respect to those who made it possible that everyone received shoes nine months after Christmas. They were given attentively and with affection.

“What size do you wear?” Javier looked at Christy with a single question marked on his face. He did not know. These were the first sandals in his life. He had to try them on. When Javier left with his blue sandals in his hands, as if they were a treasure, we had to really encourage him to wear them. When we were almost at the end of the distribution in his group, Martin returned. “They did not fit…” He had made a mistake in the size. His face shone upon exchanging the sandals that were too small for a pair more his size.

At that hour of the afternoon on 25 March, in the multi-purpose hall of the Juvenile Detention Center, with suffocating heat, and hours before a very strong storm, the 220 pairs of shoes became 220 gestures of God’s paternal affection. Of that incarnate God, who became man, to show us that he cares for us, that he loves us, that he takes care of us, that he carries us in his hands, and that he gives us shoes… “Lest you strike your foot against a stone,” (Psalm 91:12), and that “he guards the footsteps of his faithful ones (1 Sam: 2:9), of his most vulnerable, most forgotten, abused children. 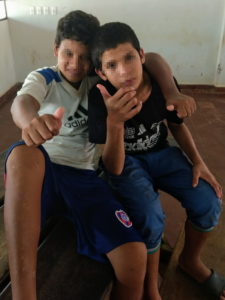 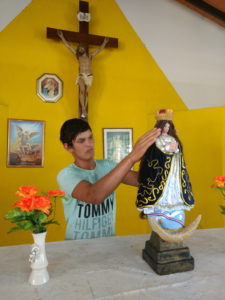 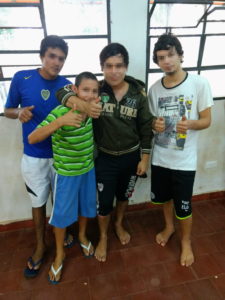 I had never received so many hugs in my life

Speaking of hugs. I had never received so many long, strong, affectionate, teary-eyed hugs in my life. “Is it possible that one can be exhausted from so much hugging?” I asked Fr. Pedro when we left the jail, while we drew close to the “Esperanza” (Hope), that semi-open space, where youths who can go out were. We were all drenched, with dirty clothes, wet with the youths’ sweat and the tears. “Yes,” he answered. It is physically tiring, when 220 young people hug you and not just once. It is the language of this prison ministry, the language that changes the atmosphere, that changes the way these youths feel, and it is shared. They seek the embrace of a “pa’I”, and of everyone who comes with him to visit them. They are hugs that simply communicate God’s love for them. In the most literal sense, God needs our arms, our hugs, to get close to them.  Where words are lacking (in part because they only know Guaraní, in part because one does not know what to say upon seeing their scars or upon hearing their stories), and where one cannot return to anything theoretical, we can only hug them silently, and sometimes simply cry with them. I do not know if I will ever see any of them again. I hope that it will not be in this place, since I hope that they will leave never to return, and although I do not know or remember their names, it is a farewell of brothers that I will carry in my prayers, day by day and forever. 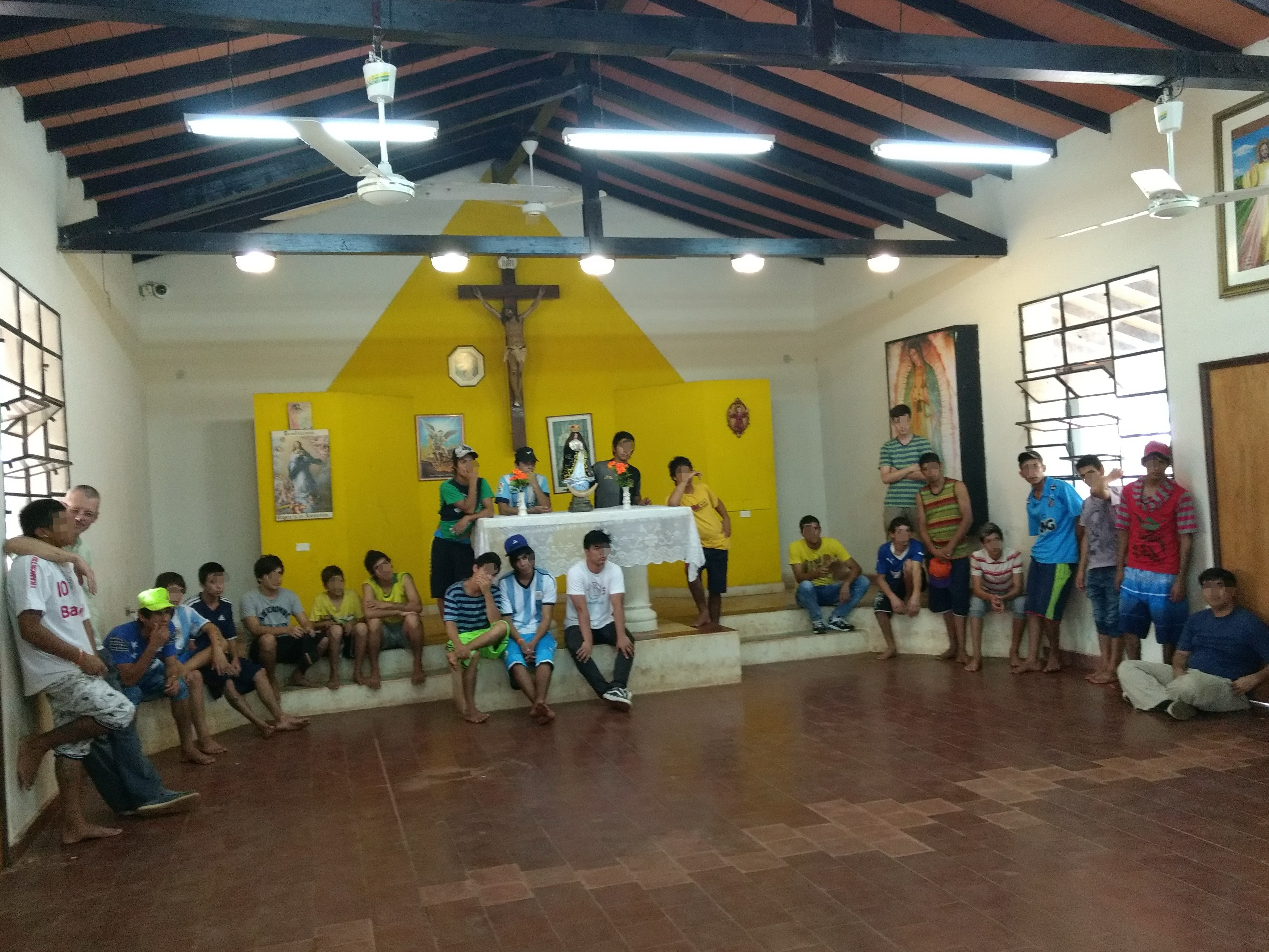 All those hugs ended at the end of a brief catechesis of each group by praying the Our Father and Hail Mary, everyone embraced, like a large family, a large covenant.

The chapel was simple, with a cross, the picture of the Mother Thrice Admirable of Schoenstatt, the Virgin of Guadalupe, and Jesus of Divine Mercy. One of the youths affectionately combed the long hair of a small statue of the Virgin of Caacupé that was on the altar. That is how we celebrated the Feast of the Annunciation of the Lord on 25 March 2017. It was a dignified, really beautiful and unforgettable celebration. 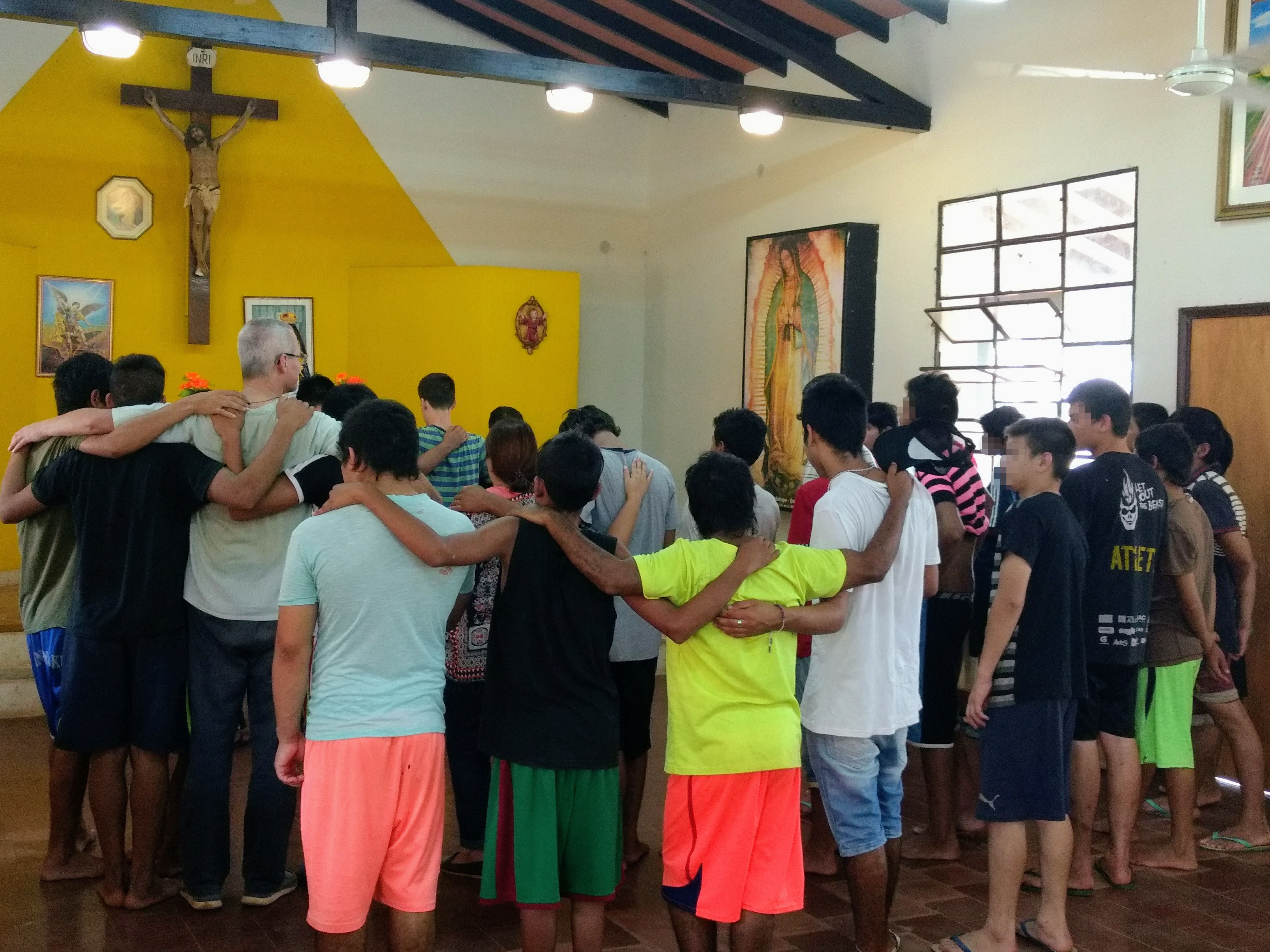 I want to change

With everything that happened that day, I remembered when a couple of days ago Fr. Pedro Kühlcke told me a real story of his visit to the Educational Center of Itauguá: (ECI)

“Today at the ECI, I was writing some information in my little notebook. Suddenly, a boy takes it from me and he begins to write in it. I thought that maybe he was writing his mother’s number, to ask for something, or something like that…

But no…what he wrote was: 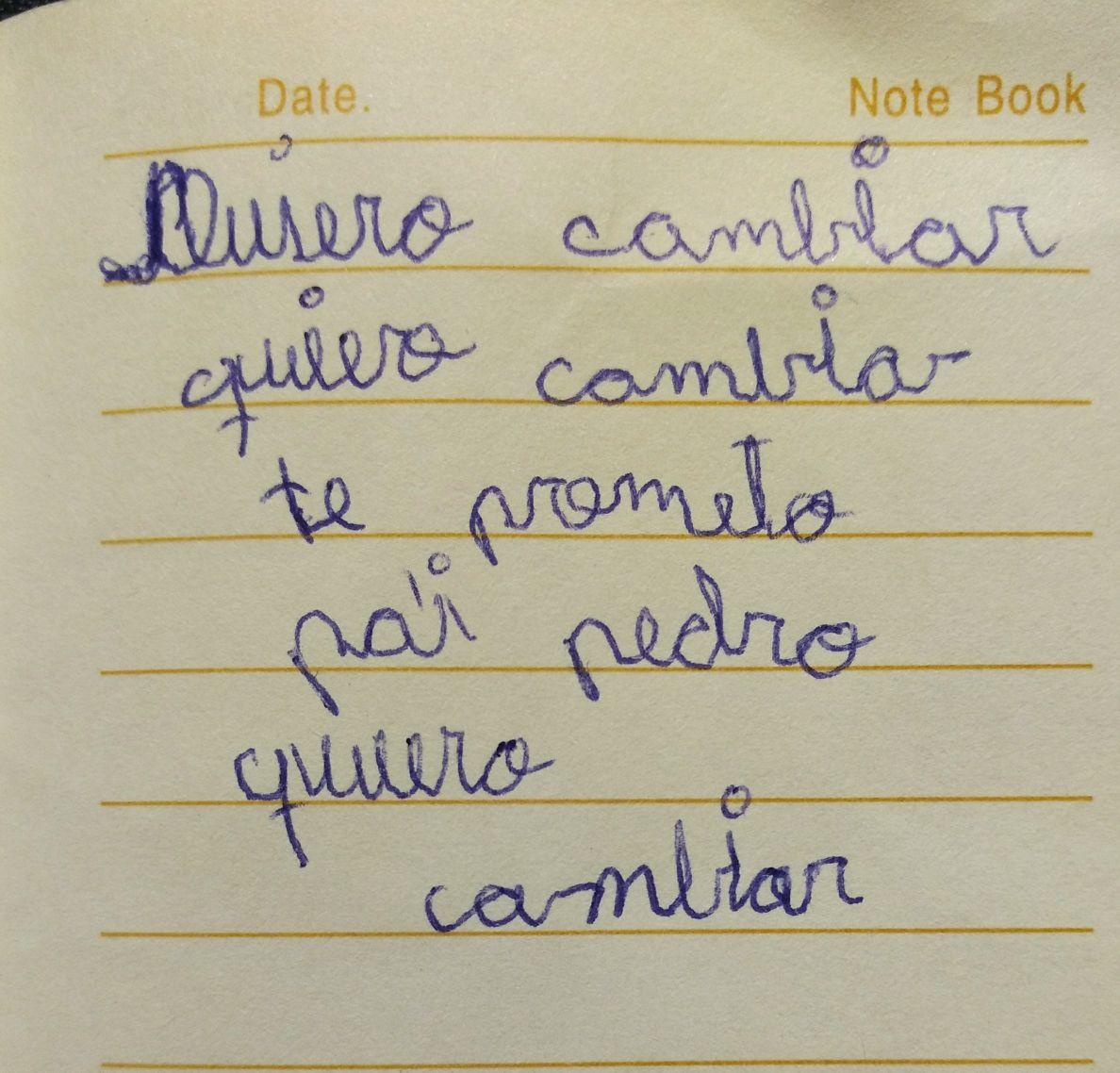 Who will help Pepito or me? 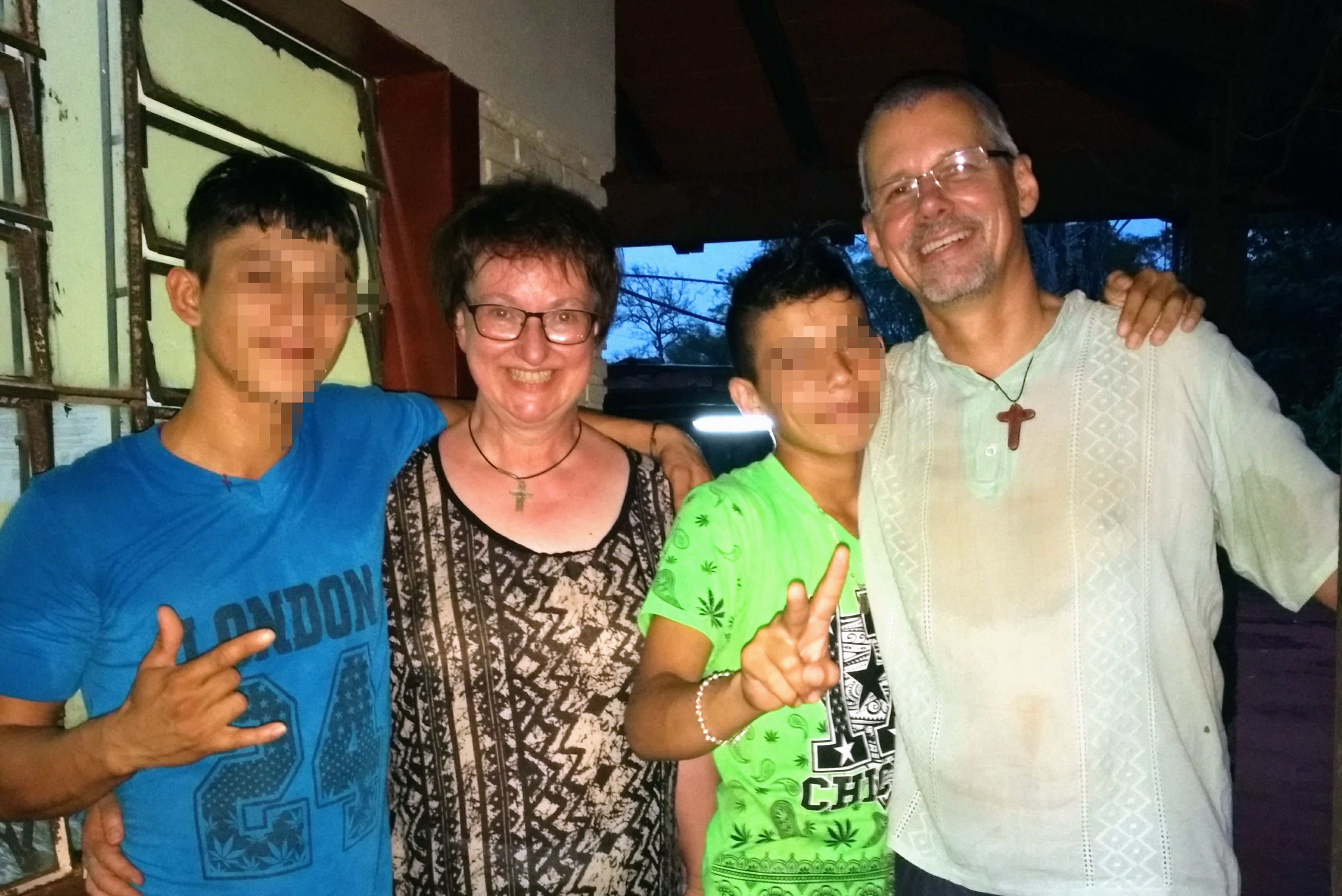 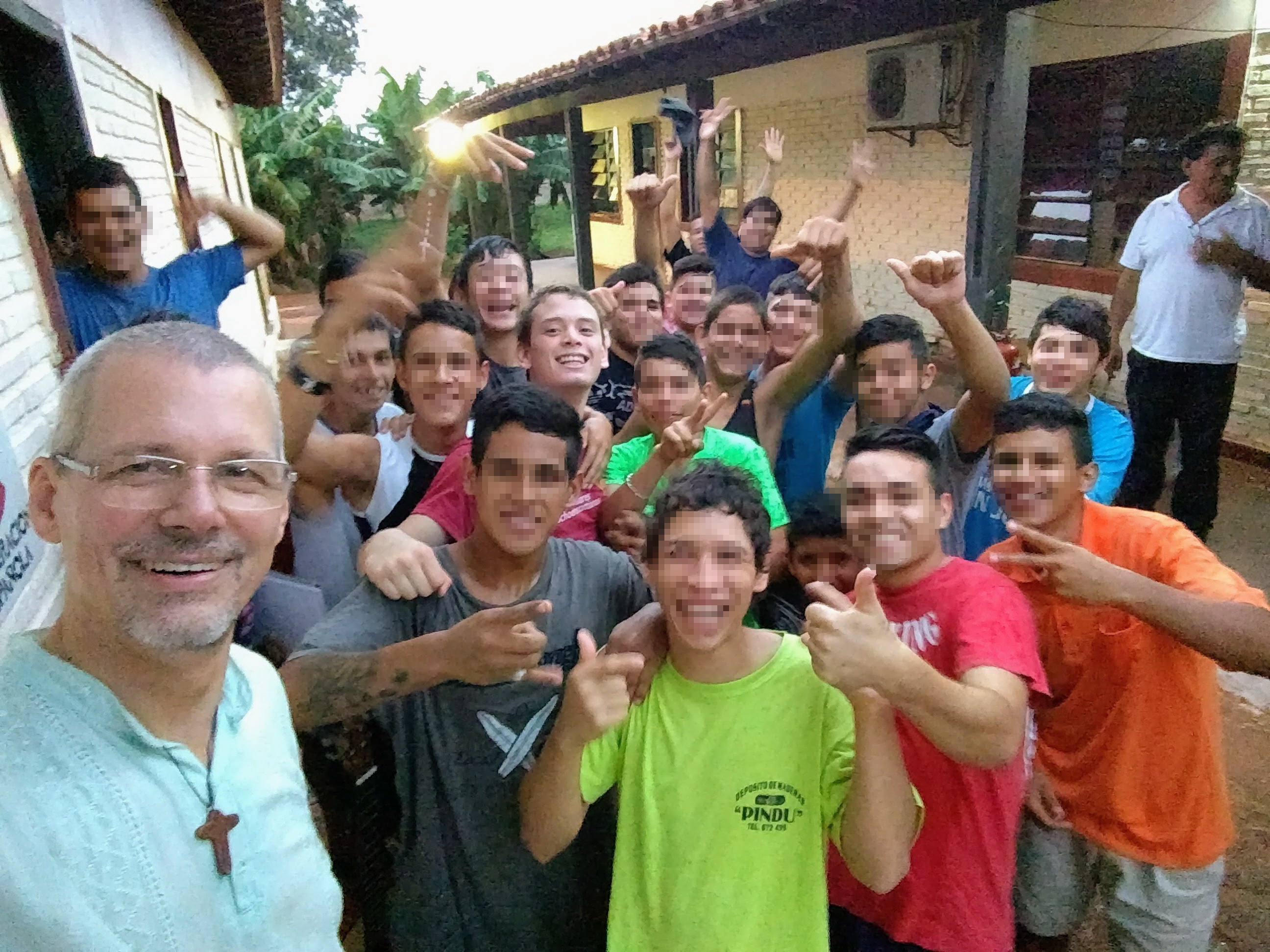