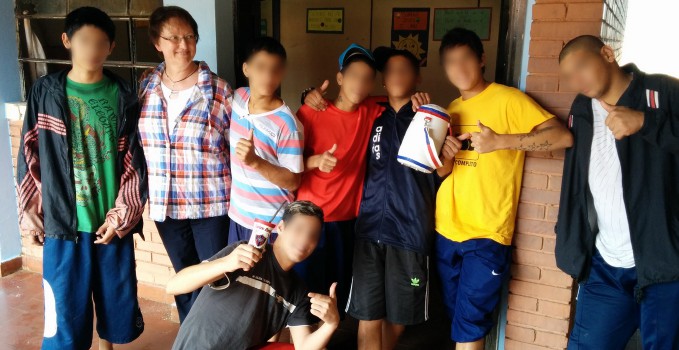 Jean Paul says, every first thing lasts eternally. Therefore after a week in Paraguay, after the barbeque, Paraguayan chips and dips, I still had not had the famous tereré [herbal tea]. The time came on a sunny and very hot Monday, five kilometers from Tuparenda, surrounded with smiles and expectant looks, a “Do you want tea? I made it for you, shall we drink it together?” A frightened look in Father Pedro Kuehlcke’s eyes was transformed into complete satisfaction at the moment of my first sip. It was my first herbal tea, and I have never drunk a better herbal tea. It was an herbal tea with the flavor of poverty, misery, hope, solidarity, friendship and commitment with these boys and with the desire to request the Nobel Peace prize for Father Pedro.

We were at the Centro Educativo de Itaugua [Educational Center of Itaugua] (CEI), better known as “Panchito,” the largest prison for minors in Paraguay; it is located five km. from Tupãrenda, drinking herbal tea with approximately ten of the youths, ages 14-18. It is the first and the best herbal tea of my life this herbal tea was prepared by the jailed youths that we came to see.

An hour before, we entered without much review. Father Pedro Kuehlcke has gained the trust of the employees during the months he has worked in the prison ministry: be it the guard, the teachers or the other employees and volunteers of this institution. While they were opening the door for us, a guard entered with two fifteen-year-old youths in handcuffs. Yes, we were in a jail, and this jail atmosphere is breathed in Hamburg as well as in Itauguá. 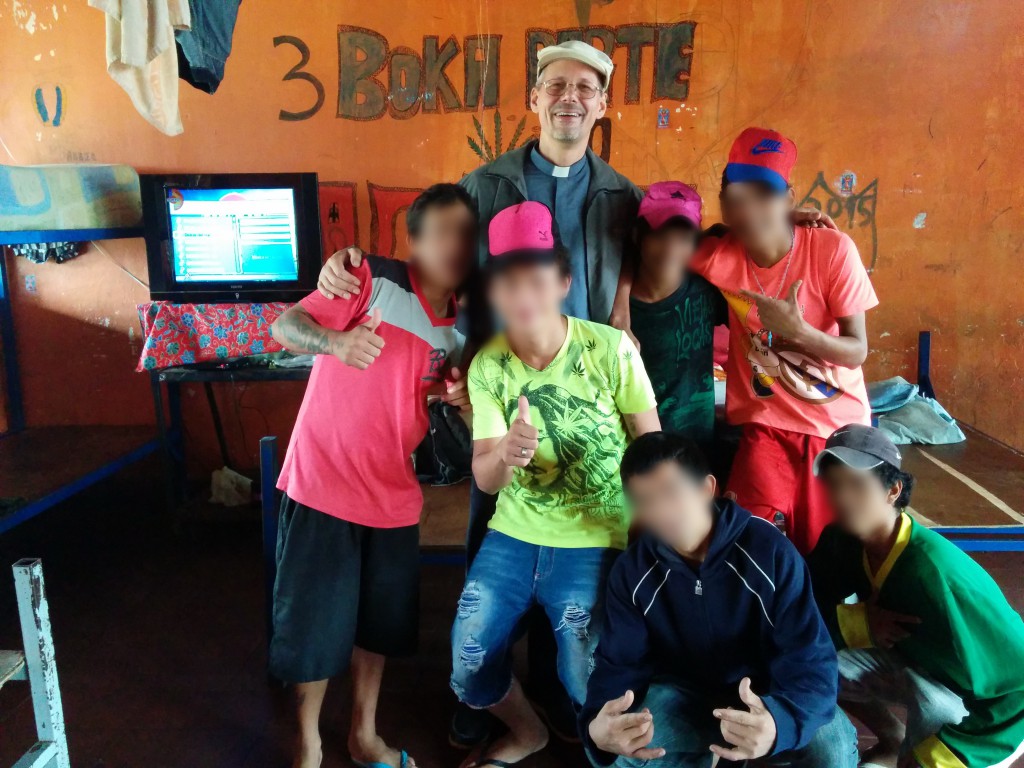 Father comes and everything changes

Father Pedro comes – on a Monday when he usually comes every Saturday and when there is any kind of emergency – and everything changes. Paí [Father] is coming. He plays with them, listens to them, consoles them, hugs them, and is coming; he hears their confessions and absolves them, he’s the one who dries their tears, who seeks lawyers, who takes photos, the one who embraces them, who has permission to come to Tuparenda, and who invites them to dress in white as altar boys and to participate in the liturgy. He is the one who gives them hope to continue, the one who accompanies them although they only come out to return to jail. It is he who takes thousands of photos of them with his cell phone (yes, he is the only one who can take a cellphone into the jail), and he prints the photos so that they will feel like that they exist as beloved and important people. Father comes. Pure paternity. He is the father of these more than 100 youths ages of 14-18. 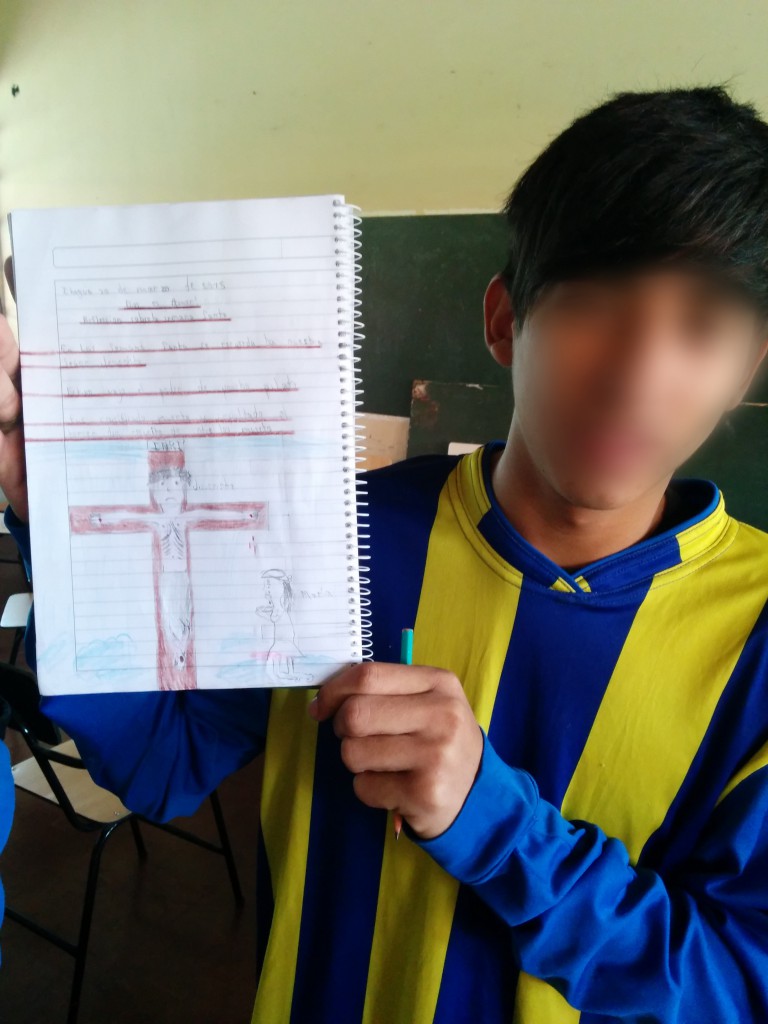 Within the installation, the majority of boys can move around freely during the day. Many of them are in the halls that function as a school within the jail, for many of them it is the first chance to go to school or the opportunity to continue with their classes. Father Pedro encourages them to continue; he asks them to show him their notebooks. Some remain in their chairs, others happily run toward him to show him their work. After attentively looking at everything, Father Pedro goes to one after the other and to those who remained in their corners. He looks, encourages, supports…All of them receive a strong embrace, and all of them want a photo with him, each one with him, two friends together and him, all of them with the teachers, everyone with a lady from Germany who came to visit them, each one with her, and one more photo and an embrace from her…

We go to the cells, where one of the boys is cleaning. Once again photos. “They do not have closets,” Father Pedro told me. “They do not have anywhere to leave anything personal. They do not have personal space…” Is that the reason for photos – “Yes,” Father Pedro replied. “This is how they feel that they are important, that they have personal value.” That is why he sometimes takes them copies of their photos. “And decals of the Schoenstatt Blessed Mother of Tuparenda,” he added. “Many of them love her, especially those who have been there.

A boy, who was about 15 years old, approached Father Pedro: “The other day, my mother came to visit me for the first time since I have been here.” – “How long have you been here?” I asked him. “One year and seven months,” he tells me, and this time my embrace was given before the request.

Some have been in jail for a third time, many for the first time, others no longer know how many times they have been in jail. Father Pedro explained how some lived with their grandparents, since their mothers work in the exterior, the father had left…When the grandparents die, they remain on the street, and on the street, they learn how to survive by stealing or taking drugs. It seems that others are there by error, and they do have lawyers for their defense. “Have you noticed something?” Father Pedro asked me. “Only lower class boys are seen. They are not the only ones in Paraguay who steal or try drugs. But those of the upper class have lawyers and parents who pay…” Before I could ask, Father Pedro spoke about the Movement’s lawyers who help him with these and so many other cases.

We go to the jail’s chapel, this place, where Father Pedro has baptized so many of the youths, where they received their first communion…The chapel serves as a multi-purpose hall, we could not enter at this moment, but through the window, I look and see the picture of the Blessed Mother on the wall. I silently crown her “queen and lawyer” of this place. “Someone should be our lawyer, someone should intercede judge us for our rights,” said Father Kentenich in the concentration camp in Dachau, upon naming the MTA, mother and lawyer queen before the lack of rights. Dachau, here and now. The Mother Thrice Admirable visits her children in this place lacking of rights, lacking honor, and lacking a home. They walk through Dachau like Father Kentenich. She makes a visitation in this Itauguá jail; she walks cell to cell in the person of Father Pedro…

“Not all of them are saints,” Father Pedro tells me. He tells me some criminal stories worthy of a novel, like the tragic stories that are unloaded in long confessions with many tears. He speaks to me about miracles. “It is not about a second chance,” he says, “For many of them, it is the first one of their life.” 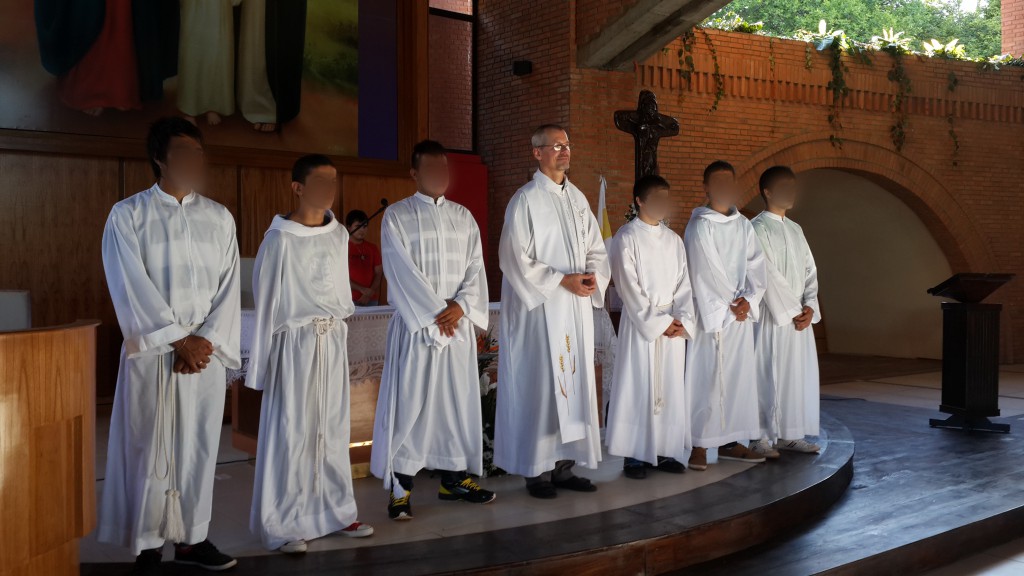 With this we get to his favorite idea: a house in the shadow of the Shrine of Tuparenda, a house for when they are released from prison, and they do not have a place to go… A house where they can learn something, since “they cannot find work with previous criminal offenses,” where they can work to earn a living… With the blessing of a wayside shrine a few weeks after this visit, the dream of this house began to become concrete. My current account is spiritually empty, since what I have in my pockets in cash will barely be enough for a snack of one of these Saturdays when Father Pedro comes… (But least there is enough for this).

“For I was… in prison and you visited me.”(Mt. 25:36). Pope Francis wants to perform a gesture of mercy every month of the Jubilee Year of Mercy, creating something that will outlast the Jubilee. Could Schoenstatt also do it?

Could Casa Madre of Tuparenda be something that will remain from the Jubilee Year of Mercy?

Not everyone has the privilege of drinking their first herbal tea in the Educational Center Itauguá. But all of us can pray for these children, and perhaps contribute something more for the Casa Madre of Tuparenda and of Father Pedro’s work.

It was the best herbal tea of my life. Thank you, boys from Itauguá, for your friendship. 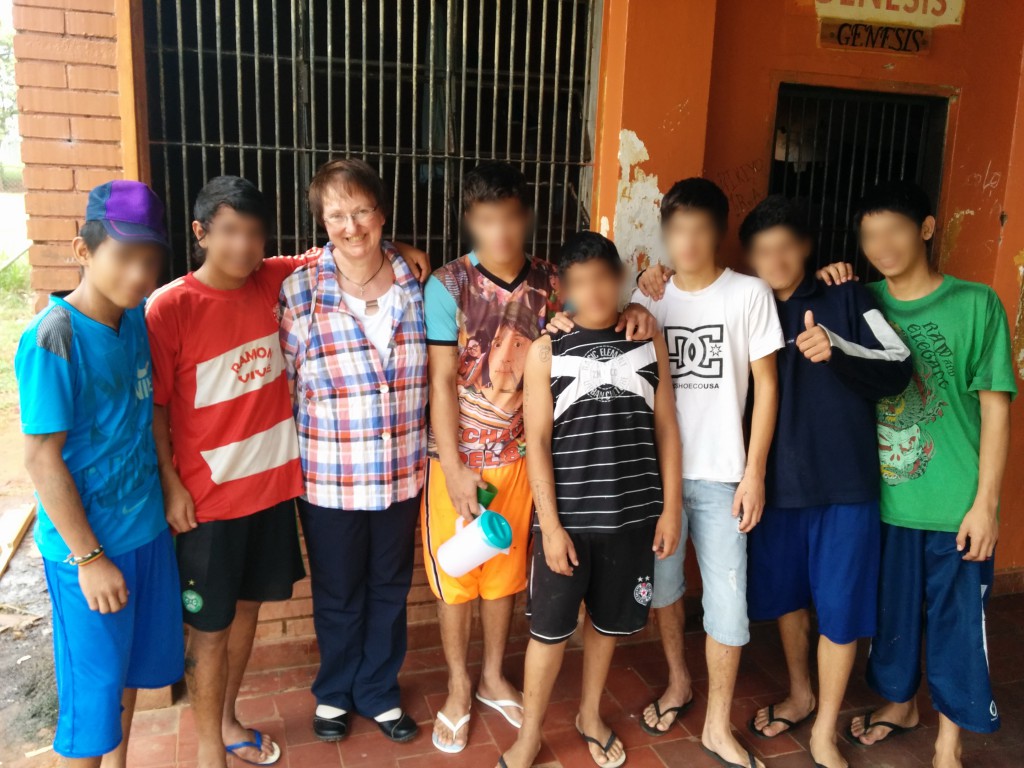